Hyboria is in peril ! 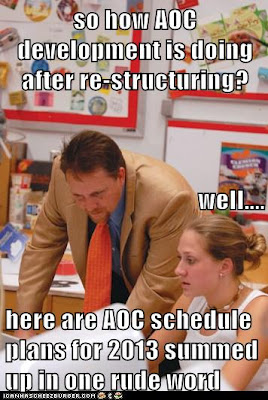 Did I say Hyboria? I meant Funcom. Yesterday we have learned rather troublesome news about Funcom studio re-structuring.If your business model isn't working then I guess it is a good thing to "mix it up". What is NOT good is Age of Conan: Secrets of the Dragon's Spine and crafting update getting sacked for another few months (at very least 3) and the carefuly set schedule is going to hell. I really want Funcom to be successful so they can make more content and keep the game rolling. Bad things tend to happen to AOC.  However every single time when I am thinking: "things are looking up for AOC" Funcom will fail in a major way and it's like watching a retarded bear. No one wants to see that. Want a recent example? FC doing great job on energy/sprint revamp and then a bad job with......fucking up servers for over a month. But this post is not about Funcom and them dropping the ball, it is about AOC. For the first time I am actually afraid that in near future AOC might be gone. MMOs come and go and recent events show that even successful ones can get sacked. People (me included) get upset about Age of Conan and the change in the schedule and so (that is just bullshit), but no one would like AOC to simply go away. I wouldn't want that for sure. All this "re-structuring" and FC's financial situation is taking out the wind out of my sails when it comes to Hyboria. Should I continue to play this game? Should I dedicate any more time at all to this blog? Should I marry of the the devs? (ok I wasn't considering that...yet).  Monthly Development Update - January 2013 says that "All the stuff we have mentioned at the end of the last year, the new Dragonspine content, and the trade-skill revamp is all still in progress. In fact the team has taken pride in finishing up as much as they can to take over to the new team. The new team fully intends to ensure most, if not all, of those content updates are released this year. The schedule however will of course be affected by this change, and the new team will need a little while to set their new schedules, and get things in order. Expect to hear more in next month's development update on that front". This is hardly ideal. SDS update series were supposed to come in summer of 2012 and it seems like it will be early spring of 2013. Yes, we already got SOME of SDS on live server but it turned out to be "all show and no go" type of content where you can do the quest line in one day and then REALLY there is no point in returning to the Spine as it offers little to no repeatable content. I have to admit that AOC real chance to make it "BIG" again and to attract new and old players is a SMASHING crafting system. From what we have already seen on preview video FC actually managed to create such system and it is highly anticipated.
However AOC is largely perceived as MMO "with little development and constant delays" so one can only hope that new team will change that. Re-structing is of course a good thing as the cash flow must be maintained, but more delays on a content promised ages ago is just wrong.

The crafting, for the sake of AOC's future, better be best thing since sliced bread.
Posted by Slith at 11:44 AM

Hey Slith.. It's sad to see AoC and Funcom struggle. I currently don't play, I want to but the whole game is too depressing.

I belive there is a real chance Funcom could go bankrupt, if they don't get new money from investors then it's over sometime in 2013. The restructuring seems to be part of a plan to convince the investors.

The Wyrm dungeon designer haven't logged into TL for more than 5 days, that could be really bad like he got a new job and has quit, or it could mean he's helping out on the crafting revamp to try get it on tl asap.

I don't understand why we don't have gear progression in the game anymore, does it really matter if everyone is about to get fired and the game could shut down? Why not give players a reason to play and subscribe longer. I just don't get it.

Having watched the crafting video 2 times now I am of the opinion that if anything has a chance to re-launch AOC into being more successful mmo is crafting. Even if 75% of what FC told us was true it would still make for an amazing system.

That being said AOC in it's current shape with premium (with little to no updates) and F2F system (free to fail) has to go.

FC is milking AOC with premium because of suckers like me that will just keep paying no matter what (aka dedicated playerbase). However this approach allows to be sloppy with content and won't attract a lot of new people. It is stagnation if anything.

The fact that Conan franchise is getting another look (After 2011 fail of CTB) is a great news for AOC because it will keep the game "relevant".

Your comment about gear progression is spot on. I think FC is trying to HOLD ON to ROGS and to keep it relevant with the rest of the game. They are still making money off Khitai and they will keep making that money (even if it';s very little) if people will want to have that expansion for gear.