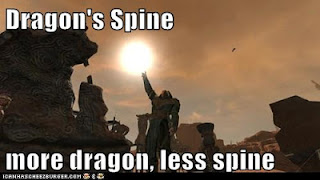 Dragon's Spine is here!
.... and I am giggling like a school girl. Ok, perhaps I am not "KHITAI-excited" about SDS, but it is a solid content addition. Also I had a chance to preview SDS on TL server so it took an edge off the initial "wow" feeling. Oh don't worry, there is plenty neat things here and more to come. This post will be, I am afraid, super chaotic as I am trying to squeeze in my first  impressions of SDS. I love that new content smell, it's like used car after going through automatic-car-wash-thingy, it's still same car, but it looks great.

PVP - day 1
First thing first is the open world PVP: as you can imagine DS became got-to-place for all lvl80 that are, as I am writing this, duking it out under the hot hot stygian sun. As you might imagine many outstanding individuals perceive pvp as merely application of this simple schematic: stealth, wait for target to be fighting mobs and well below 40% HP, attack and make sure you are a ranger. During my initial questing I got killed few times while fighting mobs or talking to NPC. This, of course, is hardly ideal, but I guess you have to take the good with the bad when it comes to pvp. World pvp gives freedom, a freedom to loop off any ones head if you simply feel like it. This freedom is universal and if you can't accept that then perhaps PVE servers are the way to go. Some people swear that they "love open world pvp" but said love is only displayed when they are actively looking for that type of activity. Otherwise they get angry when they are questing and sudden pvp encounter disturbs their proceedings. For this people there should be a server type PVP-OWICFM (player vs player only when it is convenient for me). Few weeks ago I was doing some leveling on my "kinda-alt" (but not really) and some douche-bad was attacking my quest mobs. My first reaction? You are so dead brobro! Oh wait..PVE server.. Ok now I am just ranting mindlessly now. Will this be new Kheshatta? Time will tell.

The visuals and the design
The new zone is unlike anything we have already seen in AOC. First thing first: it was build from ground up with new Dream World engine and it really shines, especially compared to old world deserts in Stygia. The zone simply looks mighty impressive and I will have to give credit where credit is due even thou I HATE DESERT zones. There, I have said it.Does it have sand? Yes? Then I am not all that interested then. And yet Dragon's Spine managed to capture my attention and it's sand is slowly getting into my every nook and cranny just like corruption got under my skin and into my heart in Kara Korum. "Slith, what the hell are you raving about?" All I am saying that I used to hate Kara Korum and it has won me over since then and Dragon's Spine is like that too. I don't know, I can quite put my finger on it: this place is strangely familiar and totally alien at the same time. The name of the addon "Secrets of the Dragon's Spine" is simply perfect for there are secrets to be found here at every step. All the parts of this zone are connected in most clever and unexpected ways and there are many secret passes to be found. This zone is not the "classic" desert with endless dunes and open spaces but it covered with canions, big rocks and small mountains. The zone just feels like it was designed and hand-crafted rather than put together in random fashion or computer-generated.

Quests
The questing system which surprised me greatly: the quest are all on connected in most peculiar ways. In old world you usually have one main story line for the each play field (like frost giant in Ymir's Pass) and the rest of the quest are "filler", simple chores quest that you have to perform on NPC's whims (i.g. kill ten rats). In Khitai the story is mainly faction driven and your progression is limited by your faction reputation level. In SDS doing one quest can unlock or update others. For example I was sent to gather wood for barricades, but while chopping down the tree I have "unlocked" one of the steps of totally, seemly unrelated main quest. There are repeatable quest in SDS with cool downs like in Khitai, but so far I haven't seen any faction that I could join. The SDS was supposed to be launched as a whole, but Funcom made the decision (good one I might add) to split it into several installments. This means that the SDS zone will have stuff added to it as more and more updates are put onto the live servers.

Story
As always the story and the dialogues are well written. The mature themes are ever present in SDS. For example a ghost that you will meet underwater used to be a girl that got ravaged by a monster both psychically and sexually.Of course the "mature" themes are not protracted solely by including rape reference in every quest, but it shows that the writer is not afraid to explore some topic that might make the player uncomfortable.I won't spoil anything, but lets just say the writers may or may not have used A LOT of Kull the Conquerer lore (it is R.E.Howard's character too). Not sold yet? There are some things taken from...Dune series by Frank Herbert. What I also enjoyed is that Age of Conan self references: some NPC will talk to you about Khitai's faction or House of Crom - things created solely for AOC.

Dungeon
I have run the new Wyrm dungeon and it seems like good fun. It very much reminds me of Khitai HMs with little to no trash mobs, just pure boss spanking extravaganza.  First boss is simple tank and spank but the second one made us work for the kill. Haven't tried the last boss.

To sum it up:
So far so good. The launch of SDS was extremely smooth and bug free so it gives me a lot of hope for the future content. Now bring in the crafting revamp! That is the reason why we are all here after all :P

In one particular moment while I was fighting with ONE mob and couldn't keep my shit together, I saw the light: I had the go back to and be done with Khitai (first things first).

Although I also hate deserts, it seemed like a great addition to the game. One consolation would be that you'll probably consume every content there is before I get there and I'll have guides to read for progressing smoothly.

oh hell yeah, you need to have Khitai beated and beaten HARD. SDS is a HUGE gear check.