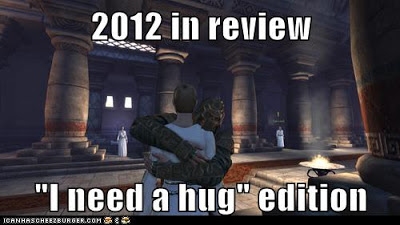 Once again, once too many times, the season of "savage reviews" is upon us and I am here to chew AOC and spit it out. Or am I? Was 2012 a horrible year for the game or perhaps it was necessary to pave the way to this game's future greatness. Well, grab an ale and warm up yer bones near the camp fire, you are about to find up. Before we dive into the review itself you can now check pass reviews, those dating back to 2008 even under new "yearly reviews" tag. Check it out for comparison purposes.

This year I have decided to change the review process and talk purely about the content/changes and my personal take on them. The old system with the scores doesn't make much sense and, sadly, for most part it would still be a copy/paste job..third year in a row for some items like sieges..
Below you will find the most important additions rounded up into several categories likes dungeons/system changes etc.

Dungeons and Raids
By CROM! What a worthy addition to the game. House of Crom - both group and social dungeons - are great experience with well written story behind it. The visuals of HOC are simply a benchmark for any future development as they have easily overshadowed anything done to this date. At the same time HOC is a classic example how HORRIBLE itemization can be. The dungeons drop tons of blue gear (all looking great except the assassin one which sucks) but all of it obsolete: if you can get it you already don't needed it and if you need it then chances are you are too under geared to get it. You can also get a nice epic cloak from this place (almost same stats as khitai one) but it is so easy that you can get it in 2-3 runs tops. Really, this place is for rare farming and those rares can be spent only in far far away Khitai which kind of defeats the purpose of having Atlantean themed dungeons if your rewards will ultimately be bought from Khitaian vendors. I am very bitter about how HOC turned out to be rewards wise, but it will always have a special place in my heart. I had my share of fun in here.
A major content addition in 2012.Duh. I find it very questionable as to why FC finally completed T4 encounters 2 years after the release of ROGS, but I digress. I have tried T4 two times or so and if I was in T4 raiding guild (which I am not) then I would be raid this place weekly. That is good. My only complains, as always, is assassin armor design. Worst-armor-ever. Considering the amazing looks of ROGS armors T4 pieces are a major let down.
A remake of classic DMH with harder mobs/bosses and rare token rewards. This is how it should have been since day one after Turan release. I am not a big fan of Turan addon and DMH is one of the reason for that. I don't like the story, writing, design or the very idea of private questing area as it defeats the purpose of MMO. I guess FC did what they had to fix this garbage, but it's a patch work at best.
Another case of half-baked idea that needed a fix. Really, it boggles my mind that the devs have made this dungeon almost 2 years after ROGS and didn't have a foresight to predict that making a solo dungeon on par with old world villas will not provide sufficient rewards and challenge to people in Khitai armors with AAs. This was a fix to an old content and as such it is barely an addition at all.
The cream of the crop of bad design. I don't think there is a single piece of AOC content out there more "not played at all" than this garbage.  Funcom pretty much scaled up the HPs on the mobs and threw in few blue items and slapped "unchained" sticker on it. Guess what? No one does it. I have barely managed to scrape together a team for it on it's launch day. Never have I seen a LFM message for this dungeon on global chat. Perfect example on how to NOT revamp old content.
I have mixed feelings about this dungeon. It is an old content revamped into new high end dungeon and taking it for what it is I would say it's good. But in post House of Crom expectations AOK falls short it terms of visuals and design. I wouldn't really mind because it's re-used old content so the expectations should be lowered, but AOK went live with TONS of bugs, I mean with some really nasty stuff (like Khitai pets usable in the dungeon, being able to rejoin the boss fights after death). Clearly a rushed, half-assed content, done it a half-ass way.

Systems
Before I go about the specifics I have to mention that all of the system changes were greatly resisted by some who were prophesying about how that single change will "KILL AOC". To give FC credit where credit is due they stickied to their guns with the base concept, but they listened when it came to fine tuning the stuff. The result of system changes is awesome and in all cases I wouldn't want a roll back to the previous versions of the game.

Class changes
I have no say whether those changes were good or not because I don't know these classes and I didn't bothered to ask anyone. It didn't break the pvp for me so I am content. It is good that Funcom is doing something in terms of class development and that it is not another assassin/ranger full blown "tear it down and start again" kind of revamp.
To sum it up....
That is what we got in 2012. Good or bad? If you are a raider and on top of that you got several alts then this year was great! Changes to your classes, substantial content and furthermore less grind in Khitai and easier gear for alts (more rares from solo dungeons and epic legs added to vendors). So why this review is the "I need a hug" edition? It was HORRIBLE, HORRID and ATROCIOUS year for me: fully geared non-raider with just one character that didn't get revamped. Need to say more? I haven't been this bored since patch 1.5 when I have hit the brick wall with getting to pvp lvl5 (back then it was HARD) and had nothing else to do than re-running villas for absolutely no reason at all. In patch 3.0 era I am capped at pvp lvl 10 with both pvp T2 and T3 sets, Brittle Blade epic set, almost fully unlocked AA tree and 600 rares that I have nothing to spend on. Hardly ideal. I am missing means of progressing my character and I am afraid that new Secrets of the Dragonspine will not scratch that itch. I am jumping on and off with my semi-alt barb and re-doing low level stuff (like Field of the dead which was great), but I am fully aware that it's not because I am bored with assassin class - it because at this point I cannot progress any further. I will see how things will turn post SDS, but in the current shape - if the game would stay like this forever - I would be done with AOC. A lot of expectations for 2013.

its time for alt or raid.

Very good review and sums it up pretty nicely.
I can only add that if you feel like your sin is starting to be outdated against all those undying soldier classes you can just imagine how does the players who still "try" to play HoX feel about the game right now. Even a sin for them is pretty much a no win situation.

I like many changes in game during 2012 but like you i stick to one class and unfortunately that is HoX and trying to PVP with is just really depressing.
To sum it up HoX is "all show no go"

I really hope 2013 brings revamps and old bug fixes to classes straight after the new content.

Why doesn't this one feature a ninja-cat picture?

btw link to the "khitai changes report" is broken. it has an extra ")" sign at the end.

as for lolcats...I kinda got sick of them after all those years

i been gone from aoc for 2yrs, and im haven ablast, love the updates like sprint now. cant wait for dragon spine!

oh yeah, I am only bored because I have been here so long with one character. If I were you, back after 2 years, I would have shit my pants with joy :D So much to do..

I have had a 6 month break and I love playing aoc again. But I have some of the same problems as you do. I have a fully (-ish) decked BS and really love playing BS more than any other class. My solution was to roll a new BS. I now have a minty fresh BS alt and everything is new again. T1 raids, khitai the lot.