Dagger and a bowl of rice: more rice, less grind 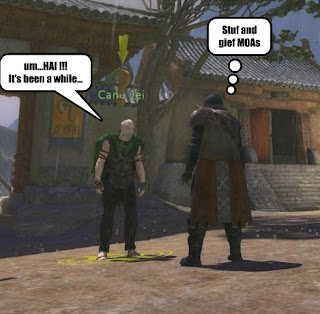 Good news everyone! Right now Rise of the Godslayer has arrived to the state that it should have been since day 1. Shouldn have but wasn't.  What matters now is that this 2 years old expansion got finally polished and worth giving a second chance by all those who got turned off by the amount of grind. And if you don't own Khitai yet? By Crom, you are in for a treat!! Let's go over the changes that made Khitai the expansion it is today:

Marks of Acclaim
The dreaded MOAs are tokens which serve as a form of currency in the land of 999,999 Gods. Pretty much everything costs some amount of MOAs or MOAs and gold. Furthermore MOAs can be spend on potions that, when consumed, grant the player large amount of mastery experience. Thanks to the questing system revamp turning in the quest to the NPC now gives large amount of MOAs. For example: simple Brittle Blade quest in Chosain used to give 2 MOAs and after revamp same quest gives 18 MOAs. Where is the catch? The grindy feel of the Khitai was mainly caused by re-doing simple and fast quest that were giving small amount of MOAs. Those quests had short cool down so the player could pick up few of them, do the quickly and return to pick them up again. The revamp brought in 20h cool down to all completed quest. On one side this prevents players from re-doing the quests over and over, but it gives great  rewards instead. This grants players a lot more rewards for shorter time playing which they can now utilize to do other, more varied quest and get even more rewards. Rewards simply keep on giving. Don't get me wrong: MOAs are not raining down from the skies, but getting them is a great experience. I have no doubt that this is how things should have been. This change is also benefiting people with alts greatly, because it let's them do few quests here and there while changing their characters and STILL progress at reasonable pace.

Faction Progression
Factions and story behind them were always the highlight of ROGS. The story is simply delicious and the experience is memorable to say the least. One of the biggest woes of ROGS at launch was that leveling faction ranks was nightmarish experience. The questing changes also addressed that by granting more faction rep for each quest. Furthermore old and new solo dungeons now grant quite sizable box filled with faction insignias that can be traded via faction NPC for reputation. Don't want to re-do some quest? You can now skip them simply by spending your insignia. I know that it always worked like that, but now you have viable means of getting those insignias through solo game play. So how big are those changes? Let just say that previously gaining rank 4 was taking weeks and now it's something like 10 days or so of focused game play that is with about 1h long gaming sessions. No, really it is super smooth now, you can easily rank 4 with all of your characters.  The game got "alt friendly" in a BIG WAY. It is still challening for freshly dinged characters, but veterans can burn through faction content if they are simply re-doing them to switch their alliances.

Gearing Up
Another woe of ROGS was the problem with gearing up. Old world gear is not really viable in Khitai because it lacks the ciritigation stat. People needed to run the Hard Modes in order to gear up in Khitai epics. Don't have Khitai gear already? Then you can't get into Hard Mode groups. But wait, can't get into Hard Mode groups? Sorry, no Khitai gear for you. It's the catch 22 of land of the 999,999 gods. Funcom addressed this problem from several angels. First the Khitai epics that you can buy from NPC got their gold price reduced and since getting MOAs got a lot easier the first NPC bought epics are within everyone's reach. Seriously: hands and boots are two easiest epics you will ever get. You can now also get rare tokens (needed to pay for your epic gear) from solo instances:  Refuge of Apostate (daily 2-3 tokens) and Lost City (daily 1 token). If you do own Savage Coast of Turan you can also try doing Isle of Iron Statues (daily 4-5 tokens) and Dead Man's Hand (daily 3 tokens). If that wasn't enough you will always get rare token for doing the Khitai instances in normal mode, so if you want to you can gear up so eventually you can run Hard Modes. While all this solo stuff might sound like Khitai epics got turned into "welfare" epic but let me assure that it is still challenging  enough to gear your character. The only word that comes to mind is "reasonable": you will get your items soon enough but it won't be walk in the park. I like that.

AA system
To put it in few words: quests give more mastery and solo instances grant mastery pots so you can smoothly progress with your AAs. For my character it takes around 2 days of 1 hour sessions to ding full mastery level. Mind you this optimization is available for my character through a lot of gear and AAs, but it shows that at some point you will be able to gain power very quickly. If any thing the changes allow people to "catch up" if they have been on a break or just started their journey through Khitai.

To sum it up: I do recommend to give ROGS another shot if you got turned off by the endless grind because that has been fixed. On the other hand if you quit AOC simply to try other games then now is the time to go back, it's better than ever.
Posted by Slith at 11:21 AM

It certainly is a lot easier than before. With a couple of Easy mode instances and a few quests, my conq has his first piece of Faction Armor for Khitai. I like the current revamp of ROGS.

Slith I give you one advice I was AOC fanboy really but last two months of game for me and then GW2 pvp with friends no gear dependancy. Come and play GW2 with us! :P

I am more of REH fanboi than AOC, but there is really one thing that keeps me away from GW2 (played some GW back in the day):

yesss,...well that is big NO in my book.


nooooooooooo 0_o I didn't know it was THAT bad...

Yup I had same feeling, asuras, charrs and sylvarii look terrible and that asian look also but at least it has nice pvp content and no pve grind for pvp like AOC...and I cant play pvp with friend I cant find group for pve when I WANT and thats bad AOC is slowly and I mean slowly dying GW2 will take again some pple from AOC for sure. Bad days incoming. But who knows maybe Funcom will make more than one minigame in next 4 years.