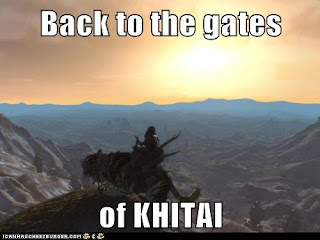 Finally things are looking up for Age of Conan. And I mean it. The patch 3.5 turned out to be, after two downtimes for hot fixes, a pretty great one. Let's briefly go over the improvements to the game:

This is a game changer. For the first time in four years I have ran pvp minigame, group HM in Khitai and a raid with a dedicated specc for each. Delicious! The system allows you to set up 2 pre-defined speccs (3 if you have bought extra specc slot for 500 FC points - which I did) and switch between then at will. There are just three limitations: it has 10 minutes cooldown between switches, you have to be out of combat and only NPC can reset the trees (this hasn't changed). Furthermore anything you put on your bar (feats & perks) is saved. If anything this system encourages varied gameplay and makes transition between different activities silky smooth.Funcom will expand this system and add more features in the near future (like sharing the builds via links).

Into the Breach (group version)

Yes, once more we go into the breach. While it is still unknown whether this instance has Hard Mode or not it is good at what it supposed to be delivering: fast & fun gameplay. This dungeon is ultra quick while mantaining some level of difficulty: this is not pure stomp. If automatic LFG system/group maker makes into AOC this year then I can totally see myself jumping in for a quick "Into the Breach". As it is now ITB makes a great dungeon for fresh lvl80s (challenging even). The bosses mechanic are interesting while not making overall experience unnecessarly complicated. Certainly this is not a "solid, long lasting content", but leaving ITB being just solo experience would have been a waste.

Dead Man's Hand & Lost City + reward revamps
Funcom again upgraded the game for the solo experience. Just like ITB both Dead Man's and Lost City were great visually, but there we lacking two essential elements: challenge and rewards. For an advanced lvl80 player going into DM and LC was a waste of time since the mobs were dieing absurdly easily and the rewards were...let's just say I would enjoy finding turd in the loot box more than those damn green trader-trash items. Dead Man's can be played in two ways: you can use it as a source of Hard Mode tokens by doing the main quest of finding and killing the traitor. This way you will get 3 tokens, over 100k mastery and some social drops. All this will take roughly 12-15 minutes which makes great addition to your daily rotation on solo dungeons. The second way of playing DM is actually doing all the side quests located around the Island. Those quest won't give you any upgraded rewards but the mobs are challenging and they can now drop bags that actually might have something worthwhile in them. DM might be slightly harder than Apostate, but easier than Iron Statues hard mode. LC remains an easier dungeon, one that should accommodate people that have just entered Khitai and are looking for something different to do. LC gives 1 rare token, mastery and insignias. For my assassin this dungeon was still slightly too easy, but would have been perfect when I have first set my foot in land of 999,999 gods. Funcom went ahead and also upgraded existing rewards in other solo dungeons. For example Refuge of Apostate is now providing brave adventurers with mastery pots (last Boss drops blue pot with 50k mastery). There are other changes that make progression in Khitai more smooth: you can now buy faction leg armor (previously only dropped in Enigmata dungeon) and the cost of epic pots is reduced (15 rares = 1 AA point). I cannot help but wonder that Funcom wants to prepare us for the next add-on by "helping" players to progress through Khitai faster.

Stamina/sprint revamp is coming!
The first version of long awaited revamp is already on TL. Since it is pretty hard to do it justice with just words and pictures I am including a short video from TL. Its about time we got this change in!
Ignore end credits in the vid, I have messed up real bad :D
To sum it up: great patch and more good things are on the horizon.