Lore Whore - classes and their roots 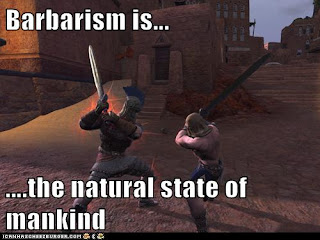 Since AOC's day one there has been some talk about how the it doesn't make whole lot a sense for certain classes to be associated with certain ethnic groups.
While it is easy to imagine that Dark Templars should have been made a choice for Stygian and not Cimmerians, but I personally have no beef  with the existence of Aquilonian Barbarians. I do despise Cimmerian Rangers.
A Common misconception about Aquilonia is thinking of it as a highly civilized Roman Empire. Aquilonia had it's provinces:

Potain (land of warmth and plenty ), Gunderland (best footmen soldiers in Hyboria) and Bossonia (amazing archers and defenders). Not all of those provinces were up of standards you could get used to living in Old Tarantia.

"That was true; the Bossonian marches, with their fortified villages
filled with determined bowmen, had long served Aquilonia as a buffer
against the outlying barbarians. Now among the settlers beyond Thunder River here was growing up a breed of forest men capable of meeting the barbarians at their own game, but their numbers were still scanty. Most of the frontiersmen were like Balthus--more of the settler than the woodsman type."

REH,  Beyond the Black River


I think Bossonians are the closest thing in Aquilonia to "barbarians". Keep in mind that thanks to D&D influence barbarians are through more as a "class" (like assassin/rogue) than what REH intended.  It totally makes sense for Bossonians ("breed of forest men")to be regarded as "barbarian class". They are not, however, barbarians per se.

As for a bow: Conan was excellent marksman and used the bow often and to a great effect.

"Give me a bow," requested Conan. "It's not my idea of a manly weapon,but I learned archery among the Hyrkanians, and it will go hard if Ican't feather a man or so on yonder deck."

Standing on the poop, he watched the serpentlike ship skimming
lightly over the waters, and landsman though he was, it was evident to him that the Argus would never win that race. Already arrows, arching from the pirate's deck, were falling with a hiss into the sea, not twenty paces astern".

REH, Queen Of The Black Coast

It is weird that Conan had to learn the bow from Hyrkanians. If Cimmerians used the bow Conan would have known it. There might be a chance that "archery" is a different art than merely "hunting with bow", but I don't know anything on that subject.
Wikipedia suggests that the usage of bows was not as wide spread as one might think. It is very much likely that the Cimmerians hunted with spears alone.

There is a little hint about that in "the Cimmeria" poem by REH:

"It was so long ago and far away

I have forgot the very name men called me.

The axe and flint-tipped spear are like a dream,

And hunts and wars are shadows."

So next time you meet Cimmerian Ranger that is into RP do ask him where did his character learn archery. It sure as hell wasn't in Cimmeria.

I would rather say, that not near evrybody in cimmeria know how to use a bow. ITs not like evry medivilish, or erlier man of war now that art. He may, just master it thanks by hyrkanians.

Of course not everyone knows bow in Cimmeria, but Conan's comment is very strange: it is not my idea of mainly weapon. He clearly despises the bow. This makes me wonder whether Cimmerians don't use bow because they don't know it or they don't use it because they do not aprove of it.

I will look into other stories to see when Conan used the bow. Can't think of another example than Belit story.

Watch 300. You can then see the reaction of ancient worriors against bow. As a weapone bow in ancient time was considered a weapon of cowards and weaklings. Men fought with other men face to face right? It is ofcorse changed in a cors of histery, especiely after sieg warfere begin to be day to day activity. But on the other hand bow as a hunter tool never was despised. Thats number one, number two, cimmerian usaly despise wandering, and traveling, yet the best known cimmerian, was in evry dungeon in evry corner of world ;) O

yes, I will agree that Conan is far from being average Cimmerian.
Sadly we won't solve this mistery as there are hardly any references to Cimmerians per se in REH books. ;

I think that the roots of the Ranger was more to balance out a primarily melee culture of the Cimmerians. I doubt it had anything to do with lore per se. It was a simple tactical mechanic to make the culture more competetive in game. This is kinda sad in it's own right, but remains true. The Bossonians who fell under Aquilonia as well as the Hyrkanians really should have been the only ones able to use a bow in combat. That being said, bows were common enough in all ancient cultures for the purposes of hunting, just not always warfare.

As to medieval...well REH created Hyboria in a mixed image of several eras at once. The idea of a crossbow in this game has always made me laugh. It's a tech that one wouldn't think even available.

The ideas of the ranger really are anti immersive and smacks of MMO mediocrity.

Also keep in mind, REH was holding bias against any culture that would use less than face to face melee in combat. He might have been trying to show the evils of technology.

That being said, AoC is in fact an MMO that needed additional classes to make the game itself viable. Personally, of all the classes, I despise the ranger the most. In PvP,they tend to be one shot wonders. In pve, they seem stupid as thier draw time is so slow that the shot is executed around the time melee range is going on.

Although not part of the original REH lore, "Conan of Venarium" by Harry Turtledove focuses on Conan's youth. In the book there is virtually no mention of him using a spear, but he uses bow and arrow, snares and birdlime to hunt. Several of his early confrontations happen with the bow, and he shows himself to be both confident and competent in battle as well as on the hunt.

personally I am more of REH purist so I avoid any non-canon Conan.

I understand, in the end I am too. I also agree that the other writers at times completely failed to acknowledge or completely contradicted the original works in their own writing. But in terms of the game, and making expansions on it, there is relatively little REH work to go on. Also as a game designer, why would you ignore a vast body of ready made content?

On a positive note, as I read more of the other books, I enjoy the game more. I have noticed that there are quite a few characters, places and other things from the non-REH books in the game, which is very satisfying. It's sad to see that there are so few people who even know about Robert E Howard in the game, but then also even less know of the other works. I've messaged people in game who have names from books both original and later, and so far it has always been by coincidence, and not because they're a fan of the books.

I like to think that REH really experienced pre-cognition of prehistoric times and Conan indeed just told him his story and REH penned down. At least that is what REH claimed (gotta do post on this).

This is why I don't read non-canon stuff, its like reading fan-fiction about real historic figure - I rather read the real stuff.

At least I think this is what preventing me from enoying other authors, I don't think it is "real".