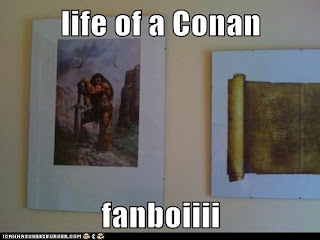 Today I want to talk a bit about my love for the all things REH. I find that there are very few AOC players that in fact know things or two about Conan. Sadly most are as clueless as general population with their preconceived notions of skin clad, brainless barbarian brawler that drinks, fights and womanizes. While that is
true to some extend, I cannot help to notice that this image of Conan is mainly a blend of 70' Marvel comics and 80' Arnold Schwarzenegger movies. Those have one other thing in common: both were bad.

I think I can safely say I am REH purist or....Conan nerd. I love all things that are REH cannon and despise anything that was not penned by Mr.Howard himself. There are some exceptions: Dark Horse Conan and perhaps Savage Sword of Conan comics. I like those because, rather than re-invent the wheel, those build upon the foundations that REH has set. Same is true about Age of Conan: I can say many bad things about Funcom, but when it comes to the creative and respectful use of the lore they are amazing. One of my main grudges against non-REH is the above mentioned lack of respect for both the lore and the reader. Conan pastiche authors simply DO NOT research the world nor the Conan character  and therefor are making them inconsistent with REH's vision. I bet you would like an example? Here you are: 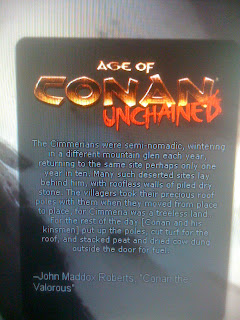 J.M.Roberts writes: "for Cimmeria was a treeless land...". This kind of thing makes my inner nerd, rage SCREAM and throw the book against the wall.

*deep breath* Ok Mr. Roberts, I would like you to take a look at a poem by REH called..."Cimmeria".  To make it easier on you, since you obviously don't like reading that much, I will just point your attention to the parts of poem that should have been of an intrest to you:

The dark woods, masking slopes of sombre hills;
(...)
Slope beyond slope, each dark with sullen trees,
(...)
And the dark woodlands brooding over all,
(...)
The dimness of the everlasting woods.

Same goes for other authors like De Camp who also has written some dumb shit (like Conan learning magic *face palm*).

So I am mostly re-reading pure, unedited REH stories and honestly I am enjoying them each time. More So I am finding those little details that REH is giving out about the Hyboria which make me smile. Example: there are several references to legal system in Hyboria. Apparently Aquilonia had some kind of supreme court that defendants could appeal to, which implies a very advanced legal culture. See? It's not all about splitting skulls and grabing some gal's ass.

I would like to very much encourage you to check out REH's Conan or, at a very least, to check out Dark Horse comics featuring Conan.There are over 75 non-REH Conan books written, but I simply cannot stomach those for I am of an option that only Howard did justice to Conan character. I cannot help but wonder what other, breath taking stories would REH had written if it wasn't for him taking his own life. And perhaps, just perhaps, I will one day visit REH's museum?

Could you tell something about Polish translation?

those are from the 90'. REH edited by De Camp and translated into Polish. The translation is very well done. Each book has amazing Frazetta art on in.

if you are from Poland you can get those CHEAP on www.allegro.pl

I havent read that much conan, to be honest. but i own this book, where all of REH's short stories are gathered. i have to say that the old original conan is much more enjoyable than the conan we see in movies and cartoons!

if the right people got the conan license, they could've made a lord of the rings quality movie out of the stories, in my opinion!

Thank you for sharing your passion about Hyboria, but why for puple walls in your room. WHY! it is not barbaric :)

yeah Conan the barbarian and pink walls;)) Slith you are very enigmatic:)))

Most enjoyable Slith. I enjoy Hyboria as told by REH, though his penmanship was a bit pulpish. Perhaps thats what put the magic into his works. I have to laugh sometimes as I see he writes Conan into a lot of silk loincloths...kinda funny lol. anyways, for those who cannot get ahold of hardcopies, you can go to the gutenberg project and read all of REH's works on digital copy.

guys guys, those walls are not pink, but purple..

You're my kinda Conan fan. Kudos