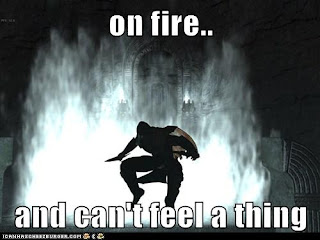 Dull pain and Lotus Overload are mandatory for any serious build because those gives unprecedented survivability against magic users.

There is a difference between what Dull Pain and Lotus Overload do.

Dull Pain will grant protection is called "invulnerability". It will upgrade your spell mitigation up 90% for the duration of DP.

It doesn't matter whether you have 0% or 18% of certain spell type mitigation (like unholy) - Dull Pain brings everything up to at least 90%. Whatever spell is used against you will be mitigated which means the damage received will get reduced by 90%.

You will either resist the spell and not get hit, or you will receive full damage. Dull Pain will always mitigate damage, but never fully and can be partialy by passed by your opponent'ss spell penetration proc.

So as you can see both of those feats have their advantages and this is why you should get them both.


Lotus Overload + Side Step
Side Step (tap 2 x left or right) gives +10% immunity so using it with Lotus Overload proc will give you total immunity for 4s.

Lotus Overload + CC
The immunity granted by LO will work also against spell based CCs such as fear or assassin's stun. LO user can also resist miasmas so for example: your target has SDS poison on him, but he resists your face stab (which is a spell) the miasma will not be consumed and no damage will be applied.

Dull Pain usage
Dull Pain is a staple of assassin vs assassin combat. Since assassin's damage comes largely from unholy the dull pain can mitigate whole detonation.Keep in mind that HOLY type of damage is not on the list and therefor Dull Pain is useless against Priests of Mitra. It is very beneficial (especially against Hox/Assassin) to stack Cat's Paw with Dull Pain for added protection, especially when you are picking up the flag while being attacked. Dull Pain is overall more preventive than reactive: I advocate using it when engaged in large fights to avoid magic aoe rather than trying to anticipate magical attack. The only exception is detonation because the icon is clearly visible and the explosion is delayed which gives plenty of time to use DP.
It can be also used by undegeared assassins to beat the boss in Refuge of Apostate solo dungeon because his hard hitting attack is magical.
Posted by Slith at 1:26 PM