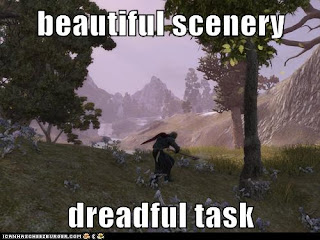 Oh Bori...what happened to you? You used to be cool....Wait a minute! No you didn't, you lazy bastard, you were never cool!! I knew that this day would come eventually so I have decided to fully embrace it. I am minigame-leveled pvp lvl 10 wearing minigame pvp lvl8 armor and digging rocks in Cimmerian lands. Go figure. At this point I am pretty much without any goal when it comes to Age of Conan since I have beaten all the content that interests me and got every single bit of gear that I wanted. Took me 2 years mind you, but yeah, at this point I am DONE. I don't want to be done with the game, but I am not going to lie: just roaming random minigames ain't going to cut it. Mining rocks in Boredom Kingdom might not be the greatest goal of all times, but it is A GOAL and that seems like enough. I want to get the Bori armor (aka pvp lvl 10), but mostly for vanity reasons since the stats upgrade will be marginal. I really like how the pvp lvl 10 armor has face covered ninja-style and in that regard pvp lvl 8, although with cool black color, is sorely lacking.

So how is Bori in 3.5 reality? I wish, how I wish I could write you a report saying: it is totally different experience than what I despised 2 years ago. Sadly, no, no it is not. Same old same old. The only noticeable difference is that the zone is pretty much unmolested during off-peak hours. Sure, there will be some gank-squads popping in and out from time to time, but those are not what they used to be. Since I am soley interested in obtaining tokens in a most speedy and efficient matter I get really annoyed, by people coming to Boredom Kingdom to......*gasp*....PVP!!! That is the real curse of Bori: it discourages PVP. I knew that a while back, but it became painfully evident during those last couple of days when I have made up my mind about "seriously farming that nodes for armor". There are no winners in those scenarios when others come to disturb the farming process. People farming the nodes are interested only in farming them and getting out. People coming in are interested in PVP, but they are not getting it from people preoccupied with farming. It is hilarious to see people in Bori armor "trying" to prevent others from getting same armor...through same means as their "hardcore pvpers" did...farming nodes. I don't think that Bori will ever be fixed and most likely be left as it is. If we ever get new pvp content then Funcom will address the Bori issue in most simplistic way: by introducing third type of pvp token and by doing that FC will insure that merely farming nodes furiously won't cut it. I firmly believe also that we won't see level cap raised anytime soon but rather additional armors. Time, as always, will tell.

Since I am writing this post in small batches over last couple of days at this point I am having slightly altered opinion: I don't think I can go through with this. I have managed to gather around 1.000 tokens and I am DREADING the very thought of logging into Age of Conan. This is my cut off point: if it is not fun then don't do it. I am sure that I would have had motivation to "keep on keeping on" with the farm if not for having my minigame gear. Seriously, I find it hard in my head to justify hours upon hours of mindless farming just to take "advantage" of mildly better stats with marginal impact on my pvp performance. Should I skip the Bori armor? All signs points to yes, but in the land of Hyboria, where pvp content is rare and good pvp content is an unicorn, one can never be too sure.
Posted by Slith at 7:23 AM

I feel for you SLith. It sucks that Bori became a farming node because FunCom made it a pve activity. Mind you I am not a PvPer by any means but I think they have allowed pvp to shrivel up badly. They claim they are working on it, but as much as I am a supporter of the game, they really haven't. I hear promises of more pvp stuff after TSW launch, but I remain skeptical. There was a time when population was better on Cimmeria (RIP) that Bori was kind of fun when a few of the guilds would call out folks to make teams and go at it. But with no real objectives that died out pretty quick.

I wish they made the towns in Bori an objective. IE holding certain points would give guild wide pvp xp or something. I dunno, maybe I'm not thinking it through either.

Just wish they would take serious consideration of open world pvp suggestions. There have been a ton of them on the US servers. DAoC had a pretty decent system back in the day, wonder why that hasn't been implemented. Sieging has gone down to a crawl as no one want's to put the effort into a battle siege anymore. Personally I think anyone should have the right to get out there and call a siege rather than buying into one. Just my thoughts.

after 4 years of none stop playing age of conan i log in less and less some times i start the patcher just to press 'x' and quit. I really liked pve in this game and really liked pvp ccombat it still is soooo cool and nowadays balance is so much better than before and sprint system will be great but at this point its not enough for me. I really hope something will change to this game. we dont need any more raids at this point we dont need any more dungeons (though i would really like to see some old world revamp on items) what this game needs really fast is some pvp action!!!

Hey Slith I am pvp lvl 9,07 with my sin and I colected 6600 bori tokens from boxes in minigames only I didnt dig bori at all ;-) so I can buy whole bori set without any bori with sin looting in minis is easy job.

I didn't have foresight and I asumed I will never need/want Bori armor. I have spent my minigame droped tokens on 2 x 10lvl daggers, necklesse and AA pots :X