This week in Hyboria #2

New Minigame
Game Director confirms that new minigame will come out at the same time as adventure pack. Seems like Funcom decided not to bundle the minigame with the add-on  and simply release them at the same time. I think it is wasted opportunity to test whether PvPers will pay for good PVP content. Hell, I would. 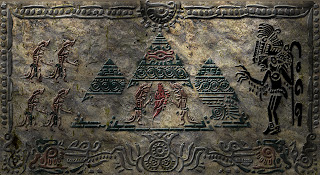 As part of monthly teasers Funcom has released another artwork. I think the fresco portraits Bit-Yakin and his inhuman servants. Therefor the next add-on is based on Jewels of Gwahlur and the location is Keshan.

Longer post from Game Director
It's been a while since I have seen one of those longer forum posts from Silirrion. This time Game Director goes over some rewards in PvP and upcoming 1-server tech that is currently deployed in The Secret World

One server technology
Speaking of 1-server tech you can check out details about that system in TSW blog post. I have already seen praises about this system on Massively.com. I, for one, can't wait to see it in Age of Conan. I don't think anyone is opposed to this system.

Know o Price...
Touchii of EU Age of Conan forums made a great post explaining the lead-in sentence from “The Phoenix on the Sword”. Very nice analysis of classic REH writings.

More on add-on
Game Director confirms that the add-on will be about the size of Turan. That is pretty enigmatic considering that Turan wasn't really big zone-wise, but rather packed with few separate additions (2 solo instances, T3.5 raid and dungeon). I seriously doubt that Age of Conan needs any more raiding content at the moment, but time will tell.

More on crafting
Silirrion did not say "NO" to the idea of PVP crafting. The conversation started with lack of goals in PvP after hitting lvl10. My idea is allowing players to craft armors with same stats as lvl10s, but with different looks. Finally the whole crafting system is a foundation for additions down the line of development. From what I understand the crafting revamp is a lot more comprehensive than one might expect. There are many aspects of the game that are linked to the current, broken system (like Taratia Commons riots or T3 crafting) and all that has to be changed. I am super excited for this content.

More delays
As the community update for the 13 th states the next patch with TOS and stamina revamp might hit live... around the end of August/beginning of September. That is freaking long wait for some mere system changes. Let's hope that soon after this is done we will get the crafting revamp on TL.

Tempest of Set revamp
For those without TL forum access - here are the complete patch notes:

* The Sprint revamp has been re-enabled in this version *
Additional sprint changes will come in future testlive updates.

Reduced cast time and tweaked damage of Lightning Strike. The cast time is now 2 seconds, the DPS of this spell will be the same.
Charged Blast now innately does splash damage on up to 2 additional targets.
Storm Nimbus has been redesigned to increases the armor and spell penetration of all team members.
Cobra Stare and Constriction now innately have the health break percentage as the former Empowered Cobra Stare feat upgrade granted.
Degradation of Set no longer affects Storm Field.
Changed the gain level of some spells to improve the gameplay experience of low level priests.
Clarified several feat and spell descriptions.

Redesigned the Storm Crown feat line. The second and third rank of Storm Crown now also increase the amount of targets hit. Storm Throne was reduced to two point feat, increasing the damage and targets of Storm Crown in addition to adding Elemental Torments on targets (50/100 %). Storm Regalia was reduced to a single feat point, increasing the electrical damage done by all team members and granting their weapon attacks a chance of restoring the team's mana.
New feat in the Thunder tree: ‘Serpent’s Twist’. Increases the tempest’s chance to resist most Snare effects.
‘Improved Cobra Stare’ has been replaced with the new 3-point feat 'Set's Entrapment'. Increases the duration of the tempest’s Cobra Stare (+Constriction) and Quicksand spells.
New feat in the Thunder tree: Piercing Storm Crown. Increases the critical chance and critical damage of Storm Crown.
'Static Blood' has been replaced with the new 5-point feat 'Energized Soul'. Grants all allies affected by Vitalizing Jolt a retributive damage buff.
Tweaked the duration and reuse of time of Idol of Set to make it more mobile.
‘Set's Life Spark’ is now a permanent buff that persists until used.
Improved Call Lightning was moved to level 40 in the Thunder tree.
The Storm Blood Feat was moved to level 40 in the Thunder tree.
Triumphant Life of Set was move the Aura of Nebthu line (level 50) and changed to a spell which allows the tempest to chose whether or not Life of Set inflicts AoE damage.
The base health gain of Vital Shock was increased by 50%.
Staggering Voice has been redesigned from a root to a 6 second snare.
New feat in the Thunder tree: Vitality of Set: Increases the critical chance of Vital Shock and the healing power of Vitalizing Jolt.
New feat in the Thunder tree: ‘Improved Thunderhead’: increases the base spell damage bonus granted through the Thunder buff.
Reduced the cast time of Summon Aura of Nebthu to 1,5 seconds (down from 2,5 seconds)
Divide and Conquer, Shock and Awe and Prison of Souls have been removed and replaced with other new feats.

‘Arcing Charged Blast’ now increases the splash damage and crit chance of Charged Blast.
Grounding Charge has been replaced with the new feat 'Set's Empowerment': Increases the tempest's Constitution and Hit Rating.
Rousing Shock was turned back into a spell that in addition to removing all Stun effects from the group provide a short period of Stun immunity.
Lightning Sparks was moved to the Lightning tree. Lightning Sparks will now increase in damage as it is channeled. Additional feats in Lightning Sparks will now also increase the damage of the spell, and the Spark Storm effect can now in addition be applied by the Charged Blast spell.
Added Call Lightning to spells affecting Faithful of Set.
‘Brutal Lightning’ and ‘Fury of the Storm’ in the Lightning Tree now also upgrade the crit chance and critical damage bonus of Lightning Sparks.
Reduced the feat points for ‘Ether Absorption’ to 3 (down from 5) to balance mana income.
New feat in the Lightning Tree: Spell - Force of Lightning: Grants a spell that enables the tempest to energize a friendly target, improving the Armor and Spell penetration of the target's next attacks. Allies near the target also receive a lesser penetration bonus. This feat replaces 'The Building Storm'.
The cast time on Column Lightning has been reduced to 2.5 seconds.
Lightning Arc feats now also grant a 33/66/100% chance of gaining the Spark Storm effect when casting Charged Blast on a target that has Arc Lightning running. This can however only be applied every 8 seconds.
Titanic Storm will now only increase the amount of targets hit (as the description already stated).
New Lightning tree feat: ‘Jurisdiction of Set’ Augments the Charged Blast and Lightning Strike spells by increasing the range and the damage they inflict.
New Lightning tree feat: ‘Lightning Storm Nimbus’. Improves the Storm Nimbus spell by increasing the magnitude of the team's critical hits (critical damage rating), in addition to increasing the armor and spell penetration effect.
The ‘Brain Spasms’ spell has been improved, it will now grant a sprint reduction in addition to a spell damage increase for 15 seconds when recovering from a stun, silence or fear effect. The cooldown was also reduced by 30 seconds (now 2 min 30 sec).
New Lightning tree feat: ‘Spell - Shroud of Serpent Scales’. The tempest summons a shroud of armored serpent scales. This grants the priest a strong defense against physical attacks for a short period of time.
Cyclone of Set is now a standalone 1-point end feat in the Lightning tree. Grants a spell that enables the tempest to summon an elemental cyclone that continually inflicts electrical damage to nearby enemies in addition to slowing down their movement.

The Idol of Dark Rejuvenation totem now has a unique color.
Clarified the description of Leviathan's Call. Each melee attack against affected enemies has a chance to refresh the duration of all active Elemental, Physical and Spiritual ruins.
Forked Lightning now also grants a decrease in the casting time of Lightning Strike.

Reduced the mana cost of the Rebuke spell.

Replaced the Ether Flow feat with the new feat 'Rejuvenating Spirit'. Increases the power of the priest's Emanation of Life, Renewal and Healing Lotus spells.
The General tree feat 'Healing Spirit' has been made into a 5-pointer and redesigned to now increase the power of the priest's self-heal component of the Wave of Life, Blood Flow and Life of Set spells.
The General tree feat ‘All-Encompassing Spirit’ has been de-linked from the feat ‘Guiding Spirit’. Also clarified the feat descriptions for these.
‘Shroud of the Gods’ was moved on step up in the tree.
New General tree endfeat: ‘Spirit of Vitality’. Augments the Divine Vigor, Mark of Set and Spirit of the Bear spells by increasing the amount of life the priest’s team gain.

The General tree feats 'Focus' and ‘Soothe the Soul’ have been removed.

Age of Conan: Hamlets of Aquilonia
Marry me?

You will get old in waiting for next AoC updates, mini games, adventure packs, PVP crafting, revamps, etc.
It is only bla bla from Funcom!

luckly AOC isn't my life so I can manage it :D

seriously, yes, it is bad, the updates are rare

but it doesn't bother me really,

I am a lot more laid back with my gaming than I used to be.

i log now and then to play some minigames but seems to me that guards are really soooooo op nowdays especially with that crafted t3 polearm. last night there was a guard killing everything and caping 3 times lol.
if you add combo exploits, speed hacks then you can start seeing that this game has fallen so low and FC doent give a fuck about it.

I am bored with pug minigames and there is nothing else to do in aoc. I dont see a reason to be premium. Ganking at bori or broken sieges arent good enough for me. Im playing aoc almost 4 years now. I enjoy Howard's universe but this game has really no depth if your gameplay is pvp.