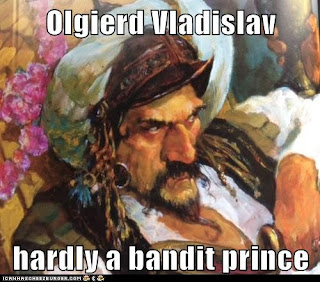 They say once a raider, always a raider (what? I raided Toth once, didn't care for it :P). I am talking of course about Olgierd Vladislav, a mysterious man that you can meet on your journey to the Khitai (far far to the east!). As you know there are two ways of going to Khitai and that is paying hefty price for the passage or hiring yourself as a caravan guard. If you have chosen the latter you will have to beat the random encounters. There are many types of those side quests and they were implemented into the game to portrait that you are in fact taking long and dangerous voyage in order to reach the land of Khitai. On one of those encounters the caravan will be attacked by a band of Zuagirs. After defeating the few waves of those ferocious warriors their leader will appear... Olgerd Vladislav himself!! 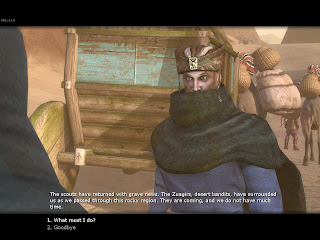 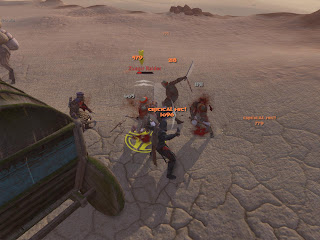 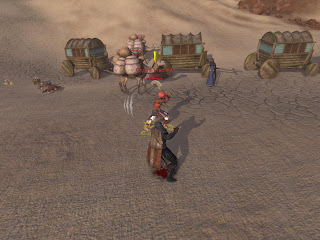 Who is this Olgerd I am speaking of?

"If I could come down from this beam I'd make a dying dog out of you,
you Zaporoskan thief!" he rasped through blackened lips.

"Mitra, the knave knows me!" exclaimed the other. "How, knave, do you
know me?"

"There's only one of your breed in these parts," muttered Conan. "You
are Olgerd Vladislav, the outlaw chief."

"Aye! and once a hetman of the kozaki of the Zaporoskan River, as you
have guessed. Would you like to live?"

"Only a fool would ask that question," panted Conan.

later on Conan joined Olgerd's band as a second in command and fianlly banished him from the camp:

"They took your orders, but they fought for me. There is
not room for two chiefs of the Zuagirs. They know I am the stronger
man. I understand them better than you, and they, me; because I am a
barbarian too."

"And what will they say when you ask them to fight for Khauran?" asked
Olgerd sardonically.

"They'll follow me. I'll promise them a camel-train of gold from the
palace. Khauran will be willing to pay that as a guerdon for getting
rid of Constantius. After that, I'll lead them against the Turanians
as you have planned. They want loot, and they'd as soon fight
Constantius for it as anybody."

In Olgerd's eyes grew a recognition of defeat. In his red dreams of
empire he had missed what was going on about him. Happenings and
events that had seemed meaningless before now flashed into his mind,
with their true significance, bringing a realization that Conan spoke
no idle boast. The giant black-mailed figure before him was the real
chief of the Zuagirs.

"Not if you die!" muttered Olgerd, and his hand flickered toward his
hilt. But quick as the stroke of a great cat, Conan's arm shot across
the table and his fingers locked on Olgerd's forearm. There was a snap
of breaking bones, and for a tense instant the scene held: the men
facing each other as motionless as images, perspiration starting out
on Olgerd's forehead. Conan laughed, never easing his grip on the
broken arm.

"Are you fit to live, Olgerd?"

His smile did not alter as the corded muscles rippled in knotting
ridges along his forearm and his fingers ground into the kozak's
quivering flesh. There was the sound of broken bones grating together
and Olgerd's face turned the color of ashes; blood oozed from his lip
where his teeth sank, but he uttered no sound.

With a laugh Conan released him and drew back, and the kozak swayed,
caught the table edge with his good hand to steady himself.

"I give you life, Olgerd, as you gave it to me," said Conan
tranquilly, "though it was for your own ends that you took me down
from the cross. It was a bitter test you gave me then; you couldn't
have endured it; neither could anyone, but a Western barbarian.

"Take your horse and go. It's tied behind the tent, and food and water
are in the saddlebags. None will see your going, but go quickly.
There's no room for a fallen chief on the desert. If the warriors see
you, maimed and deposed, they'll never let you leave the camp alive."

Olgerd did not reply. Slowly, without a word, he turned and stalked
across the tent, through the flapped opening. Unspeaking he climbed
into the saddle of the great white stallion that stood tethered there
in the shade of a spreading palm tree; and unspeaking, with his broken
arm thrust in the bosom of his khalat, he reined the steed about and
rode eastward into the open desert, out of the life of the people of
the Zuagir" 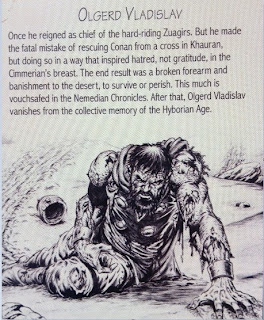 Title: A Witch Shall Be Born
Author: Robert E. Howard

Poor Olgerd Vladislav wasn't really good at this raiding and pillaging game since you can take him down personally in this encounter. Furthermore you can loot his mask and wear it proudly. Is Olgerd Vladislav truly dead? Well, did you check? He might return, he has a nasty habit for doing so...

Images taken from Conan: The Ultimate Guide to the World's Most Savage Barbarian . I highly recomend getting this book!
Posted by Slith at 10:27 AM