This Week in Hyboria #3

PvP items and level cap
We have confirmation that all signs point that yes, there will be craftable pvp items in the new crafting revamp update. However the level cap of 10 won't be rised any time soon (Funcom is pretty firm on that). I can only speculate that crafting materials for pvp items will drop from players in *gasp* PVP! We know that Funcom has a way of making drop happen only in certain area as body parts drop only in Border Kingdom and special social armor drops in HoC. There is a good chance that new pvp items will be equivalent to T3 Bori armor in terms of stats but with new look. It would make sense since there is no vanity option in PvP when it comes to minigames and Kingdoms pvp.

New info on upcoming add-on
Last month's Dev letter hints that the expansion reveal will take place in next couple of days. I fully expect same threatment as Savage Coast of Turan received: video walk through and series of interviews and Q&A sessions. The most important information is that the add-on will be aimed at high level players. I think it was a grand mistake for Funcom to make Turan add-on mainly for lvl50s (I do understand why they did it but that doesn't change the fact that it was a mistake). The current post lvl80 content has been ran to death by players and everyone is starved for long lasting end game experience.

YG.com is for sale
Everyone is still upset about yg.com closing down. It was the very last almost-up-to-date feat planner and as such it is greatly missed by the community. Although in-game build sharing is currently in the works Funcom has no short-term plans for offering any kind of off-line feat planner. But there is hope still: the contents of yg.com are already sold to a third party. Hopefully someone will take all that data and create new service for everyone to use.

Server mergers
The one-server-tech is already in the works and it's being implemented one step at a time. The next milestone is bringing the remaining servers together. Next week we can expect the following  changes:

In other words: ze germans are coming! I, for one, welcome that.

What we be getting is single server for both EU and US playerbases. ...unless Funcom deletes everything and starts fresh which, obiously, ain't gonna happen.

Facebook lol
The official Age of Conan facebook page had this update: "User Thomas Tran shares his view of the outskirts of Old Tarantia. Thanks for sharing!". What our brave men down at Funcom don't know is that in order to take this picture Mr.Tran had to "abuse" the geometry and world design in order to get to that place in which he shouldn't be. I am an explorer myself so I am not condemning Thomas, but I do find it super ironic that Funcom re-posts this picture after spending last 4 years patching up different places in Hyboria in order to PREVENT players from exploring them. 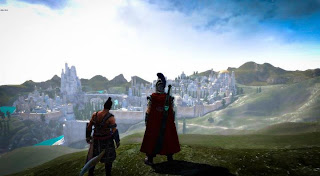 Links
As always here are few links that you might find useful:

Third Time Lucky is a niche wiki for Age of Conan
http://thirdtimelucky.pbworks.com/w/page/22202050/FrontPage

Want to advertise (spam the global) about your guild? Here is a still working code generator that will make it a breeze
http://www.cabs.dk/aoc/scripts.php