Guilds in Age of Conan 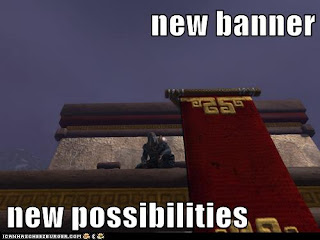 Recently I have changed the guild. The reasons for that are in this post, but it made me think of a guilds as a part of a game and how important they are to the overall experience. I have also thought about my previous experiences the guilds in Age of Conan.Turns out I am not a guild hopper and whichever guild I have chosen in the past ...I have stuck with it to the bitter end. Once again I am stepping into the muddy waters of AOC's guilds and this time around sweet end will be prefered. Lets go over my past guilds: 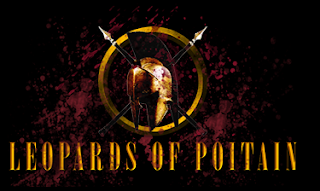 Leopards of Potain was a very small, niche guild of hardcore RPers. The guild was founded in may of 2008 and lasted couple of months. It was unique social experience since we were trying to stay in character also in guild chat (it worked ok but not great). This blend of new game feeling and all the wonders of Hyboria have created a mixture that was blowing our minds. There was only one time in AOC's history for such guilds to exists and I am very happy that I had my part in that. I remember our meetings in Old Tarantia and all the bad RP we were trying to pull. Definitely I will always go back to that period with a nostalgia in my heart. To this day I still think of my character as born and raised in Potain "the land of warmth and plenty, of beautiful men and ferocious warriors" (that "beautiful men" part makes me uncomfortable but still Potain is my home). The guild disbanded when some stopped playing and some started looking for more end game experiences. Simply put we have grown out of this niche thing. It was good while it lasted.


The Imperium!
Imperium was the first serious guild that I have been a part of. It was very well organized and quickly gained dominance over the Aquilonia server. I really cannot recall whole lot about them other that it was good. This guild also had the most misterious ending: one day the leader announced that they are moving to...USA PVE SERVER?? And they were gone like that *snap*. Since I have been left alone it was time to move on to...

Sanguis Attexo
Another big and powerful guild of Aquilonia server. Matter of fact I am pretty sure that the power was it's undoing. The guild progressed so fast in it's raiding and dominated Keshatta so much (yes, back the Keshatta WAS the PVP content) that everyone wanted to be a part of it. As a result the guild became so large that it literally imploded on it's own mass and it's members became detached from the guild. I remember logging on and not knowing ANYONE even thou being member for several months at that time. Hungry for more PVP experience I have became....

That was the weirdest period in my AOC history. SCUM was an unique guild. I think I have joined the SCUM at the time when things were much more civil that they used to, but still it was very different from whatever Aquilonia could have offered at the time. The point of the guild was simple: if its red the kill it dead. It meant  killing everyone on your path, every time. I remember passing some guy questing in Tarantia Commons, minding my own business when it occurred to me "..oh wait, I forgot to KILL YOU!" So I ran back and butchered him in one of the nameless allies that Commons are full of. I have never killed someone that was fighting mobs or taking a quest, but apart from that it was pretty straightforward. But SCUM was a niche project and this time the small numbers proved to be it's undoing. Hardly anyone wanted to be part of server's biggest assholes and the SCUM quickly lost their raiding capabilities along with any chances to siege. The one day simply one of the old leaders showed up and told us that he was displeased with what SCUM has become and he booted like 3/4 of the guild. For few days we, formerly known as SCUM, tried to unite under new banner and we have failed to even come up with a decent guild name. 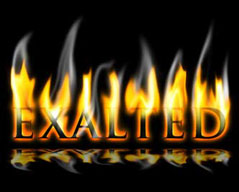 I have been with Exalted for over two years which I the longest I have ever been with one guild. They had it all: very nice community, city, raids, sieges. Definitely before the merge with Fury the Exalted were unmatched on Aquilonia. The merge threw us into the hell hole known as Fury and for many of our members it was quite the shock. The Aquilonia was a pvp server but it had style and the Fury was something more raw, tasteless and unappealing. Many of us have left the game and that point but the rest were slowly adapting. My biggest mistake in Exalted was never truly taking advantage of what guild had to offer. When there were still groups sign ups for minigames I were playing these with people from the guild, but when the premades were removed I have become isolated from the guild. I wasn't raiding, I wasn't doing much PVE so there was very little chance for me to socialize with people. In my mind I thought that I had time for all other activities, that was I was seeing in terms of Exalted's success with raiding and other things would last forever. All I had to do was "ding" pvp lvl 10 and I was free to enjoy the game with the rest of the guild. Of course all that it did not last forever. Over last few months the core of the guild have moved to other mmos and Exalted have became multi gaming community. Once again have was left in an empty husk rather than a guild. The history have repeated itself. Seeing how the core member have invested themselves in SWTOR, SW and how they are looking forward to Guild Wars 2 I have no doubts that the Exalted is done...in Age of Conan.

Once again I have moved to another major guild with a nice community. The years have stepped me in wisdom and this time I will try to be more in touch with my guild Clan of The Free City.