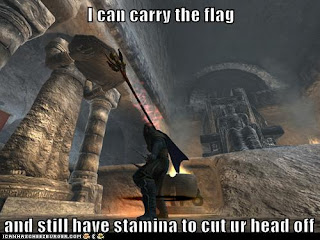 I gotta say it: when the Age of Conan came out in 2008 it was, system wise, in a very poor state. Whoever made those design choices was either extremely lazy or shortsighted. Most likely both.

Since 1.5 Age of Conan's team had to struggle to get the systems in checks: item stats, tokens, veteran rewards - the works. It really saddens me to think how many development cycles were dedicated to rebuilding systems rather that providing raw content. However I have to admit that focusing on systems is a necessary evil. Sure, whenever I hear about next idea for system changes there is always my initial response: "nnnnooooooooooo, its fine the way it is!". Prime example? Resurrection system in minigames: used to hate the very idea of a change, now I am wondering how
we were ever playing without it. The stamina problem was evident since day one and it was one of my biggest annoyances in PvP. Hell, even my recently rolled "alt" Comgall (the barbarian) had huge stamina issues while cutting the vanirs to pieces in Conarch Valley. The change was needed and needed badly. Enter the energy revamp! You can read the official explanation of this system so I won't go over it again, all I want to say is that it just works.

Sprinting
When it comes to sprinting  assassin players (I don't know about other classes) will notice they can sprint longer. Not only the system makes you feel so, but also I could very much compare the changes during my solo questing. I know exactly in which parts of solo instance I would run out of stamina and with energy changes not only that I was able to run longer but when it was time to stop I was battle ready with full stamina for my combos. In PvP I haven't noticed any changes other than not having to worry about those annoying drains which before the patch could left me unable to sprint or even defend myself (not enough stamina to do combos). The casters still can be on the move and kite you, but if you die it will be due to GOOD KITING rather than you being out of stamina and unable to do anything. You can sprint even longer by managing rest and dash properly.
Flag carring
Obviously the energy change has it's impact on the flag carrying: quite simply it is no longer a chore. Sure, you will still be slow with the flag, but you can be very mobile (especially with accelerated) and fully engaged with the combat at the same time. Non tank flag carrier is no longer a sitting duck.

More changes
Funcom removed some skills from the skill tab (like endurance and bandaging) and plans to remove this "skill" system completely in the near future. Honestly I have always found it very confusing: no one knows exactly how some of the skills work and it feels very dated overall. I will be happy to see it gone completely.

The new rest ability is now what it should have been since day 1: super fast, super responsive and the healing/energy regeneration is rapid. Yes, the rest ability can return to your bar. But wait, there is more!! Developers decided to reduce the amount of time people are flagged as "in combat". In other words: you will go out of combat muuuuuuuuuch faster than before and it doesn't matter that your team is still actively fighting. What does that mean? Well, I got two words for you: rest and hide.

The new rest ability will come very handy in minigames without healer since it does it's job very well. I remember hating running away from the fights with like 700 HP left when the team did not have a healer because it would have taken forever to restore myself to full HP again. Those days are gone. As for hide then I don't think I need to explain much: use it and use it often! Remember that assassins have a special ability when attacking out of stealth which is 1 x face stab damage. Not only that face stab benefits from all of the upgrades (like +damage or +crit) but also doesn't make face stab ability go on cool down. Here is how you attack out of stealth:

That is massive damage and you can further increase it by using Lotus Overdose/Avatar/Liberation because none of those will break stealth upon usage. Today I have actually got out-of-stealth fatality in PvP which is just wicked cool (assassin cuts throat from behind with both daggers at same time).

To sum it up: great changes and the game will benefit from it for the years to come.
Posted by Slith at 12:20 PM

Solid post. I just posted some in game issues though. Take a look at it, see if the EU servers are having the same problems. I posted these issues as known on the US forums as well. Hoping to see FC get on it fast with some hotfixes. I do love the sprint now. My guildees are hard at work tweaking the ToS revamp trees as well while avoiding going into the general tree. So far, pretty good progress with an 1800 average dps. Hope it continues.

Nice change indeed! i love it!

Regarding your pic in post.
Seems you fought against noob group if you have time to take pic with flag :), or your team is very well :)

Please go ahead with your blog it is very good and useful!

Update is great! (ofc beside lag :D) I really enjoy pvp much more than before!

love the new stamina system and the possibility of hiding faster after combat... sadly as with every new patch LAG.