Assassin armors in Age of Conan - the good, the bad and the ugly 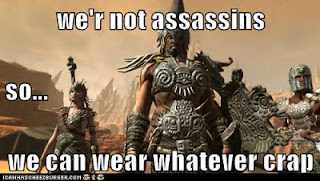 I have to say that I have mixed feelings about assassin armor design in Age of Conan. If I had to point to a good design in other classes I would say.....Barbarians. That is some good, class fitting armors from old world, pvp lvl 10 to T4 raiding. Assassin lacks certain class identity and for a good reason: it is actually a class made from two other scraped concept classes being called the lotusist and the defiler. But that is an ancient history now and we are stuck with what we have: an inexplicably complex character that can't really make up his mind whether he is lotus enhanced ninja or unholy something something with bullshit dark powers coming from souls shards. Well enough about that, lets talk a bit about armor design and what it should be (TM). Shall we set something straight? Assassins are NOT ninjas. Not only historically the role of ninjas was espionage, sabotage, infiltration, but also it is so strictly Japanese concept as a whole that it simply doesn't translate too well into Hyborian scenery. So I am really against deliberately creating ninja-a-like armors with face covers, just for the sake it of. More so I will be the first one to say that I bloody miss a GOOD HOOD in Age of Conan! Just slapping something on assassin's face (a VERY overused theme) doesn't make his garments "assassiny". There is a certain mystique that is attributed to a hoods and I think fans of both Thief and Assassin's Creed series would agree with me on that one.

Looking back at the assassin armors I think we have to start with tier 0.5:

OK, this is probably not really looking all that menacing on a female and it is suffering from the fatal flaw called "being made pre 2008". When comparing this to the rich and detailed PvP T3 or T3 armor the Mindnight looks like it was made for Everquest or other prehistoric mmo as it lacks both the attention to the details and the finishing touches (the hood is not connected to the armor, pants are not connected with the boots etc.). Sadly this style of armor was never again recreated and the concept of assassin armor shifted heavily towards "ninja" looks. In recent crafting podcast game director mentioned that FC have updated the looks of the old armors so perhaps the Midnight set will make it triumphant return at some point. I still have this complete armor in my bank and I am putting it on  from time to time just to do the*sigh* at it's outdated, low res textures and crappy finish.. 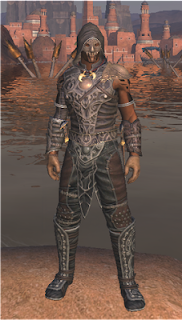 Might as well put all 3 of those here since they are one model with few different details.  I think this not only one of the best assassin armor, but also one of the best armors in the whole Age of Conan. Perhaps it would have been even better without the face mask, but it also adds a lot to the set as a whole so probably it's for the best to have it there. The problem is that this heavily stylized look makes it almost impossible to have any matching daggers that are not the original T3 metallic ones. If I had to find any flaw it would be the over usage of nails which remind me of Gothic style or bondage. Other than that this is a prime example why people have fallen in love with AOC and assassin class in particular.

Bossonian and Dark Fate armors are the example of how pretty much same armor can look awesomely better with a hood or classic ninja mask. Their is certain realism to those armors (sadly lost in later designs) which I find fitting. The Bossonian set looks like it would be something someone would actually wear while stalking those damn Picts beyond the Thunder river .

I am really torn on this issue. PvP lvl5 "nipple set" stood the test of time in my opinion as it still looks pretty decent, even when it's visual features are compared to top tier pvp armors. I know that I have said many nasty things about *ekhm* nipple set in the past, but it is one of the few assassin armor that look like someone might actually wear something like that. Compared to pvp lvl5 both lvl8 and lvl10 armors are over-stylized and sadly  - not really fitting the Hyborian setting. Especially pvp lvl 10 armor, while it's details are indeed impressive, looks like it was made for a different game than Age of Conan. It is simply not clear to me how some craftsman in Hyboria would even make such clothes as pvp lvl 10 armor since their look is so advanced and complex. PvP lvl 8 armor had some potential, but that "thing" you are wearing on your head is supposed to be, believe it or not, a hood which it is totally not.

Even thou Khitai had it's very unique look (which only makes sense in the context of this weird land) there is a certain charm to those sets. The Brittle Blade armor looks clunky and heavy, but it simply cannot be mistaken for anything else. At the same time Shadows of Jade set has that raw and rugged look which makes it almost realistic. Definitely I would like to see more SOJ-alike armors in the future.


The House of Crom and the rest
The release of HOC is where assassin armors went sideways BIG TIME. First on the chopping block: the Lunacy set.

This armor is so crap that I haven't seen a single person wearing it. In this picture my assassin is missing a chest but trust me that pice of armor adds nothing to except bunch of feathers. I am of the impression than a well know comic book character by Gościnny & Uderzo (who is also blond like Slith) might or might not have been something of an inspiration for this set...at least for the head wear. Lunacy, compared to the awesomeness the soldier classes got out of HOC, is simply insulting. Since HOC assassin's head pieces got weirder and weirder.

Turan armor is a prime example how head wear can mess up otherwise good looking armor.But Turan add-on was all about wierd hats.. 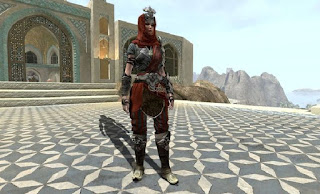 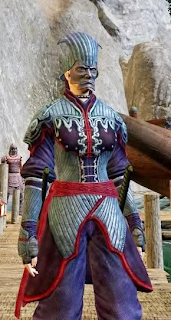 The biggest slap on the face for assassin players since...well since ever. Those unimpressive looking garments are topped of with a head wear that one might only consider putting on for Halloween party (and still be regarded as "freak"). I don't know what the FC artist based this armor on and quite frankly - I do not care. This is overly simplistic, unattractive and clunky looking...best armor in the game. Nice. Comparing T4 to T3 is like comparing asian style MMO to, well Age of Conan I guess. It is unbelievable that such great, original design of  T1-3 got, after all this years, perverted into a joke that is T4. Bad bad move. 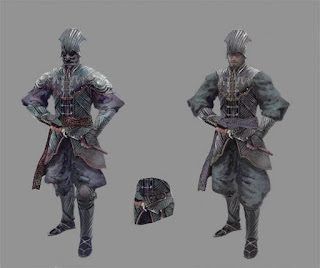 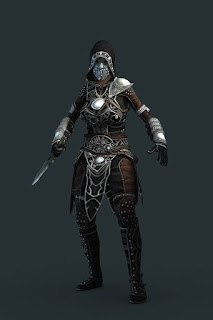 What is on the horizon..


I will be honest: I am not a big fan of the theme set for latest add-on, as my dream add-on is a big city, or something related to Aquilonia. I guess "you gotta push with the cock you got". 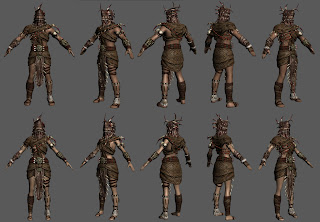 All the signs (mainly: the pieces bought from NPC in SDS and the ones dropped in Wyrm dungeon) are pointing to the conclusion that this is the new assassin armor. While all that Stygian and tribal mix doesn't really appeal that much to a western assassin I have to say that face bandanna/mask is pretty neat even if the armor got skulls on it (as pointed out by Scythie on EU forums). The return of vital "assassiny" mask/cover/bandanna is of course welcomed, but it is far from what I wish I was wearing.

Great wrap-up! I -as a vanity freak- have been waiting for this since you first tweeted about it.

I don't know how serious you were while writing "why people have fallen in love with AOC and assassin class in particular." but this is SO accurate! I myself decided to roll a sin after I saw sin's tier 3 armor.

I use Bossonian armor, a great Vanity armor

It seems every single class has a great-looking T1, T2 and -especially- T3 armors, and T4 is complete sh*t for all of them (except for HoX and BS, their T4 armors are kinda cool).

Interestingly, concept arts of T4 armors are not *that* bad;
Although they suck big time in-game.

oh that is simple: because artwork of shit is always better than photo of actual shit :P

besides: HOX and DEMO look great!

I use darkslayer/fury armor. from lvl ~60. ilt like midnight set but sattin black and red. the best looking armor for casual sin :) imo
>>link: http://img811.imageshack.us/img811/5971/aocassassin.jpg

it's cool, but needs some pants :P