Alternate Advancement and other means of progression 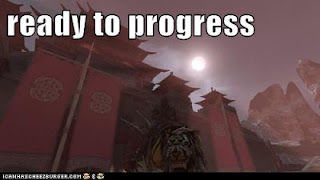 I am very close to finishing up all of my AA....like two perks away. It got me thinking about character progression in AOC and how AA fits that. First of all I want to state that I HATE (with a burning passion) a system that adds new levels with each expansion. Prime example of that is WoW where the level cap now is 90. I have left that game caped at lvl60 :P. In my mind it is bad enough that, once lvl80, 1-79 content is getting trashed (Funcom combats that with recent dungeon revamps). So in that regards AA system is a perfect system for horizontal progression, or a way to expand your character's power. There is an issue with AA system that turned out to be a big disappointment for me: lack of viability.

AA tree has a tons of passive stuff: passive offhand, passive protection, passive resistance to CC. That is to be expected as AA system was meant to prnamently increase character's power. I still do remember my first days in ROGS when I was getting chopped to pieces in Kara Korum and how I simply own that place now. The difference in power is just right: there is a feel of progresion (or "growth") but at the same time old world content is still viable (very easy, but viable) - this isn't like lvl 80 pummeling lvl 60 mobs. However AA system falls short when it comes to perk's viability, which is painfully evident with assassin class. At first I was under impression that AA system is going to be something like Guild Wars deck system where you pick and choose several abilities based on their utility and possible synergies. Here is where AA system sucks ass: there are select few perks that are proper for respectfully pvp or pve and the rest is just a filler because they are either horribly underpowered or plainly too dumb to begin with. Great example of that are pressing strikes and decisive strikes which are bread and butter of pvp builds and no one with a right mind would go for such "amazing" stuff like extra energy regen perk which allows you to sprint for *gasp* 1 second more.
I really wanted AA system to be a way to not only power-up your character, but also to customize your build. Assassin is a very sad class in that regard since both AA and feats are rather straight forward so pretty much everyone runs around with same build and set of perks. I don't think Funcom will ever address this issue as so far they have proven to be very resistant to to making any major AA changes/tweaks (apart from what is forced due to obvious system changes).

But enough of what we have, here is what is coming up:

Few months ago Game Director for Age of Conan told as in the interview that new add-on will introduce another way of horizontal progression. My mind immediately fired up with a single idea: legendary weapons that you can level up (LOTRO has this I think). To my surprise said "new" means of progression are, in fact, set bonuses. What are those? Most likely those will be extra stats that will be granted to your character, but only if he is wearing complete set (like Brittle Blade set). As for now those bonuses will granted exclusively to new sets, but Funcom might consider adding them to older armors too. I don't consider that a character progression per se, because this is only a way to expand items budget. In my mind gear progression and character progression are two separate things. Gear is not a part of character, but merely an extension of it.The second thing that might be considered "progression related" is new crafting system, but as I understand it it will be "leveless" system so pretty much every lvl80 crafter will be able to craft similar or same item - provided he has both component and knowledge to do so. We don't know much about crafting yet but I would love for it to have some means of "leveling" your crafting even if it only was meant to grant you higher chance of critical success (crafting item with better stats than normal). We shall see.

What I would like to see in the future? Defiantly something to customize and progress your character. Simply gathering more power is neither fun nor healthy for the game (creating bigger and bigger gap between newbs and vets). But if AOC firmly stays at lvl80 it will need, sooner or later, address the issue of progression that will not be simply item based. Don't get me wrong: I think it is going to be totally rad to be able to craft best and most unique item in the game, but at the same time one of the biggest pleasure that I am getting out of any MMO is receiving new feats/abilities, trying them out and incorporating in gameplay. But it is entirely possible for Funcom to keep tweaking/revamping the classes to the point where every single feat and perk is viable for certain build. Oh wow, a man can dream, right?

I totally agree since I'd love to have multiple, unrelated and level-independent ways to progress my character by improving his different skills like crafting, riding, swimming, climbing etc. Not by reading books or spending skill points though, I prefer to progress doing the actual stuff (kinda like UO). We'll see indeed.