What makes your character yours? 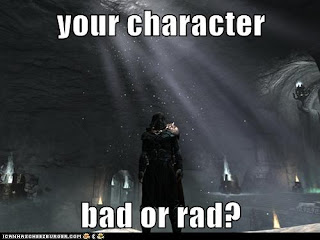 I am constantly amazed with how many different approaches people have when it comes to MMOs and and their characters. Everything from naming to color of the skin is usually well thought out...or not since the player might just not care. I want to talk a little about my personal style and what I have seen so far:

Number of characters: It is very common for MMO player to have several alts. By several I mean 2-4. This number allows people to play different classes, but at the same time to have decently geared toons. On the extreme side there is me: I only have 1 character and 1 only. Regardless what game I am playing I am feeling that every minute of playing counts and should be accumulated towards further progressing your character (AA system that came with Khitai rewards this behavior). If I have 2 characters that means I have to split my time and for some reason I am very uncomfortable with this.There is also a condition called "altisis" which is a state in which player creates alts almost compulsively. I personally know a guy that has 2 accounts so he can store his absurd number of alts. Ever thought about having two guardians: one for raiding and one for pvp? No? Me neither.

Name: I simply cannot play character with poor name. One could argue that "Slith" is not a master pice, but you can hiss it nicely through the teethes and people seem to remember it. On the extreme side people will go with most absurd names "for the heck of it". Usually on the RP servers players will go with name that don't mean anything, but sound "kinda fantasy". Ever met Shadror, Akhen, Melkal, Budhr, Jeale, Zaihe,  or Kaile? I could keep going with those name since I am pulling them straight out of my ass. You come up with first 2 letters to get your going and then fill the rest with random letters. Works like a charm.

Appearances: Players tend to create idealistic versions of typical fantasy hero. Men are tall and muscular beyond belief and women and beautiful and slender. I really like more realistic approach. My characters are never too tall or buffed. I also like too add, if possible, some kind of flaw to the general appearance: with Slith I went for scared face. For some reason my MMO characters have blond hair. On the extreme side I have seen very few "freaking ugly" characters. Age of Conan really allows to create some hideous faces, but very few people dig abusing that. From what I heard back in beta very fat toons were possible to made, but FC changed that (same story is true for WoW).

Sex: Male. A lot of male players create female characters because they want to "stare at something nice when they are playing" (digital butt). Since I am treating my character like a kind of an avatar it would weird me out to be playing as girl. Do girl gamers create male characters so they can stare at them? Somehow I doubt it. Prove me wrong?

Race: First and foremost it is human in all games. Second thing: it is white human. Again it the "avatar" factor kicks in and it weirds me out to be playing as Khitaian or Stygian. The character must "reflect" me in some ways.

For those reasons I am feeling very attached to the character, more than to the game itself. I
f I have lost my toon I doubt I would have continue my journey in Hyrboria.

Nice topice! I must admit that i have similar play style regarding alts. Only difference is that beside my main toon (male), i have 1 female alt (half secret), only for some testings, to have aceess to more proffesions,it is my warehouse, and for some secret trading. You know, sometimes is not good to selling goods with your well know main. Some player will not buying from you :(.
Also i really don't have time for more alts and will be very confused with several toons. So, i love my main toon (ranger) and i can say it is my avatar and i want be him if i wake up one morning in Hyboria. I love this role.
BTW i resubb and enjoy it!

Glad to be hearing that you are enjoying your glorious return to the Hyboria.

It's going to be a good year for Age of Conan!

Good write!
I put in a lot of thought behind my chars on creation. I can't stand a toon that looks wrong. I will be spending a long time with the toon and want it to be right.

Besides that, playing an MMO is the only way a grown man get to play with Barbie dolls :D

Excellent write up Slith. I am very careful when choosing names and having a certain look to a character. I have to feel it and it has to fit the class. I have fired (read deleted)several toons after creation because they just didnt fit.

(for example, Deohgan, one of my cimmerians has a name that means "by the yew tree" or "born at the yew tree"... nerdy, yeps, helps me to bring my character to life yeps :) )

Well I'm gay and I only play male characters in videogames ^^