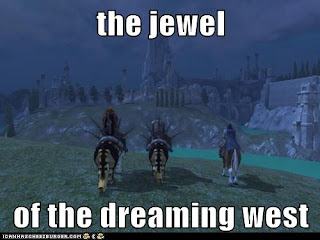 "Know, O Prince, that between the years when the oceans drank Atlantis and the gleaming cities, and the rise of the Sons of Aryas, there was an Age undreamed of, when shining kingdoms lay spread across the world like blue mantles beneath the stars (...) But the proudest kingdom of the world was Aquilonia, reigning supreme in the dreaming west." - The Nemedian Chronicles

If you wanted to explain to someone what the exploration is all about in Age of Conan THIS is the place to show. I have decided to open my own "Cheesy Tours" agency and I have taken two tourists on a wild trip to the hidden city outside the Old Taratnia. We had Morgothday (Demo) and Vehl the Conqueror. It turned out to be vital that Vehl was present because we were constantly abusing his resurrection ability whenever Morgoth had slight issues with making the jump. Yes, you can resurrect someone up the building or even cliff :D. 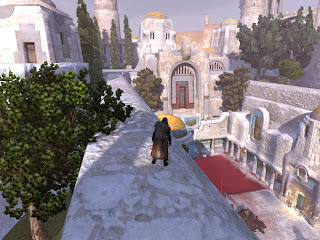 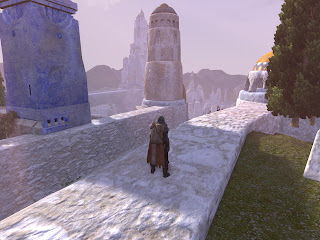 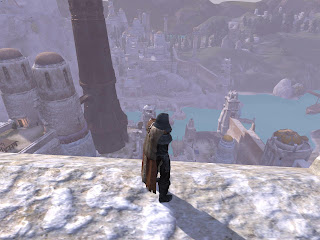 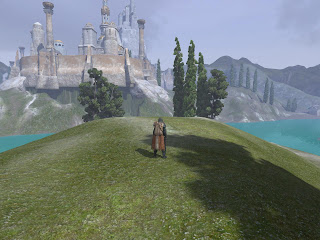 The first part was easy: it was same route that I used in ep.4. Then we have managed to get on the other side of the buildings and finally reached the end of the wall. Here is the tricky part: you have to be absurdly precise to land in just the right spot. If you can make the jump you will survive with 600 HP left, if you miss the stone you are supposed to land on - you get splattered. Needless to say both of my companions were shortly no more than two mangled corpses. Then I have came up with devious idea: I ran to the guild city, bought death charms (1g per pop), climbed back up, made another (luckly) successful jump and resurrected the Conqueror with the charm. Once the Vehl was up Morgothday soon followed. I gotta say that getting to this spot back in 2009 was absurdly easy because all you had to do is jump into the river near the docks in OT, swim up and you could freely explore. Since then Funcom patched up that place TIGHT so I am very humbled that I could see whole map again and even show it to others.
After short ride we have reached the hidden city (old, unused content from 2008). Sadly we got foolishly stuck in geometry soon after so the rest of the screenshots are from my personal collection. 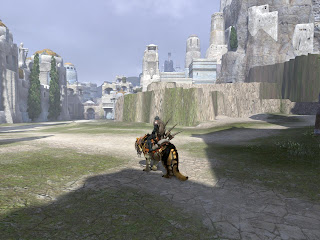 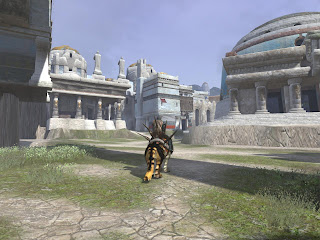 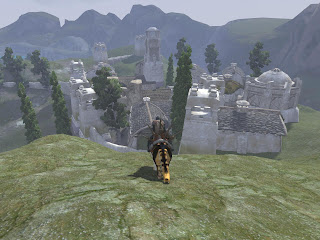 
Very hard to perform due to the jump at the end. A lot of opportunities for mistakes. Great journey to take with your mates.
Posted by Slith at 7:21 AM

I hope FC will do something with these places. I remember a labyrinth in Thunder River, (My last visit was 2, maybe 3 years ago) I was so sure that there is something awesome, waiting for me on the other side but, nope. There are many places like these, enough for another adventure pack imo.

Where did you get your vanity armor btw? You are kinda the coolest looking sin I saw in the game and I can't find them in cash shop.

glad you like the armor. It is actualy my vanity armor put together from different pices:

hood - quest reward from Keshatta instance (Caravan raiders or something?) you can also get this hood from crafter

cape - cape of endless thrist, social reward armor, it was offered during december for free

the rest of the armor - pvp lvl8 assassin minigame set

This was really a journey to go there!!! it was really fun and got a group to go there :D Thnx for the info. I remember back in the old days i have seen an area in stygia (cant remember area) with a pyramid have you seen/been there?