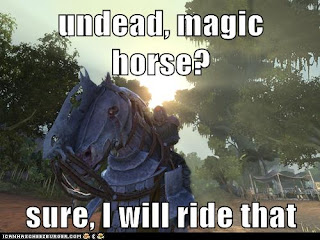 Many people love Hyborian world for it's low fantasy settings. Some think that allowing players to ride tiger or wolf is "tad too much". What is next? Warlock mount World of Warcrat style?

Such creature has no place in Hyboria!

Oh rly? In this post I want to show you that REH had some wicked ideas and "flying mounts" might just not be as "out of context" in Age of Conan as one might think. 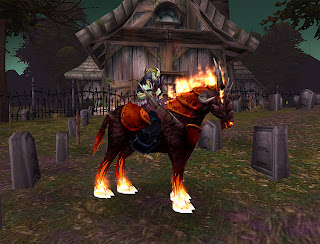 "But Conan saw, looking over their shoulders, and a queer chill sensation crawled along his spine.There was something vaguely unnatural about the apperance of black horses (...) Behind the rumbling chariot the dull roar of battle and pursuit faded in the distance (...) and the chariot moved into the vast blue shadows floating up out of the east. A babble of excited voices rose, drowned by the next instant by the whirling wheels of the chariot on the flags. Sparks flashed froom under the revolving rims as Xaltotun lashed his steeds through the arch. But Conan heard one of the guardsmen mutter: "From beyond the border to Belverus between sunset and dawn! And the horses scarcely sweating! By Mitra, they-,"

- REH, The Hour of The Dragon.

First is the magic chariot of Xaltotun. It is not very clear wheather the chariot could indeed fly (I think it is implied), but nevertheless the horses could apparently travel amazing distance very fast.
Chariot could actualy be very interesting addition to Age of Conan. Minus the flying of couse.

"On a black camel he came, riding like the wind, and an unholy fire played about him, the cloven tracks of the camel glowed in the darkness. When Natohk dismounted before Set's shrine by the oasis of Aphaka, the best swept into the night and vanished. And I have talked to the tribesmen who swore that it suddenly spread gigantic wings and rushed upwards into the clouds, leaving a trail of fire behind it".

Glowing, flying, leaving a trail of fire? I don't think a mount can be more "pimp". Sure, this unholy camel is only described by tribesmen, but considering other feats of magic displayed by Natohk, sumoning glowing camels wasn't the peak of his mystical powers.

"just visible on the distant peak there hung a cloud of peculiar aspect. It was a frosty crimson in color, veined with sparkling gold. This cloud was in motion; it rotated, and as it whirled it contracted. It dwindled to a spinning taper that flashed in the sun. And suddenly it detached itself from the snow-tipped peak, floated out over the void like a gay-hued feather, and became invisible against the cerulean sky. "What could that have been?" asked the girl uneasily, as a shoulder of rock shut the distant mountain from view; the phenomenon had been disturbing, even in its beauty. "The hillmen call it Yimsha's Carpet, whatever that means," answered Conan. "I've seen five hundred of them running as if the devil were at their heels, to hide themselves in caves and crags, because they saw that crimson cloud float up from the peak".

- REH, People of the Black Circle

This is the flying carpet. No, really, Khemsa traveled this way and he wasn't even big shot in the Black Circle.Can you travel more in style than on a cloud of peculiar aspect? I doubt it.

Can you find similiar stuff in Age of Conan? Yes. If your guild reaches renown level 20 you will get a chance to get "Tarpani Stalion". In order to get this mount you have to do pretty nice chain of quests and in the end pay 200 hard ones (aka gold pices). The horse is in fact "undead" and the reasons for it's sorry state are explained in the quest chain. The mount looks dead, probably smells like death too, but that is IT when it comes to magical properties. That hardly measures up to the above mentioned mounts.

Edit: I have been reading Conan: The Songs of the Dead yesterday (digital, iphone version! Oh the times we live in..) spoted the flying camel mount. Enjoy!

Actually, i would like to see some quest where u need specific mount in order to finish quest. For example, mammoth to break enemy's line or something like that!