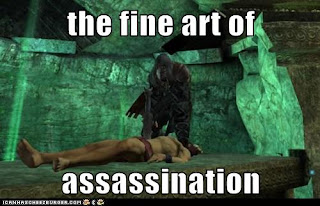 Ever since I have started playing Age of Conan I have been looking for any mention of assassins per se in REH's Conan stories. First of all: this class is not lifted from the book. In reality assassin class was glued together from two other failed classes: the lotusist and the corruptor. This is why assassin class have lotus tree and the bullshit shard system. If Funcom wanted to do this right(TM) the proper name for this class should have been "Thief".Plenty of thievery was going on in Hyboria. Hell, ever heard of Shadizar, city of thieves? Nevertheless the thieves described in REH books are quick to draw blood and their equipment would have suit assassin's well.

"Straining his eyes in the gloom, he saw a hint of motion through the
shrubs near the wall. Thither he glided, gripping his sword. He made
no more noise than a panther stealing through the night, yet the man
he was stalking heard. The Cimmerian had a dim glimpse of a huge bulk
close to the wall felt relief that it was at least human; then the
fellow wheeled quickly with a gasp that sounded like panic, made the
first motion of a forward plunge, hands clutching, then recoiled as
the Cimmerian's blade caught the starlight. For a tense instant
neither spoke, standing ready for anything.
'You are no soldier,' hissed the stranger at last. 'You are a thief
like myself.'
'And who are you?' asked the Cimmerian in a suspicious whisper.
'Taurus of Nemedia.' The Cimmerian lowered his sword. 'I've heard of
you. Men call you a prince of thieves.' A low laugh answered him".

- REH, The Tower of the Elephant
Tauru's appearance might now have implied prowess at anything else than dining, but his methods were as close to the assassination as one can get:

"He knew that this man must be the guard he had heard pass his hiding-place by the
wall. Only a short time had passed, yet in that interval nameless
hands had reached out of the dark and choked out the soldier's life".

- REH, The Tower of the Elephant

When it comes to the equipment Taurus was also, as AOC's assassins do, relaying on usage of lotus:

"Then Taurus brought the
mouth of the tube to his lips and blew powerfully. A long jet of
yellowish powder shot from the other end of the tube and billowed out
instantly in a thick green-yellow cloud that settled over the
shrubbery, blotting out the glaring eyes.
Taurus ran back hastily to the wall. Conan glared without
understanding. The thick cloud hid the shrubbery, and from it no sound
came.
'What is that mist?' the Cimmerian asked uneasily.
'Death!' hissed the Nemedian. 'If a wind springs up and blows it back
upon us, we must flee over the wall. But no, the wind is still, and
now it is dissipating. Wait until it vanishes entirely. To breathe it
is death.'(...)
'They died without a sound!' muttered the Cimmerian. 'Taurus, what was
that powder?'
'It was made from the black lotus, whose blossoms wave in the lost
jungles of Khitai, where only the yellow-skulled priests of Yun dwell.
Those blossoms strike dead any who smell of them.'

- REH, The Tower of the Elephant

Another interesting fellow shows up in a less known story: Black Colossus.

"Shevatas was wiry and lithe, as became a master-thief of Zamora. His
small round head was shaven, his only garment a loincloth of scarlet
silk. Like all his race, he was very dark, his narrow vulturelike
face set off by his keen black eyes. His long, slender and tapering
fingers were quick and nervous as the wings of a moth. (...)
This was Shevatas, a thief among thieves, whose name was spoken with
awe in the dives of the Maul and the dim shadowy recesses beneath the
temples of Bel, and who lived in songs and myths for a thousand years".

Throughout the REH's Conan the author several times have mentioned that Zamorians
are THE THIEVES, so the fact that Taurus has made name for himself should be a feat
on it's own. Shevatas, although we know very little about him, also has proven to be a very capable fighter:

"Shevatas advanced warily on the balls of his feet, knees bent
slightly, ready to spring either way like a flash of light. And he
needed all his co-ordinate speed when the snake arched its neck and
struck, shooting out its full length like a stroke of lightning. For
all his quickness of nerve and eye, Shevatas had died then but for
chance. His well-laid plans of leaping aside and striking down on the
outstretched neck were put at naught by the blinding speed of the
reptile's attack. The thief had but time to extend the sword in front
of him, involuntarily closing his eyes and crying out. Then the sword
was wrenched from his hand and the corridor was filled with a horrible
thrashing and lashing.
Opening his eyes, amazed to find himself still alive, Shevatas saw the
monster heaving and twisting its slimy form in fantastic contortions,
the sword transfixing its giant jaws".

But when it comes to the real deal one story in particular is dedicated solely to the assassination: Rogues in the House. The assassin? Conan himself.

"Would you like to live?" asked Murilo. The barbarian grunted, new
interest glinting in his eyes.
"If I arrange for your escape, will you do a favor for me?" the
aristocrat asked.
The Cimmerian did not speak, but the intentness of his gaze answered
for him.
"I want you to kill a man for me." (...)
Murilo believed the Cimmerian would keep faith with him. Whether the
man would be able to carry out his purpose remained to be seen. Men
had attempted to assassinate the Red Priest before, and they had died
in hideous and nameless ways. But they had been products of the cities
of men, lacking the wolfish instincts of the barbarian".

- REH, Rogues in the House

As a bonus I want to point your attention to the stories that inspired Funcom's
writers to create some of the assassin's feats.

Curse of the lotus - back in patch 1.3 (so 2008) this feat was charming people in pvp
and made them attack each other.

"The fall of the panels released the clouds of doom," said the Red
Priest with a wild laugh. "The dust of the gray lotus, from the Swamps
of the Dead, beyond the land of Khitai."
In the middle of the ceiling hung a cluster of gold buds; these had
opened like the petals of a great carven rose, and from them billowed
a gray mist that swiftly filled the chamber. Instantly the scene
changed from one of hysteria to one of madness and horror. The trapped
men began to stagger; they ran in drunken circles. Froth dripped from
their lips, which twisted as in awful laughter. Raging, they fell upon
one another with daggers and teeth, slashing, tearing, slaying in a
holocaust of madness. Murilo turned sick as he watched and was glad
that he could not hear the screams and howls with which that doomed
chamber must be ringing. Like pictures thrown on a screen, it was
silent".

- REH, Rogues in the House

"I could," he assured her, in evident enjoyment of her distress. He
drew a phial from among his robes. "This contains the juice of the
golden lotus. If your lover drank it, he would be sane again. Yes, I
will be merciful. You have both thwarted and flouted me, not once but
many times; he has constantly opposed my wishes. But I will be
merciful. Come and take the phial from my hand."

So golden lotus heals insanity, but I also strongly believe that it was used in certain wine:

"They are a fast-fading
race, drowned in lotus dreams, stimulating their waking hours by means
of the golden wine which heals wounds, prolongs life, and invigorates
the most sated debauchee".

These people were already cultivating black lotus so it would have made sense for them
to also grow golden lotus. Since in "Shadows of Zamboula" golden lotus has been mentioned as a cure I think it is not far fetched to believe that "golden wine" was in fact "the golden lotus wine" .
Posted by Slith at 11:28 AM