Player housing in Age of Conan - can it work? 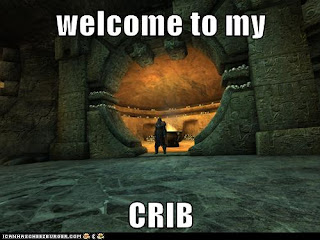 I remember that back in the day when AOC still had RP servers (where the hell are THOSE?) people were often suggesting housing to be implemented into the game. As far as I know FC was considering it as "cool to do someday". Is this a great feature? Can it work? To answer this question I must get my ass into time machine and travel back to about...2002 perhaps? Back then I was enjoying a very interesting mmo called Tibia. Now do not be fooled by the graphics: this game has timeless charm and it's gfx grows on you. In fact Tibia is celebrating its 15-th anniversary and still going strong.

Back then I was playing the game with several friends. I was the only person with "PACC" (premium account) and thus only I could have bought a house. Here is the tricky part: houses are limited commodity in Tibia. There are several cities with houses that you can rent, but it's obvious that only a small portion of overall population will live in a house. You don't own a house, you rent it. In order to rent you have to bid on it on an auction (hosted on a site). So right off the bat: renting a house, as all things exclusive, was cool. Back to my story: I could have only afforded the most basic 1 room "apartment" in a basement. There were many of these rooms around mine, but mine was full of live. I have invited all my friend to go freely inside and out of my house and each have brough a chest to store his stuff. Back then Tibia gameplay was about preparing and hunting. Preparing ment creating magic items that were necessary for you to kill mobs successfully (HMM were magic missile runes, UH were healing runes etc.). Once you have enough of items prepared you could have go out and kill mobs for exp and items. So we were hanging outside of my house for hours chatting, creating runes and bulling lowbies that were passing through. We had two neighbors: one SWE guy (player from Sweden) and some other that was often joining our rune making sessions. I remember how we always hoped that SWE guy would have left his room unlocked. Even thou we couldn't have entered his home we still could throw garbage in and that we did. One time we have thrown so much that it took him over and hour to thow all that crap away. It was a running gag, so much so that I believe he was leaving his home unlocked on purpose so we could have a laugh later on when his home was trashed. I miss those days dearly. This atmosphere of menagerie, frolic and play made my time in Tibia he most fun I have had in any MMO. Of course I am no fool: we all were very young back then, still in school and without care in our heads, we could have played as long as we wanted. Obviously I cannot indulge in same behavior right now in my adulthood. Nor I want to. However there are some lessons to be learned from that experience. What made it work, apart from having friends to hang out with?

1/ Limited commodity - if player housing is to be succesful it has to be something exclusive. Sure, make plenty rooms available in some rat infested basement, but just a few mansions.

2/ Reason to be in/around your house - Tibia was providing a reasons for us to be there. We were creating runes. Sure, RPers will always hang out there to...RP, but what about the rest of population? Player cities are still ghost towns, only filled with NPC. Still there is no reason whatsoever for anyone to BE in guild city. Perhaps new crafting system will address that.

3/ Part of the city - the housing system cannot be some kind of separate instance where only you can see it. You want to know what it is like? Go clear a mansion instance in Tarantia Commons and hang out there. You got fireplace and several rooms, pretty nice, eh? Yeah, I don't think so. I strongly believe that your house should be a part of the living, breathing city like Tarantia or Khemi where you could look out your balcony and see players passing through.

What server did you play on? :o

I would rather concern at pvp arena, sieges - a lot of ppl ask for that, even more pve seems to attract more ppl.
Whats the reason to log in the game and stay in a house while looking at player in tarantia? Uber fun ;P

In such scenario I am struggling to find ANYTHING to write about.;

All ideas are pretty solid, I think I would add that if you did have housing, it could be entered by a stadard group. You would also have a personal bank node there. All of this plus The ability to show off items gained. SWG did that pretty successfully. This made a person's pad customized to them. Much like guild Cities are to an extent customizable.

On some other notes, yep still issues to fix in pvp. This has been largely ingored or designed through the eyes of pve designers rather than pvp designers. And for the love of the Gods I do wish they fixed the Seiges. I was lucky enough to participate in 2 that were a blast till they crashed...then anguish. A ton of good ideas, but no implementation.

Still looking to see what they do with the new crafting system if anything this quarter. If it's as huge as they have touted, I expect a ton of initial issues just like we had when 3.1 first came out. If it is indeed customizable, I could see a whole new economic base develop out of it...pending of success of course.

Content for PVE'rs is decent and prolly just within the means of money invested.

COntent for PvPers...non existant. If they started doing RvR as DAoC had back in the day...might be interesting.