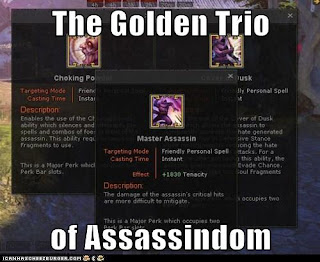 There are 3 corner stones to assassindom: choking powder, cover of the dusk and master assassins. What say you? There is no such a word like "assassindom"? Urban dictionary thinks that too, but I say that you NEED all of those 3 perks to truly unlock the potential of assassin class. Perhaps then you will get the whole meaning behind "assassindom".

In this guide I will go over those perks and, based on my experience, give you few hints on their application in solo PVE, group PVE and PVP.

Before we go any further I want to make one thing clear: my criteria for perks are "what does it do" and "how well does it do it". There are other perks that will perform extremely good in their own niche (for example castration does wonders for you shard management), but I am looking for perks that are so universally applicable that become the very core of you assassin. You see, each time when I have had perks like the Sins of Flesh or Castration it felt like having extra finger: it was great when I needed to....you know what, this analogy is going nowhere so I am cutting it short: those combos are poor replacement for what you already have (Swift Strikes) and what you have doesn't really needs replacing. The other crap is so underpowered it is not worth even mentioning here.

Choking powder - a lot has changed since my last guide. Choking powder is no longer instant, the silence is extremely short and what is left is interrupt.

Solo PVE - I have found choking powder to be irreplaceable for solo PVE. There are many mobs that are, in fact, casting spells and abilities (Yun, Children, Scholars, Scarlets are all casters). You can DPS your target right till the end of his casting and then deny the mob the damage he could have done to you. It also have nice cone damage so you can affect several mobs at once. With this perk I am able to slaughter the mages in the Refuge of Apostate and even pull whole room of them (the one after maze). This also works wonders on solo bosses. The big ape and spider bosses in the Isle of Iron Statues can be interrupted with CP and, considering the ape hits hard like a truck, you will be glad to be having this perk with you. Besides, I am finding the mobs to be already dieing fast enough and I need that little extra something to keep my character alive when going toe-to-toe with the more hard hitting ones. This is my solo PVE perk of choice.

Group PVE - not many applications here. Sure, it is nice to interrupt instance/raid mobs here and there, but the bosses are resisting choking powder thus making it useless in group PVE scenario

PVP - I have been using choking powder in PVP for a very very long time. Hell, I haven't seen another assassin with choking powder as I recall it. The problem is that this perk is extremely situational. Interrupting DT/Barbarian stun feels great, but I can remember games when I hardly used the CP for either lack of spare shards or lack of good moments to drop it in. If I didn't have master assassin then I would have been still using CP in group PVP and I would think twice whether to bring it to a duel or not.

Cover of the dusk - hands down the coolest perk there is when it comes to visual effect. It turns your character's body into black shade and there is also neat, pulsating dark aura. Not only this perk lowers your own aggro output, but also helps your tanks to keep it. 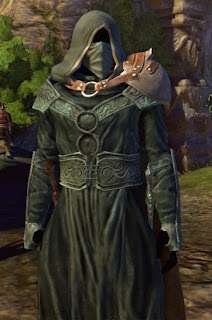 Solo PVE - this perk gives mere 7,5% evade chance (apart from aggro management) which is way to little to be viable in any solo encounters. Perhaps if it was around 30% I would consider it as a CP replacement.

Group PVE - amazing addition that will take any assassin from "DPS monkey" to a silent professional that keeps aggro where it belongs: with tank. This perk can be used in 3 ways. Preventive aspect of COD is using it before you hit the target with your biggest guns. Reactive aspect is helpful when you get aggro and you want to shake it off. If you have cat's paw + expanded sidestep then even without considering your gear's stats you are looking at around 60% evade which might just be enough to save your hide one more time. The last usage is activating COD when someone else catches too much aggro: you won't be able to lower it, but with COD's aura your tank will generate much more aggro than he would have been normaly able to.This is my group PVE perk of choice. 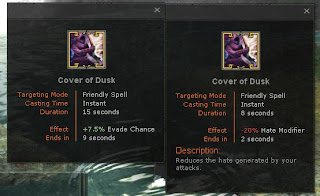 Master Assassin - took me a while to finally recognize the power of this beast. You see Rise of the Godslayer brought in Khitai gear and PVP +5 gear. Those have 1 thing in common: critigation stat. Critigation = mitigation of critical hits. This stat is absolutely vital for PVE progression in Khitai and it makes ocean of difference in PVP. To combat this stat "tenacity" has been added as well. Tenacity stat gives percentage of added damage from your critical hits that cannot be mitigated by your opponent's Critigation Amount. With my minigame PVP set and Master Assassin perk I have 105% Tenacity making my critical hits always sink in, rather than be soaked up.The perk itself gives 50% tenacity so you gotta get the rest from your gear, but it is well worth it.

Solo PVE - I have read people's posts swearing that its "helpful" in solo PVE, but as far as I know mobs don't have critigation. Therefor tenacity doesn't affect the mobs in any way. Period.Proof? Only PVP gear has tenacity stat.

Group PVE - I have read people's posts swearing that its "helpful" in solo PVE, but as far as I know mobs don't have critigation. Therefor tenacity doesn't affect the mobs in any way. Period.  Proof? Only PVP gear has tenacity stat.


PVP - Master Assassin (that is freaking cool name too) is passive so it is always there for you, in the background, working it's magic. I can really tell the difference when I am fighting anything above Barbarian, but even cloth users can be softened up. My character, for example, has almost 33% critigation amount and if you take that away what is left is just fancy "paper" armor with 14% mitigation.
This is my PVP perk of choice.
Posted by Slith at 2:46 PM

Wow - what is the hooded armor set you are wearing in the picture?

And I am a huge fan of CoD in raids and groups - my DPS is always higher, since I can unload without as much fear of pulling aggro. And the aggro shift seems to help weaker tanks in some instances as well.

glad you like the armor. It is actualy my vanity armor put together from different pices:

hood - quest reward from Keshatta instance (Caravan raiders or something?) you can also get this hood from crafter

the rest of the armor - pvp lvl8 assassin minigame set

Question, If u look at ur critigation stats. u have 5% chance that u will mitigate 33% of the critical hit.

U can ofc use the perk that gives u very high critigation chance but i dont think that many ppl use it..
seems most ppl use the two crit/critdmg perks. Yes im aware of the passive % it also gives but thats not so high without actually using the perk?

Then im wondering, is the master assassin perk any good if most ppl have only 5 - 25% chance of mitigating the crits anyways.

Thnx for all ur great posts! I really enjoy them!