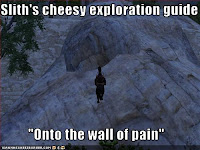 I have finally "unlocked" Tarantia Noble district "explorer's heaven".
The idea came to me when I was leaving the villas to return quests (bored like a ....fox?). It was like a sudden flash: in my mind I saw the jumps and the patch was clear :D 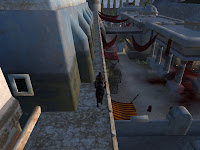 First and most important "unlock" was getting on top of District's shops. Luckly those are connected by small bridge. I have jumped on top of one of the domes and from that straight onto the wall. 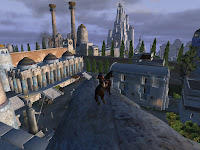 Getting here was fun, but if you turn around you will see that on top of the mountain behind me there is a small temple and it was my prize for the taking. 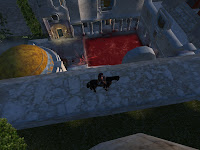 You can spit of fat necromancer from here or take a stylish dive into the pool of blood. 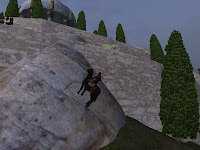 Now for my main goal: the temple (more of a shrine really). My first idea was this rock and I have failed miserably. Wasted like an hour on this. 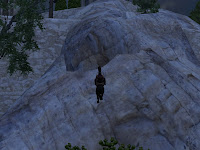 My second idea was even more crazy (considering how close I was to getting to the temple from the rock shown above). 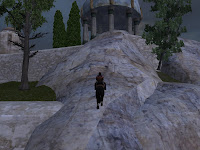 After A LOT of trial and error, careful moves, baby steps and acrobatic jumps I have finally beaten it. 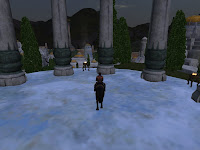 Um...yeah, I guess this is it. Not a jaw droping sight, but it gave me satysfaction only true explorer can understand :D 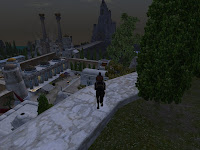 Hardest stuff I have came across to this day. Getting up the temple was very hard for two reasons: one being figuring out which rock/wall was the right patch and second was actually beating the wall.

The temple itself unlocks ocean of exploration opportunities. I highly recomend this place.
Posted by Slith at 6:50 AM

Haha, awesome! I've been doing a lot of AoC parkour myself ~ one of the few fun things to do while waiting around for our revamp. I've been trying to crack the OT tradepost, but it's proving difficult >:( I have a mate who gets into the rough version of Nobles District from Tarantia Commons. I'll try and find some screenshots.

AoC parkour is turning into quite the thing. They should really use this unintended gameplay and try to make secret places like this, only ones that you don't have to glitch onto using a mount.

Fixing the jumping animation (when viewed by others) would only make this all the more cooler :)