It boils down to this 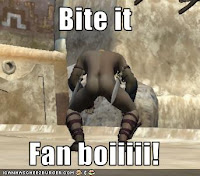 For last couple of weeks (let call them "1.5 weeks") I have been extremely frustrated with Age of Conan. That would be the main reason why there were no new posts: I have had nothing postive to say so why bother my 11 readorz with same stuff?

Luckly I have stumbled upon this little twitt:

Kamukoira@Silirrion This pretty much summarizes the current problems of Aoc, Im certain majority of the pvp players will agree http://snurl.com/rm548

The link will take you to a thread started by guy named Whorrors (who got flammed the fuck out) where he basically nailed down most pressing issues. For sake of "safe keeping" I am reposting some of his wall of text:

Let's take a moment here and think about this, A ToS can run in to a group, drop a totem, click storm crown and stand there literally and melt every person around them while not even moving once and clicking 2 abilities. A demo can stand in the background of any door way, creavus, hill top, pillar lurking spot and just milk people over and over by not moving once. If a person goes near them they have 6 RANGED cc's to work with while also dealing this dmg out. 2 Roots, 2 stuns, 2 types of knock backs, then when you get close to the demo, they click planar shift or hands of the underworld and take off like a ninja at 30% speed increase.... So where is this speed increase for the agile sins or the Rangers? I am confused here. Then aside from that the demo can spellweave which gives them insane crits that are just beyond a slap in the face to anybody who plays this game for it's hardcore skilled combat Funcom promised us and completely took away.

Then we get to the necro, pet's that the necro hides in, if you have an all melee team in a mini game, he pulls out his poop bombs, stands inside of them.. if you even go near this necro and swing more then once, your whle team is dead in 2 seconds, literally. Funcom, I can tell you guys really thought this game through, you guys are absolutely brilliant in making balanced "group play classes". Let's do the math here, if a class is dominant in 1 v 1's.. what do you think it's going to be like in groups? Only an idiot would balance a game on group play and not 1 v 1's. As it stands right now, the caster classes are preparing me to unsub, it's just out right stupid.. They have higher HP pools then the avg melee class along with group buffs that are just beyond retarded compared to melee. Where is the barb/sin/ranger group buffs that we don't hve to spec in to to give us insane absorb effects? or maybe stealth in the middle of combat and take no dmg when stealthed for 10 seconds and come back out with a stealth deadly attack.. I don't see how this is any differnt then planar shift? or some trashy tos bubble with a totem on the ground melting ppl. So we can't go near them, we die and if we run away from them, we die again... who ever is the guy balancing your game, came straight out of dungens and dragons online, clearly.

Next let's move on the stamina issues. Necro pets that not only do dmg while he runs around a totem and just kites you all day long while his pets do all the work and he just laughs while doing it. They either dmg us for a ridiculous amount or they drain our maana and stamina in seconds, leaving everyone white hitting all day with no regen what so ever. Yeah we can spec for "getting stamina back"... so we use that ability, maybe win or lose the fight, once we die and come off the rez pad or mini game, were useless for the next 5-10 minutes for stamina, hmmm odd. So now not only did you make melee and the game extremely slow paced for kids who absolutely suck at moving in this game, you also made it even easier for casters to milk us like a warm cow tit while were trying to get to them. Then on top of it, half the classes have to "spec for a charge" to even get to these classes. Let's also look at how the stamina pots work, the initial pot ticks at 135 with NO big burst at first, the stam pool has been increased in patch 1.05, and you left the pots exactly the same... I am confused, aren't the ratios of the stamina pools suppose to match the pots???? Which you guys SAID U WERE GOING TO FIX and DIDN'T AND STILL RELEASED THE PATCH.

Moving on to destroyed gameplay mechanics. So while melee is trying to land combos on kiting casters with lack of stamina and white hitting like a bunch of warcraft newbs, we also get "red" arrows and lose dmg for every combo sequence we miss, on top of that you could get all 3 greens light and then swing your slow animation and the person may justdodge it. So a caster can stand there, press his caster button, not have to worry about combos and chasing after people, since he is ranged and he has only one thing to worry about which most classes don't have, immunity ratings on their gear for "resists". Then on top of that, they have aoe's that just destroy people and bubbles on all the healer classes that heal them back to full or hurt u for hitting them while bubbled. Man you guys must be a big fan of Merlin in the King Arthur days to give out this much power and water down the game this bad.

The Lack of REPLAY VALUE CONTENT, WATERED DOWN GARBAGE CLASSES, CONSTANT DELAYS AND LACK OF INFORMATION ON WHATS COMING OUT EXACTLY and LACK OF REAL PVP CONTENT THAT people have been asking for since launch is out of control now.

-Cross server Minis, if u can't afford it, stop asking us what we want and shut the game down already.

-PVP Towers, I know you will screw this up and make it useless like PVP resources, where it will have absolutely no replay value

-Useless PVP resources that have no meaning, enough said

-Kheshetta Gaurds EVERYWHERE, WHITE SANDS HAS LESS. People ask for less, you give us even more and on top of that we get mobs that aggro and cc us during battles in Khesh, pathetic.

-Garbagio watered down gameplay, stats on gear is fine, watered down easymode gameplay, I love how you slapped all the people that stay subbed for the pro combat system in the face, thanks Funcom. Now magically everybody who rolls a caster and plays it for a month is "suddenly good" the very first day of 1.05... I wonder why.

Also Just blow sieges up, obviously you don't want anything to do with them, they lag, the servers crash, it's buggy as hell, hard on comps, so make scaled pvp maps for 20 on 20 and just scrap sieges. Merge all the servers in to the pvp battle map and presto, you got yourself a good start on pvp replay value content that will keep people wanting more. Make sure it's done right, but of course it's like talking to a wall, instead your going to give me some garbage social item and some over powered easy mode crap class mixed with more stamina drain and some new super strong gaurds to protect people in the expansion pack. Go funcom, you rule.

Ofcourse I have "edited" some of his stuff to make it more....readorz friendly (and by edited I mean cuted off some of caps locked "I will leave this game" parts )

Honestly - I don't care for half the thing he posted about (not that they are not an issues, they are just not pressing issues TO ME) all I want is revamp for assassins that will make the class not powerful, not even efficient, but interesting to play. Check out new dark templar: now that is some interesting shit! You get auras, buffs, combos for diffrent enemies types and you can switch, tweak, click and mix that all you want - even simple Villa is a joy ride with this class (if only I was more into this soldier archtype...but I am so not). Having all 6 skills on my bar on constant CD is not my idea of "fun".

Moving back to the thread on US boards:
apart from being pretty well writen pice of "wall of text" it made be realise how mature and well mannered the EU community is and how now I do NOT want the boards to be merged. Check out some of juciy replies:

Holy wall of text batman!
Couldn't you just have summed it up with "I don't like casters QQ"?

then more pics are thrown around

I was amazed! Welcome to WoW forums, bitchez!

The pic in the post is my char with his skin bugged from Vampyric Leech. Go bugs!
Posted by Slith at 1:04 AM

It's only too true unfortunately. Experienced pvpers can have a tough time on their melees in group pvp, so you can imagine how newer players would feel - they would either quit or roll casters themselves.