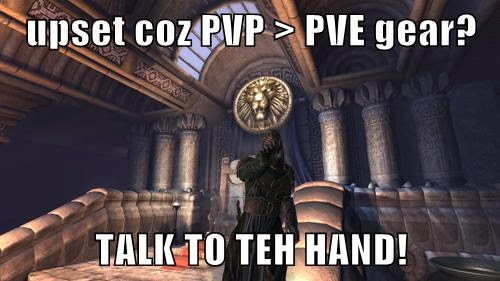 Once again Senior Designer Matt "already beloved by all" Bennett outdone himself by posting  PvP Gear - Stat Redistribution - Tier 3 thread showcasing improved pvp amors for all classes. I can't really speak for others than assassin players because I play only assassin nor I am all that interested in the rest of archetypes, but it seems like the soldiers got hit with huge nerf bat. My stance on that? Hell, it's about time.

Here is the post for all of yo non-subscribers slackers out there:


Now for the armors:


Of course just looking at armors won't tell you all that much so I took the liberty of doing the number crunching for you:


Armor & Critigation:
Pvp armor value is gone, but armor in total is increased and now even beats T4. Critigation got huge boost and also beats T4. This might give assassins a little more upper hand against rangers which where crit-killing assassins way too often.

Constitution:
Again a pretty good upgrade. New value gives +3360 Health as compared to old +2968 Health. This isn't all that much on melee cloth user, but if you add 2 x +25 const from weapons you will get +3760 Health which translates in 792 HP difference. I won't mind having that extra life.

Dexterity:
Dex got small nerf. The loss of dex is compensated by more combat rating. Old set had 483 dex and new has 445 which is nothing compared to whooping 637 on T4 set. If anything the T3 should keep the old 483 or even go beyond 500 dex (with the reduction of overall combat rating). This has a pretty major impact on assassin survivability as the dex is the source of evade rating. PvP armor had already laughable evade chance and now it has even lower.

Suggestion: bring back dex to at least original value of 483 or bump it up to 500. Other solution is slapping some pvp evade rating on the armor.

Combat Rating:
Superb upgrade which bring T3 almost on par with T4. Nothing to add really.

Critical Rating & Critical Damage Rating:
With it's 233  new pvp armor is closer to T4's 245 which is acceptable. T4 still maintains an edge when it comes to damage (from both combat and critical rating), but suffers greatly compared to T3's survivability (the armor got boost in almost all survival related stats). I think this difference in crits in acceptable, especially considering that only pvp armor has tenacity to REALLY take advantage of those crits.

Protection & Tenacity:
Those two stats might not have anything in common, but in fact both of those values got pretty major buff even thou those preformed pretty good in the past with much lower ratings. Tenacity on old T3 armor was high enough so when assasssin equipped Master Assassin perk (+1800 tenacity as far as I remember) it brought up overall stat to 105% Tenacity. Obviously with the upgrade equipping Master Assassin will give an overkill on Tenacity. This is both good and bad. An overkill on tenacity will be even higher than now so it might feel a little wasteful. However this opens up assassin to new possible perk builds coupled with new possible builds granted with new protection. Right now undisputed king of pvp are the hybrid builds (example here: http://goo.gl/ch8bNj) because it gives assassin best things of all trees: both damage and the protection. With protection being as high on it's own now it can open up the assassin to more experimentation with lotus/general or corruption/general builds. Lotus builds will be more effective because it's biggest advantage, which is protection, got upgraded. At the same time Corruption could be more viable since it's biggest weakness - lack of protection - got smaller. This is nicely coupled with Tenacity change: since master assassin perk is no loner oh-so-best-choice lotus/gen and corruption/gen can supplement their builds with things like castration perk (to generate sufficient shard amount). Sins of the Flesh could also enjoy more exposure, especially now that tanks will get less of a walking-behemoths the -15% healing debuff could come in handy.