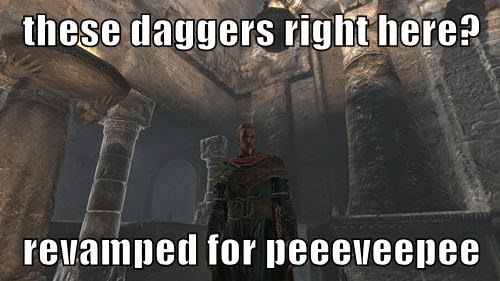 And so as foretold by Game Director Letter – December 2013 T4 pvp gear is coming and T3 pvp gear is getting an upgrade. Neat eh? Well since this is handled by Senior Designer Matt "already beloved by all" Bennett aka CirithGorgor he simply jumped into the task (instead doing it the usual funcom way) and already posted  Stat Redistribution - Tier 3 PvP Weapons thread on TL. For those of you who don't have access to TL forums (and are milking me for free news) here is the whole post:

In this post I will only cover assassin's dagger "Highlord's Dirk".

This is rather disappointing as the dagger hardly changed at all except small DPS bump. I do understand that PvP T4 is intended to be a march for T4 PVE gear (BTW it should be BETTER as PvP weapons should be best for PvP) so I am not setting my expectations to Shiv of the Autumn Night's level, but at the same time in it's current shape PvP T3 is still just "pretty good" as opposed to "the weapon of choice for non-raiding pvpers".

Since Highlord's Dirk has so little of stats diversity it is easy to compare it other non-T4 daggers.

Hightlord's Dirk needs constitution to be a viable alternative to other daggers. This added survivability is especially important considering that assassin is cloth wearing melee fighter with shortest weapon range in game. In other words: from purely melee mechanics perspective assassin is at biggest disadvantage compared to any other class in game. Both Requiem of Pain and Skirmisher Dirk have constitution and to add insult to injury Skirmisher's Dirk, a pvp T1, is still looking as a viable offhand alternative to revamped Highlord.

The adjustment of CR and CDR on Highlord is negligible. It needs noticing that assassin class in PvP is pretty much based on CR and CDR as those stats are needed to take advantage of Tenacity. Assassin players are using master assassin perk which bumps up Tenacity up to 105%, but all of that is useless if assassin doesn't crit often enough.

Highlord dirk with its 50 crit rating and 60 crit damage doesn't even scale up to Spine of Dagon and Blade of the Ancient Sands which both are packing 55-56 CR and 65-66 CDR. If anything Highlord must match those since it doesn't have the massive benefit gemming that of Spine of Dagon dagger can take advantage of. If you look at gemmed T3 crafted dagger it surpasses T4 in few things.

Suggestion: bump critical rating to 56 and critical damage rating to 66 on Highlord's Dirk

Weapon damage is very important for Face Stab damage - the staple of assassin damage. Putting it at 81,4 DPS only matches Blade of the Ancient sands (also at 81,4) and is far from Spine of Dagon with it's 84.
At very least get it up to 82 so at very least it can beat some pre-T4 PVE daggers. Putting it up to 82 still places is behind anything T4/T3 crafted. 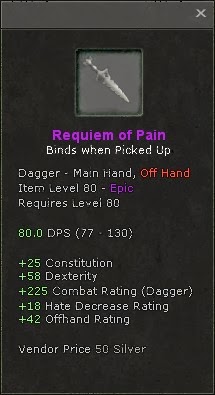 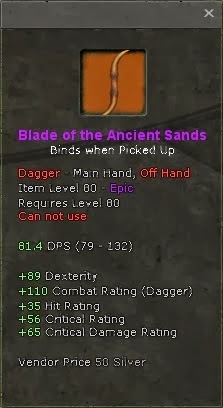 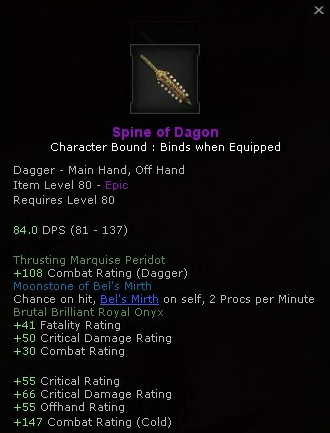