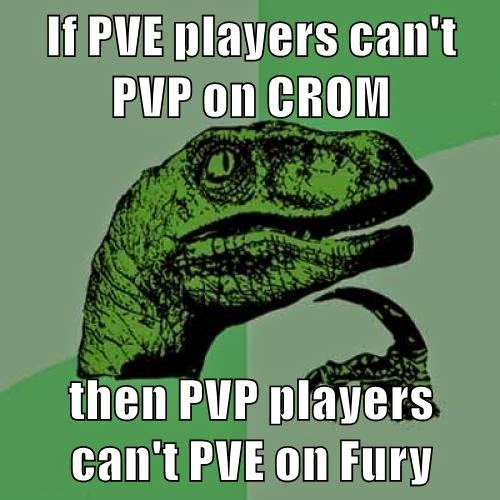 I am not here to prophesize end of AOC as we know it (people have been doing that since 2008), but it is hard not to notice a major shift in population. Again, I am not claiming that AOC is "bleeding players" (far from it, if anything recent updates brought more players back), but Crom has became black hole server that is sucking in players from Fury and Rage (that second one is pretty much a non-server already). Why is this happening? Well population > all. People will sacrifice personal preferences in order to get on populated server because at the end of day AOCs is a MMO and this type of beast thrives on player-to-player interaction. Fury still has some people because there is a pay wall between this server and Crom (aka paid transfers) and Rage players can't transfer at all. What would happen if you just let people transfer between servers for free? I don't have to do the guess work because I have witnessed it in Wildstar which was launched last yet. Interestingly Wildstar team made every single mistake possible, pretty much retracting the steps that Funcom took with AOC launch. Examples? Wildstar launched with gross abundance of servers and then had to merge them all into mega-servers giving EU and US players one PVE and one PVP server. Now the interesting part: Carbine (team that developed Wildstar) made up this dumb rule that PVE players can't transfer to PVP server, but PVP players can transfer to PVE (the reason for that was, get this, "it is harder to lvl up on PVP server").
Here is where shit went wrong: since PVE server had better population to begin with some pvpers decided to move to PVE server and that created snowball effect of pvpers transferring en mass.
After few days PVE server became the only server and PVP server is left as place for odd balls and angry loners (I am both those things). You can check the PVP server boards here and here to get the full story.

Same thing is happening to AOC and the only factor that is preventing that from fully unfolding is above mentioned transfer fee. This is, of course, nothing new, but the all time low in population resulted in end of T4 and beyond raiding  with many last of dedicated raiders leaving for Crom. With geared and experienced players leaving the server it is pretty much impossible to recover from that: there won't be people capable of raiding nor players experienced enough to lead them. If T4 can't be farmed on regular basis then no guild or group of players on Fury can even dream of attempting T5.
In this state T6 raid (Palace of Cetriss) and crafting revamp (which seem like will be PVE focused) will be proverbial nail in Fury coffin.

With PVE activity dieing down on Fury the state of PVP is far from declining. If anything minigames are poping all day and all night. But then again if miniagames are your thing Crom can offer same content and probably even more minigames on hourly basis.

With the addition of Arenas (instanced PVP) Crom players will again take advantage of superior population while on Fury people will be forced to play against same, small numer of teams.

And how will Funcom react to this? I doubt it will be even noticed. Server mergers/folding are bad press for any MMO and seeing how Rage is still kept around the bar for "population deemed acceptable in order to keep the server running" is set very loooooooooooooow, So hold on tight Fury, your population is due for some spring cleaning,  Crom has a broom and knows how to use it.
Posted by Slith at 7:53 AM

I know this will sound like nit-picking, but Wildstar didn't make up that rule about PvErs not being allowed to transfer to PvP servers. WOW had this way before, with the same explanation (its easier to level up on PvE servers, so being able to level to cap and then transfer to PVP would be unfair).
Considering that, AFAIK, some of the Wildstar-guys worked for Blizzard before, its not a surprise they took that rule with them (and I guess most MMO developers have looked at WOW to study what they did right anyway).

With WOW of course, it didn't ruin server population that much, I guess their PVP servers still are doing ok. I am not even sure whether WOW still HAS that rule

well they adopted that idea as their own so they were agreeing with it, thats enough for me. I guess it didn't really matter to PVPers who's idea that was, just that the server got ruined.

Oh I definitely get where you are coming from! I am sorry if my post came over as nit-picking or anything. I thoroughly enjoy reading your blog and the thoughts in them.
Your posts even got me interested in trying to create and level an assassin in AoC (a class I never thought I'd try), or a class I always was interested in and played in other MMOs like TESO, an archer (even though I hated hunters in WOW, I like archers).

However... I doubt I will. I created both an assassin and an archer, but ddn't even get them through the tutorial yet, because for some reason, I can't get myself motivated to level chars again.
Tortage is cool, but most things after I don't wanna go through again, sadly. I love the setting and style of AOC, I really do... this game is one of the best when it comes to transferring a game world and atmophere from the source (REH) to the PC, and I was totally captivated by the game-world when I first tried it, but for some reason, I simply find myself logging out again after a few minutes... not sure whether its just the thought of leveling and the forth-and-back it entails, the grindy parts, the community (I usually leave NPH channel right away on each new char), or whatever.
This is sad, to me... I love the setting, love REH and his work, and really wanted to like this game, but I simply don't anymore, and right now I am not sure what direction the game is even headed in.
Thank you for the great blog, I spent most of Friday evening and Sat morning reading it!

I never took your comment as nit-picking, I always love to interacting with readers in comments.

As for trying to get into a game: jumping into 7 year old MMO is a daunting task.I myself find myself in a perpetual cicle of buying new WoW expansions only to find that I can't get into it. We all crave familiarity and when presented of overwhelming task of "tacklking" 7 years worth of content our brain snaps. I certainly feel so about WoW and it might be the case for you with AOC.

You might be right. However, I have often switched MMOs, going forth and back. WOW has been the one I played the longest, yet I only stuck around for MoP (didnt play much anymore, last raiding was in Cata), and unsubscribed a month after WoD came out, in Dec 14. Haven't had ANY craving to return.
Maybe it's the feeling of familiarity or lack thereof... I miss the older xpacs, miss Northrend, Dalaran, even vanilla even with all the flaws it had. Disliking Draenor, the lack of stuff to do at 100, garrisons etc.

I have played LOTRO, TESO, WOW, UO, SWTOR, have tried FF14 and TSW (didnt get into those two much). AOC I played for a little while and even have a char at cap. I love the atmosphere of the game, I just for some reason can't stomach the leveling-process and some of the grindiness.
I will FOREVER respect AOC for how well they converted the creations of REH into a digital world though, so even though I may not come back to the game, I will always have a soft spot for it in my heart.

I very much respect you for not only your blog and your passion for and knowledge about the class you play. Sticking around for so long in a game that had some really rough times, achieving so much (the kills, achievements, class knowledge)... respect!!
Thanks for sharing your thoughts and experiences here!