Joel is no longer master of it all! 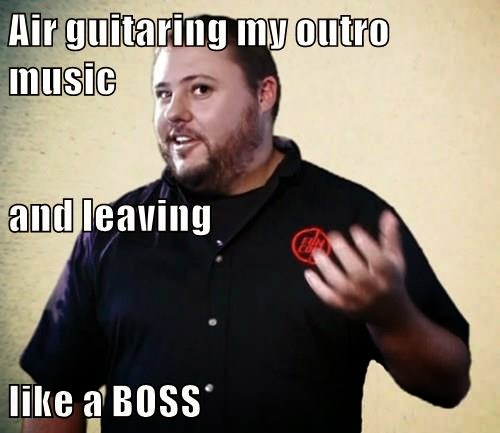 It seems like yesterday when someone from Funcom dropped a hot tip in the comments saying "Everything is true, Joel is "the master of all" now.."

Game Director gave us some hints about him stepping down from his current position:

I'll chip in a bit.
I haven't died guys, and I haven't left Funcom.
I've been asked to work on something that is super exciting and totally not something I am allowed to talk about, and the time commitment means that I can't keep up my duties on TSW and AoC (AO I have been mostly advisory for a while anyway).
But I am still right here. The entire roadmap we went over in the US is based on my planned outline for the game going forward (yes I still have plans through Issue #24 or so). I'm a message/call away for Tilty and Scriv and work aside, we're pretty good mates so I will be talking to them regardless. I'll also be playing the content and sending my feedback to the team.
I just can't keep up with the day-to-days of TSW and AoC while doing this other thing - it's more work than one person can do. TSW has been going from strength to strength lately - all of the live games have - and my moving off is actually more of a consequence of that success.
And while they need to change my forum tag to a retired tag, I am still going to pop in and post. They can't stop me (actually they can, but please don't Tomium)

This reads like either "Funcom has a new project and JB is going to handle it" or "Lego MMO is tanking and I am supposed to save it and sound excited at the same time". I find JayBe to be very genuine so I am assuming that indeed Funcom has something new going for them and Joel is the right man for the job. I think a lot will be revealed in FC's Q1 report which is due soon.

Joel Bylos had 2 years to tackle AOC and here is how I would grade his performance:

Right off the bat: Joel didn't have a huge team or budget. It is hard to do extraordinary things without extraordinary money. It is just that simple. If I had to point to strongest points of his regin as Game Director it would be this:

Improving existing content, quality control, bug fixes
I always hated how old content in AOC, even when obviously messed up, was left there to rot (I am looking at you Bori!). Joel had a clear vision of refining existing stuff and a clear example of this are World Bosses. This content was already popular, but Joel and the team tinkered with it some more and made it great. Obvious bugs and flaws were very quickly adressed (like guards and criminal debuffs in Pvp daily zones) and bad systems are due for a revamp (like a notification system which is badly needed for things like PvP events).

Being ready to back down from previous decision
Joel displayed many times that he can drop some idea on the community, listen to the feedback and then decide to change his stance. Unchained PvP Revamps and The Great Hyborian Race are good examples of that. Both were a horrible ideas and when asked about them Joel was ready to admit that it might not be best content to throw money at. Same goes for pvp systems: at first Joel said NO to even simple pvp weapons stats changes and then gave as a full blown pvp items revamp.

Nailing it
With his limited time and resources Joel made few good decisions that paid off immensely: achievements, loot Progression in Tier 5 raids and T5 unchained raid. Not many truly believed in achievements to have any meaningful impact on AOC and yet here we are with boards full of achievements related posts and Tortage filled with new and returning players. New raid, while totally a re-used content, was badly needed to keep the raiding hordes of Crom in the game while waiting for T6 Palace update.Changes to the T5 itemization where great for two reasons: those open new possibilities for the future loot updates (legendary cloak is a good example of that) and it terms of power it has little effect on PvPers.

Joel Bylos, unlike many AOC forum posters, is not perfect. I have few grudges:

Not adressing group pvp issues
While the team did a lot of the pvpers the main woe remains: pvp minigames are still "solo" pvp content that you play with random strangers over and over again. Pvp streak system seemed like a perfect opportunity to bring back Tournament mode and it was even mentioned in directors letter. For some reason the team backed down from this design and never really mentioned it again. The added new pvp stat that counts minigames left is a pille of mess that counts the amount of bugs players encountered rather than actually games they abandoned.   In Joels defence I have to mention that he did change his stance on PvP Arenas, but we don't know how that is going to turn out.

Cash shop taken to the extreme
The cash shop updates for AOC were horrible money grabs. Don't get me wrong, the game needs money and I am providing it for years now, but it just screams bad design when certain items are real cash only. Everything should be available through content event is reserved only for premium players. Prime examples are chests that expand your inventory. Why can't we get the from just playing the game? It is "pay us not to get screwed overy by obviously flawed inventory system" type of message.
Indemnity consumables are even more atrocious: it is an item that you consume in order to prevent your pvp streak quest from failing when you lose a minigame. Ideminty protects the player not only from more skilled opponents but also from AOC bugs (like server kick, being CCed under the map, joining minigame with cowards shame debuff) which are there, ready to mess up your streak.The problem is that indemnity is a cash shop exclusive and it is another example of "pay us not to get screwed over by both the bugs and random people we are forcing you to play with".

Lore fail
I simply can't stomach lore behind the pvp events. The very idea of picts just chilling in major cities all over Hyboria gives me a nerd rage debuff. 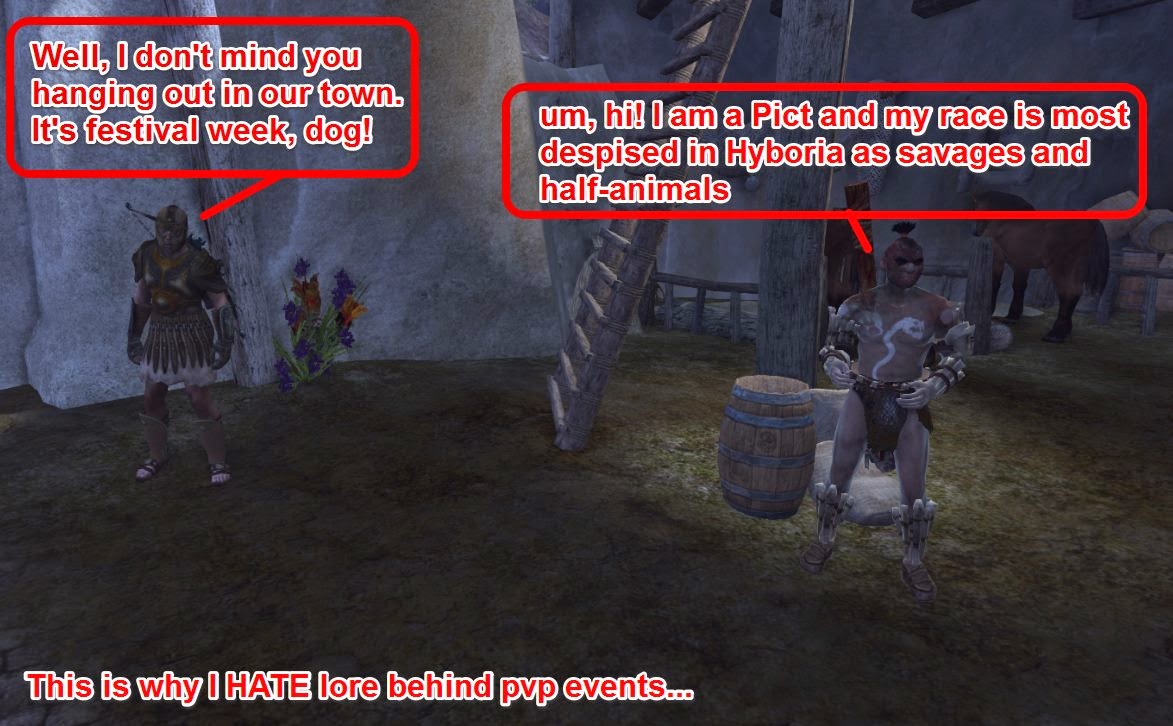 The story is bogus and it doesnt make any sense (and BTW the story in a nut shell is: "we are doing the events so we get to hang out where we want, but don't worry, we are kinda good picts").
Anyone that have read the original REH Conan stories will know that it's against the lore.

It was Arus, a priest of Mitra, that brought Picts into contact with Aquilonia.

"Picts now came and went freely into Aquilonia, under safe-conduct, and
they returned with more information as to armor-forging and sword-
making. More, they entered Aquilonia's mercenary armies"

The only problem is that happened for the first time about 500 years after the events shown in Age of Conan.The story in the pvp event is poorly written. It is actually the first time I have seen AOC treat cannon lore badly.

So there you have it folks! Joel Bylos, overall, did very well and I am sure he is the right man for whatever new project Funcom is cooking up.

Regarding picts: why complain about them being out of place in cities etc? We have demonologists and necromancers running around willy nilly with their ridiculous pets in plain view of Aquilonian priests and Cimmerian chieftains, not to mention people riding tigers, wolves and the occasional serpent-thing. I feel like picts is far from the biggest offense, not to mention that the people of Tortage seem perfectly fine with n00bs running around in Pictish leather and feathered caps.

I haven't read that much Conan yet, but I understand that the picts aren't all bad - they were the good guys in Kull's era, and REH even wrote stories (albeit in a kinda different setting) with a pict hero.

"A thousand years after the lesser cataclysm, the western world is seen to be a wild country of jungles and lakes and torrential rivers. Among the forest-covered hills of the northwest exist wandering bands of ape-men, without human speech, or the knowledge of fire or the use of implements. They are the descendants of the Atlanteans, sunk back into the squalling chaos of jungle-bestiality from which ages ago their ancestors so laboriously crawled. To the southwest dwell scattered clans of degraded, cave-dwelling savages, whose speech is of the most primitive form, yet who still retain the name of Picts, which has come to mean merely a term designating men—themselves, to distinguish them from the true beasts with which they contend for life and food. It is their only link with their former stage. Neither the squalid Picts nor the apish Atlanteans have any contact with other tribes or peoples."

Kull stories take place in pre-cataclysm era. After the cataclysm Atlanteans (Kull's people) got de-evovled into apedom and Picts got de-evolved into cave-dwelling savages.

Picts of Hyborian Age are little more now than those cave-dwelling savages but still very primitive. In short: they are nothing like Picts in the Kull stories.

As for players playing as necromancers etc. I like to make a distinction between players and the world they inhibit and it's ok in that context. You can really use "NPC ignore player's necro pets" to justifiy a blatant breach of classic REH Conan lore. Especially when the whole game is build around respecting the IP. Moreso that Joel Bylos admited on the forum that he wrote the storyline about Picts and it was rushed.

As for wolves and tigers: Conan lore is full of even more absurd mounts so its not really that extreme (check http://aochideout.blogspot.com/2012/02/lore-whore-magical-mounts.html)