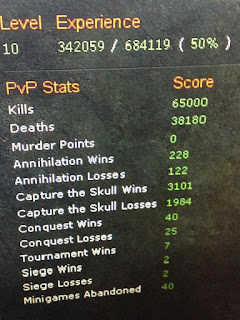 While this wasn't really posted on the blog some of you that follow me on twitter/facebook know that I have moved to Crom about a month or so and also joined one of the most renown raiding guilds in AOC's history: Destiny. Upon my arrival to Crom I had to kiss my name goodbye and rebrand my assassin as "Sliith". That  was a pisser but such is a prices for moving to a different server (on top of 20 EURO price tag). I have had nothing but positive experience with Destiny folks and they were kind enough to offer me spot on their T5 raiding team. The vibe was great and the raid team was as skilled as you can get so T5 boss killing was, as expected from any established raiding guild, a farm. Yet somehow I couldn't really get into raiding mindset and with each raid I felt more and more like I am doing a chore rather than enjoying a privilege of  T5 access. While epiphany of "shit, I might not be into raiding after all" was neither sudden nor really an epiphany it became painfully evident that I have zero business changing out on Crom for PVE reasons. Looking back at my raiding experience so far it's pretty obvious that whenever I was really doing any regular raids it was in order to get PVE gear for PVP. It was at that time when PVE weapons were superior to PVP weapons and it was common for people to raid T4 (or at least farm cloud) in order to get them weaps. I am very much a min/maxer kind of guy so I will grab an upgrade to my character if I can. Also it's not like I need an edge over other players but I hate being at disadvantage and that was the case with PVE weapons at that time: those were just so much better.  In my humble opinion raiding as a whole just went to shit-town on Fury. Of course pure PVPers dropping from raiding all of sudden had a snowball effect with more and more people leaving for Crom. Since there is nothing in PVE that I would really want being at PVE server discouraged me more and more from logging on. I quickly realized that I am missing a vital part of AOC: open world pvp. It's not like open world pvp is all that wide spread on Fury, but I like the idea of it: at any given moment you might get jumped (aka ganked). For me removing that feeling/idea by transferring to Crom has made AOC experience bland and tasteless, it was no longer brutal Hyboria but rather some kind of la la land. This isn't a jab at Crom players, its just my honest assessment of what I like in AOC and what it felt like to lose it. Of course "the grass is greener on the other side" was also a factor in my server transfer. Crom, at least in my mind, was a shiny beacon of evermore good stuff. More players. More content. More activities. That turned out to be a lie (or to be more frank: I was delusional about it). Crom has more PVE activity for sure, but that is it. It is NOT Fury server II with everything better. It's just different and that doesn't translate into "its just better". Prime example? World Bosses. I am not a huge fan of thing content, but at least on Fury you had to group up into a raid and then mind the gankers trying to strip your out of your boss rewards. That was part of the fun. On Crom? You just wack the boss into oblivion and the excitement lies in rushing into another instance to tackle another boss and doing it before the said instance gets filled with people.
Minigames on Crom are just about the same like on Fury. So if you are like me and you like: PVP as main activity, soloing achievements (quests, panoramas, treasures) and doing occasional dungeon run then Crom has nothing to offer you. If anything the experience will be worsts on Crom, at least I found that true for me.

So I have buckled up, ponied up another 20 EURO and went back to Fury where I have re-claimed name "Slith" and my spot in Clan of The Free City guild. In effect, if it wasn't for 40 EURO billed to my credit card, no one could have ever suspected that at one point I have walked  the lush PVE fields of Crom server.

But this episode was supposed to be about 65.000 kills mark. So yeah, that's a thing now. I have heard a rumor that some were around 67 k the kill counter restarts to 0. Is it true? Well, I am about to find out soon enough.

Welcome back Fury, I missed you.
Posted by Slith at 7:06 AM

"Crom has made AoC experience bland and tasteless".

That is my opinion too.

I started playing AoC in PvP server, where danger and risk nourished fun at every corner of the land. Later moved to PvE, where raiding was nice but only fun for a while.

These days I don't play much but still remember those old AoC great pvp moments.

you and me both

About that 65K kills thingy you might ask svartie. If i remember correctly he's hit that mark on his ranger. Maybe Berzerkker on his guard too, but he ain't around any more, as are many good lads of his former guild.
Anyone still remember this guy: https://www.youtube.com/watch?v=49147ggI3po ? :)

I remember Svarty hitting that numer on ranger years ago (back when Kesh PVP was the way to get pvp lvls). From what I have heard his counter rolled back to 0 but I never confirmed it with him.

Premades tomorrow from 5 and out;)
I want you in my team! Willd greets you=D

Although i disagree with you in some things you post at times, for example best version of conan was 1.4 for pvp in my opinion 1.5 ruined the game and pvper's left in droves i totaly agree with what you write here. Conan without open world pvp is not conan, there is no thrill no excitement! I dont play anymore as i used to (maybe log once a year) but i read your blog as a fellow pvper and adventurer.

Hey man, thanks for a comment, I appreciate it. I too long for the days of 1.4 but when I think back about all the bugs (like cunning deflection dealing 2k damage on fear) and all the nonsence (chain CCs) I think a lot of that 1.4 flavor is nostalgia.