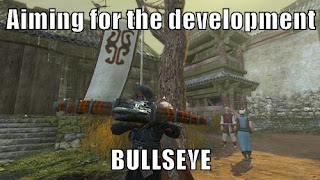 After talking to Cirith in recent interview I feel like doing some post-mortem on it and giving you my piece of mind on the shape and the direction that Hyboria is taking.

Dungeon/Raid finder vs Crafting revamp: I haven't actually seen anyone being absolutely appalled by the development decision of giving D/R finder a priority over the long over-due crafting revamp. What is D/R finder? Its a sign up system that works pretty much like a minigame queue: you just pick dungeon/raid, select your role (deeps, heals, tank) sign up and wait to be teleported with your newly found group into the dungeon (at least I assume THAT'S what it is). It's a MMO industry standard that both AOC and TSW need to adhere to remain viable and somewhat current. Of course since it's in World of Warcraft it is pretty much in every game. I have had my taste of it when dabbled with WoW and I liked it. Current, very very dated model of just spamming LFG chat with "LF KK run, exp/gear/perks" is not only super old, but also a major content-wall that keeps new players form experiencing all the dungeons that are out there (hell, I still need to do a lot of dungeons). Besides I don't think crafting revamp would be all that successful since AOC stats system is all fucked. Current model rewards stacking very few select stats (crit and combat/magic rating) and I am pretty sure crafting revamp would result in either cranking out only sub par items that were only usable to modestly geared characters or an arms race in which people would create items en mass in order to hit that perfect stack of crit/combat/magic rating that would go beyond the T4 budget stats wise. Both scenarios would be a let down. AOC team needs to make a spot on decision for the content just like they did with achievements. Pouring resources into crafting and not having it be anything less than the second coming of Jesus would be a proverbial nail in AOC coffin (and them nails just keep on coming as prophesied by forum posters...since 2008).

When it comes to Tales of Hyboria which are new adventure packs its no secret that I am less than enthustastic about it's first installment. I really didn't want to ask questions like "how come Shadows of Vanaheim aka Shadows of Cimmeria Reloaded suck?"and to my surprise I got a reply exactly to that unasked question. SOV was a rushed and overpriced content. What I was afraid of seeing is something straight out of American Psycho where main character commits heinous crimes and gets away with it for no apparent reason. I am not against Tales of Hyboria per se, hell if its done right then bring it on! The interview gave me hope for the future that we won't see another blunder like SOV. And I have to agree that with AOC being strapped for cash (Khitai sized expansion is out of the question) the only way that we can see those cool locations pulled straight out of the lore are bite-sized adventures like SOV (I mean not like that, but also like that). I would love to see Aquilonia and Nemedia go at each other throats (Border Range in Wild Lands could be used for that) with Conan joining the battle along with the players (get that lazy bastard of out that castle!). What else? Well obviously Hyperborea is overdue! Just fix price..and quality..and replayability..and story and I am all over that next adventure pack!

I am bummed out by two things: both PvP additions and progression systems are probably years away. I mean placing them on a the development timeline next to "sometime after crafting revamp" is pretty much saying "it will be ready when Moses comes back". Solo arena, when and if its ready, won't fill any need that solo group pvp minigames are not already providing (those are providing mostly misery for all involved). I don't see good things in AOC pvp and onslaught of people coming from Fury to Crom (yours truly included) only show that PvPers are in "abandon all hope" mode.
Well, at least we will get that one server tech soon enough, eh? *wink* (and if you don't get my wink I will be blunt: everyone will eventually transfer to Crom and two remaining pvp servers will be an empty shells).

So we all just might as well jump with both feets into raiding because this is where AOC will be at for the years to come.

Firstly thanks again for organizing that interview it was really appreciated. On the down side of it im one of those that wasnt overall happy with Ciriths answers. I understand his hands are tied with what he can say & do but ultimately the result was that theres not much happening with AoC, now or in the long run. Combined with the weekends news of them looking for potential investors/merges I cant say that im that positive for AoC's immediate future. I know there are many games that have been said "will die soon" like AoC & are still here now but I think the game is finally over for Funcom, with the debts they have & minimal income from their titles, combined with the fact that AoC is a coding nightmare I cant see it being transfered to any new company who would be willing to take the risk.

Anyway as for the Dungeon Finder, while I agree it adds a degree of ease to any MMO, the fact that AoC doesnt have one is one of the reasons I like it so much. You actually have to interact with the community in AoC while in other titles you just click, port & run making dungeons lacking a lot of enjoyment. Its similar in Rift also with the IA's instant adventures, while the feature itself is brilliant in that I can log, click & be straight in a 24 man group for questing there is zero communication, its just mindless zerging.
You also have to question is it entirely necessary? For new players it is obviously but with Szemra & Tomium doing nothing to promote AoC there arent many of those coming through the doors, so it is in essence a utility for the existing playerbase which isnt needed. Another hand me down from TSW an that is all im afraid.

Dont get me wrong I LOVE AoC but these last few months Ive really lost faith in it mainly due to the community managers lack of interest in their own title. It highlights something going on behind the scenes which has become all too clear this weekend.
TSW in the past 6 months has been pushed to appear a profitable & stable acquisition for any investor while AoC I think is heading for lights off. Hope im wrong but some honesty from Funcom regarding this is what I wanted from an interview.

See ya in Hyboria!

Good points. I try not to follow any news directly related to Funcom company, its depressing.

lol yeah I dont mean to be depressing about it, im just a little disheartened at the moment.

I dont think Funcom has ever given AoC or the games community what it deserves, without doubt it is still one the finest MMO's out there. Now to just find the few million dollars I lost down the back of my sofa the other week so I can buy it out:)

I remember when I came back for WoW a couple of years ago and had to deal with this dungeon finder. I kinda felt totally replaceable, anonymous and amputated. I was used to build up my own dungeon groups and that worked pretty well back in classic days. When I came to AoC at post-Kitai stage, I experienced this issue from the other side. The lacking of a proper df tool indeed was a major content wall for me. I just made it to a couple of dungeons. Mainly because other player felt pity about that guy "w/o xp" yelling for a group.
That was the main reason for me to quit AoC. I came back for Rage PVP later, but quit again before Kitai.
By then I thought that a df tool wouldn't make any difference. I would have been sitting all day queued for dungeons waiting for the invite, that'll never come.
Sorry for the fatalistic talk. It's my way to deal with broken dreams. :/