1 year of fail: Failcom fails not to fail again

Today we were supposed to get this:

"People of Hyboria, King Conan, beloved ruler of Aquilonia, celebrates another year of his reign over the Jewel of the West. To honor this event, you all are invited to take part in the small festivities happening in the Tarantia Noble District outside of King Conan's castle tomorrow, Saturday 23rd May starting 13:00 GMT.

This would be a perfect moment to use the fireworks which were handed out to all the people of Hyboria this week (use /claim to get this item in your inventory if you haven't already)."

No one knew what is going to happen, but lets look at the key words in above message:

1. King Conan - we all luv Conan
2. King Conan celebrates - we all want to party down with Conan
3. Event- nice social stuff in MMOs. Evens are organized.
4. Invited to festivities - FC is organizing a party for players (see: event)
5. It takes place in front of Conan's castle - CONAN!

What we knew is that GM can do some pretty FUNKY stuff inside the game. For example they can spawn stuff and take over NPC to control them. 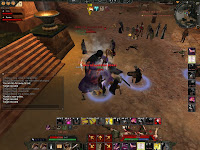 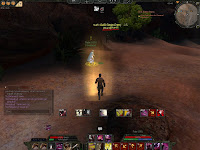 I wasn't expecting much, but I remember how excited I was when I first had a chance to see Conan in game. I am big fan of lore so seeing Conan doing anything in AOC was for me sorta like showing up just to see celebrity (something that I don't care about in RL). If Conan came and said "Thank you, enjoy this night, the drinks are on me" I would crap my pants from happiness. Well it wasn't quite like that. If we knew what kind of "event" it was going to be (meaning: not an FC organized event and nothing will happen) perhaps 4 people would show up (with 2 of them haning outside castle because they were on their way to turn in their quests).
The sweet wait
Noble district was jam packed with people. Several instances were created to support massive gathering of players. 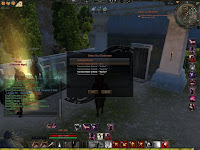 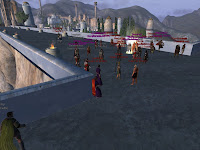 People were doing various things: some were jokeing in general chat, some were danceing and other morons were bashing each others skulls infront of castle's gate. I have to mention that some poeple were shounting for Conan to come out: We want Conan! Come to us KING! Show yourself Conan - it was a very good, but minor roleplaying and if Conan accually showed himself at that time (15:12), damn it would be good.

The wait killed us
People started to get uneasy and tired with the long wait (45 minutes in total!) so they made a thread (which is now massive) asking FC why there is such a delay. The FC reply was pretty fast:

"The announcement of this happening might have lead many players to expect a bit more than it actually was intended to deliver. The main idea was to provide a place where players can gather to celebrate and maybe use their firework items in bigger masses and get great screenshots for the competition described in the last newsletter than it is usually possible.

So the 'festivities' in front of Conan's castle are there to give players a point where they can meet, buy food and drink and celebrate.

We apologize if some expected more and are now disappointed. "

When this post was copy/pasted to general a HELL was let loose on every server (except PVE ones) and "celebrating" turned into slaughter. This is how the event ended on Aquilonia: 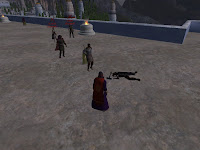 Guy danceing over a corpse. What a wonderful methaphor for what FC managed to do with their game over a year.
The "festivities" were over.

What the hell was that?
I don't talk about RL stuff on this blog, but I have to mentioned that I had to cancel a meeting to show up in Age of Conan for the even - this is how dedicated I am to this game. I know other people also held up their RL stuff just to be in game and some of them even RESUBED just for the event!!! The disappointment was crushing. The above mentioned thread instantly grew to 22 pages of angry players cursing the FC for cheating them out of 45 minutes during which they stared at castle's empty gates. This could have been a wonderful event even if all Conan have done was "/fart" emote infront of the crowd - that would have been better than nothing.

Exacly 1 year
I have bought aoc, installed it and created my assassin on may 23th 2008 - exactly 1 year ago. Todays festivities were great way to sum up what a crappy year this been for the Age of Conan.

People have fired of their fireworks (or shall we say: failworks) as they were leaving (totaly not in mood for a celebration), but I have decided not to use mine: here is something else for FC, happy anniversary, baby! 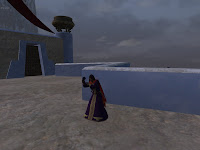 Well, the guards paid the price on the PvE servers.

Some of us even had a raid ready to jump Conan when he showed his puny ass, but no such opportunity, alas... Next time Conans tyranny ends!

Pretty much the best summary for this poor excuse for an anniversary event. Nice video too, made me chuckle whilst watching the disappointment thread swelling. Cheers for another good read :)

Great post Slith. I was pretty disappointed myself (waited there for like 45mins too with my guildies)

I wasnt really expecting Conan to show up (well, maybe a little..) but I was really hoping that GM:s or/and Dev's would have showed up to thank the player base. (and maybe do some fancy tricks for us to amaze.)
Ah well.. We know how FC is tough.

Loved your vid Raff.
Really summed it up! :)

The most bizarre thing about the whole event was that all those commoner NPCs were supposed to be animated, walking around etc. But by some weird stroke of fate they all bugged out staring at the castle entrance expectantly, which just solidified everyone's expectations that SOMETHING was going to appear.

wow what a biggie,you didnt meet conan <.<
go pvp and get your nipple set and stop whining :)