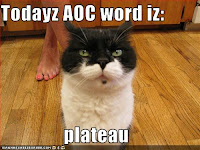 Lets learn new word: plateau. Age of Conan have reached a point of stability which basicly means no patches for a very very very long time. Since 1.4 didn't bring anything to the table (instance which no one runs and boredom kingdoms which no one fights over) we are still in patch 1.3 in terms of gameplay. PVP activity droped to all time low and it seems like everyone are trying to get them epics before 1.5 hits because it makes super hard to get them (guys, you have LOTS of time).
Assassin EU boards are filled with beginer stuff and TL servers are not being patched with anything regarding assassins. I hardly log on AOC these days because its super hard to get some quality PVP (same scenario: me vs 2 huge groups of SCUM and EMPIRE and no one else) not to mentione minigames.

I *really*, really* don't want to write more posts on how FC sucks (finding seals on old AOC fanpages as a contest? more like boretest - a test that is won by those who can find all seals without being bored to death). Since I got nothing nice to write I have decided not to write at all.
So, I will not be updating the blog as ofted as I used in good old days, but I am still around.
You will find some short news on my twitter feed if any show up.
Posted by Slith at 12:59 AM

WTF Slithery slith shit? For past four days I've been pvping kheshatta many hours per day there have been lots of pvp activity. Like yesterday and two days ago there were three crowded instance. You just choose bad times or something if you cannot find anything in khesh.

And patch 1.04 did bring some nice stuff on boards, like wing 3 BRC, better minigame system and some class fixes. And don't forget about slaughter house cellar, xibaluku and so on.

The only problem was that only lots of pve content came.

everytime I log on its ghost town. Perhaps you were the one that was lucky to find crowded instance

Don't care for PVE - I find it boring

Yeah but you indeed shouldn't generalize things too much. Great things came in patch 5, but not for everyone.

It's not too hard to change the instance, there are always 1-2 instance where is lots of zerging.

I am talking about my experiences with AoC, not general pop's

everyone is free to disagree with me

I was a good pvp but now Im a unknown raider.. this game is soo boring right now.. I think I need a break. 2-3 months would be perfect..

and I dont have more power to stay half day editing a video bug report to a broken combat system..

ouff this blog is beginning to sound like a depressed persons wiew on drinking a water trying to find the water from a tree,

log on , stop whining , get the nipple set and key is to BE HAPPE :D

and you should also try making alts , they do make the game more fun :)

I am getting nipple set today :) (2k xp needed)

I don't want alts, I like only one class - assassinos (and yeah, I played all classes on test live, not my cup of tea)

but I guess you are right, this blog is getting depressing, I will try to do some new content, if FC can't provide me with something positive then I will write some more guides I guess (from whispers ingame I gathered that this is main reason why people even come here)

Slith, you should try Reaver/general barb. I was totally surprised how similiar class it was the assassin class. The playstyle, everything is about the same :)

sure, barbs were always assassin 2.0

but no dirty, illiterate, unwashed barbarian in pelts can replace highly skilled assassin.