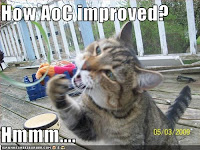 This is something I wish didn't happen: after hiting one year the state of AOC is EXACLY where it has been six months ago. I might just do copy/paste job and call it a day, but lets go over these one more time:

The good:
DX10 - you will probably not use it if you are a "KESH pvper". It's mostly used to stroke epeens of people who have the BALLS to post their cpu speccs in their sigs (who the hell does that?). It looks great non the less so I guess it should be counted as an improvment.
Rating: 9/10

The bad:
Crafting - crafting is nonexistent in this game. Still.
Rating: 1/10 EPIC FAIL

Itemization - Ever since I did about 15 epic KESH runs I am wearing same gear with sloooowly added pvp gear which takes forever to get.
Rating: 1/10 EPIC FAIL

PVP minigames - currently dominated by premade groups with casters. The only way to win is the get somewhat equal number of casters.
Rating: 2/10

PVP XP - pvp progression got turned into joke. Biggest guilds do "Nekid RP" to get to lvl 5 in no time. Your achievment as honest pvper is meaningless - there are tons of lvl 5 exploiters.
Rating: 1/10 EPIC FAIL

Criminal/murderer system - it got turned from "broken" to "nonexistant". It is used to let your buddies get more PVP XP for killing you so they can reach lvl 5 faster.
Rating: 0/10 LEGENDARY FAIL

Open world PVP - log on, go to KESH, zerg or die. Here is your content, enjoy. The "Cimmerian Boredom Kingdoms" died in two weeks, it was HUGE waste of time to development time and a big letdown.
Rating: 0/10 LEGENDARY FAIL

Guild dyplomacy tools - There are none. There is no support for guilds and server politics in AOC.
Rating: 0/10 LEGENDARY FAIL

RP support - GMs no longer act on RP ruleset infraction. Go ahead and make your "Supadupa" Barbarian, you won't get namelocked. Instead of social clothing we got "/fart" emote 0_o
Rating: 0/10 LEGENDAY FAIL

80lvl content for non Raiders - we got Slaughterhouse, somewhat neat solo instance. Even thou I like it a lot, its too little to cover "conent for 80lvls". The Xibaluku (or whatever its called) instance was popular for like 2 weeks, you won't get group for it even inside big guild (everyone would rather raid) not to mention PUG.
Rating: 3/10

Updates - it takes forever for Funcom to do any update.
Rating: 2/10

Keeping the dates/giving out ETAs for updates - they doesn't.
Rating:1/10


I can honestly say that with 6 months of development time was wasted. Yes, there is a mythical beast called 1.5, but it didn't come out today (not that it should) so I can't review content that isn't live yet. This is where we stand right now. Yes, there have been some progress, but no more than a drunk makes by falling over.
Posted by Slith at 11:12 AM

I know you've had some critical opinions like "why you are always so negative?" and "Dont talk that way about AoC! I love FC!" etc.. But man do I agree with you! It is good to see someone agrees with me perfectly and even makes the effort to write about it. Great post as always. Maybe one day we will get MMO that delivers, but I dare to say that it is not done by FC..
*thumbs up*

The thing that you can just go and copy/paste a few points from your post from 6 months back and they are still reasonable is pretty sad indeed. LEGENDARY FAIL FC!

I don't want to be mean or negative, but after one year its time to wake up and smell the coffie. I listen to a lot of podcasts at http://www.virginworlds.com/home.php (highly recomend it) and every single podcast mentiones something about Age of Conan in terms of failure (especialy no prisoners, no mercy show). People say that there haven't been any development in AOC for a year (DX10 was supposed to be out at launch, so was the pvp system). Many times I was REALLY PSYCHED UP to sit down and write hart filled e-mail on how they are all wrong and that AOC made a big leap, but then I think "what the fuck am I supposed to write about? Game client that is not broken anymore? That is like given :/"

To top it off Game Director makes those stupid interviews in which he talks about same shit over and over (problems at launch, fixed game client, plans, plans plans for teh future). I pay for this game exacly for a year so its obvious that I want it to succed, but that doesn't mean to turn my head from big pile of shit that this game's pvp conent (can't say anything about raiding) have became. This, ofcourse is not something that I could post on forums because the so called "FC critics" have already left the game and the remaining crowd are either hardcore fanbois or people that are yet to take a bite out of shit sandwitch that is AOC endgame conent.

Its is sad really since many of us (players) would have wanted this game to succeed and be something different and unique. I've been playing (and paying) for one year straight now aswell and I have plans to quit the game (permanently?) in early june when my sub runs out. Best of luck Slith, I really like your blog and I think you are one of the guys that has kept me in this mediocre game..

Sadly, I totally agree. I've been playing AoC now (actually tomorrow) for a year and the content added over the past year is either unattractive to players, worthless or broken.

I try really hard not sound to negative about AoC when friends/poeple ask my opinion about it however there are huge problems which I just can't deny.

- There hasn't been an actual patch concerning balancing since months with patch 1.5 as an 'excuse'. We have been playing in a world favouring casters over melee players and there hasn't been the slightest attempt to fix this. After 12 months ToS's are still Funcom's favorite pet and Rangers still dominate pre-40's. I know that 1.5 is "on the horizon" however this gives Funcom no reason to leave the Live-servers untouched for months.

- The PvP-consequences patch was postponed for months, finally released however it's still bugged and beeing exploited and again Funcom hasn't made the slightest attempt to fix this.
(Note: There is one thing Funcom learned from this situation, which is not to mention any release dates anymore, whatsoever *ahum*)

- Server merges causing lagpikes, making sieges unplayable which should be one of the biggest selling points of AoC. Mr. Game Director however doesn't seem to notice anything cause he states that "sieges are enjoyed right now" in one of his interviews.

- Player mentality. The typical 'roll PvE' attitude which makes PvP servers unplayable for new players and veterans alike. Just imagine you pick up a game and install it whilst reading the manual. After a while you're ready to carefully take your first babysteps into this online utopia but suddenly three rangers jump out of nowhere, pierce you with a dozen arrows, taunt you, harass you and finally telling you to "roll PvE" when you try to settle things with words. Please tell me how this behaviour motivates people to continue playing?

- Silly, stupid but gamebreaking bugs that came with the few patches Funcom offered us. Epic-farming in Potain anyone? PvP-XP exploiting? Overpowered Gem's?

Thinking about it, the only thing that keeps most players with AoC is the combat system, however only few enjoy this feature cause the rest will be rolling casters..

Thnx Slith, I hardly rant anywhere about anything but boy this does take a load of my shoulders.

Thanks for sharing it here Doemdenker.Well put together.