Night of the lost souls - spooky in "oh noes!" kind of way 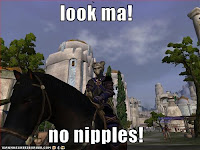 So the first event in the history of Age of Conan is coming to an end.
How was it? Definitely a step in a right direction. There is hope that FC will add more of these seasional events to spark up some server activity. The server was booming when patch went live and you could instatly find group to explore new quests. Nowadays...not so much.
The patch itself basically broke the game in terms of FPS performance, latency and stability, but that is a whole different story. Lets get down to the nitty griddy core of halloween event:

The story
The story is cheesy at best. No one expected anything epic in terms of lore. It goes down to cursed book rutine and you uncovering some secrets. It is standard halloween stuff. I think it was fine. 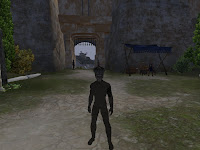 Rewards are social items...and they should be since this is purely a social event. The big big problem is that everyone doing the quest line (which is SUPER easy BTW) will get same rewards. After 2 hours the server was full of people in bandages or drunk with fermented brain juices. Quests replayablility? You guessed it: zero ! Most obvious and rational thing to do would be making the social rewards drop from the Bosses (and the quests had quite few of them). People would run the quests several times to get those rewards (hell, I would!) and some would half-kill themself infront of their computers to get demon pet reward. Instead FC decided that everyone will get same rewards and by doing this they allowed the players to burn through content (which BTW probably took weeks to put together) in an hour and made all the rewards less "valuable" because it takes zero effort to collec them all. No epeen to show off in the years to come :(

The zones
FC cleverly used old content with a hint of some new stuff like "corrupted villa". Not only we could revisit old and long forgotten places, but also see well known ones with a nice twist.
Check out the screenie featuring corrupted villa - now that is some nice work FC! 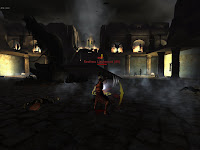 Cons:
- zero replayability,
- same rewards for everyone,
- no challenge at all,
- very short,
- the boss that gives the pet reward was bugged and keept restarting after going low on HP. 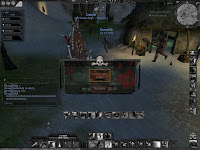 Hard to believe that the game has been out for a year and this is the first event. Hopefully there will be more in the future.