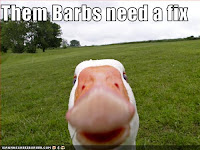 I am totally cool with Sins not being revamped BECAUSE Funcom was giving us this bullcrap about how 1.5.x series are over and they REALLY need to focus on PVE/PVP content that 1.6 provides.
So yeah, they have their schedule ,let them do their thing...

but HEY, why not sneak in some BUFFAGE for other classes while we are at it?

Lets NOT change assassin's lethargy that deals 600 dmg and -6% melee debuff, but reworking blood crazed? No problem! Fixing fatality bug? I guess that is more pressing issue than light footed not doing shit or Blindside not getting any dmg upgrade regardless of points added. I got nothing against Barbs, Mitra bless them, but this is Funcom at its best: ninja nerfing assassins (recent Lotus Tainted bLood report says that immunity prevents healing) while getting other classes what they are asking for.

and to top it off: why the hell the devs and testers are so active in other boards BUT not here? its like we are free play lepers.

Anyway, where is the love?

CLASSES
BARBARIAN
* Blood Crazed is now called Blood Fury, and has been changed to be a clickable which consumes 5 stacks of Blood Rage for a small DPS boost. (Update : This did not make today's patch due to an error. Leaving note up as a preview for players)
* Back in the Fray has been slightly buffed.
* Changed tooltip for Reaver Stance so it accurately reflects maximum stack size.

CONQUEROR
* Crushing Onslaught will now apply two separate debuffs - one for the snare effect and another for the damage debuff. The snare effect will follow all normal rules for crowd control immunities. This is to support raid encounters where a boss needs to have only one of the immunities.

DARK TEMPLAR
* Blood Hex will now do increased healing when in Frenzy Stance.
* Invulnerable Soul should reapply its buff effect after resurrecting from a PvP death.

RANGER
* Traps have been given an overhaul, and should now behave more reliably.

We don't want their pity.

fuck, it would take a "pitty fix"

sooooooo tired of every vs Barb fight being the same:

you should be an advocate Slith:p