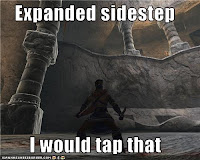 The changes to the sidestepping (double tap left or right) are probably the most fun mechanic introduced in ROGS.
In vanilla Age of Conan sidestepping on it's own wasn't that useful and I rarely it was used in pvp.
ROGS introduced passive upgrade to sidestepping which adds another buff: 10% evade when maxed 5/5.
Stacking that works
10% evade might not be all that much, but the buff obviously stacks with your gear's evade rating so going up from 7% to 17% even for 5 seconds can be a huge advantage when you consider the stamina consumption and other benefits. It also stacks with both double tapping backwards and cat's paw.
Sidestep + cat's paw - since cat's paw lasts whole 10s you should first get the cat's paw buff running and then do the sidestep. Since the buff will be active half the time the cat's paw buff is on expanded sidestep can be somewhat considered an upgrade to cat's paw too.
Buff: ~7% pvp lvl5 gear + 10% + 40% = 57%
Sidestep + double tapping backwards - backward tapping gives a mere 2s boost so you should apply sidestep first. With the animation lag that comes with sidestep you should get around 2s when both evade buffs are present which is more than enough to dodge that nasty axe going for your neck.The added benefit is that you will quickly gain distance from your opponent WHILE getting more evades so it's great combination for breaking melee contact and getting out of weapon's reach.
Buff: ~7% pvp lvl5 gear +10% +25% = 42% (that's FREE cat's paw equivalent for 2s on extremely low cool down)
If you really want to get crazy with it you can stack on 3 evade buffs:
Buff: ~7% pvp lvl5 gear +10% +25% + 40% = 82% !!!
Added benefit:
The extended sidestep will still grant you 10% immunity chance (15% totally with pvp gear) which is an icing on the cake and might just work at that critical moment. The other and much more useful thing is that all sidestep (just as double tap backwards) will prevent opponents from knocking you back if its timed right. Great example would be Barbarians slow animation on knock back: do the sidestep just as knockbacks animation finishes and you will be pushed backwards, but you will land on your feet. Work both in pvp and pve and it seems to be a feature and not a bug - Funcom is not sure about it (how come you guys don't know this? You are in charge of that shit).
You can also direct your movement by holding the right mouse button and turning it around. Not only will you get the buff, but it is also a great way to quickly get at your opponent's back. The video demonstrates the movement.
Summary:
Extended sidestep will benefit you in both PVP and PVE, melee fights and caster fights and it comes with no penalty (as opposed to double tapping backwards which also applies debuff and has longer cool down).
It's a cheap perk to get, it's passive, very fun to use and it will upgrade your survivability in a noticeable way. It's also very "assassiny" in its nature.
Posted by Slith at 3:38 PM