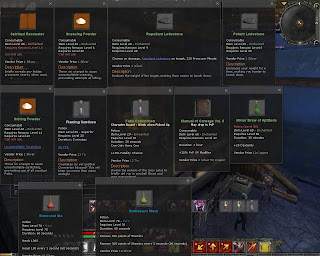 The following are the list of consumables that you can get for pvp. Here is how they work:

Spiritual Resonator: Not many assassins have access to this because it requires being in 18lvl renown guild. Upon use it forces people out of stealth. A-must-have item for obvious reasons.

Sneezing powder: This will prevent your opponent from going into stealth. This will be very useful in open world pvp where people can actually run away from you and try to get into hide.


Repellent stone: this will downgrade the rank of your target's armor. Assassin's snap kick is working on all armors up to medium. So to take advantage of this item you would have to target a soldier wearing nothing but heavy armor. Too much hustle for 10s.

Potent lodestone: this item will upgrade your armor up one rank. After applying this you will be treated as light armor in terms of knock back resistance. Since every single class in game can knock back light armor it use utterly useless. The only class that can REALLY take advantage of this are medium armor users (ranger, BS)

Rating: it does nothing.

Flaming Saduca: More of an cool gimmick that actually useful item, but it will make you look like you are burning. In a heat of the battle this item might just make you look like some Demo/Hox proced fatality on you so you will be ignored as target...or not. Still beats stones for the price alone: FREE (found in chests in OT)

Fatal Concoction: It will give your 10% fatality chance which stacks with your other buffs. 20% base fatality chance + 15% from relish in death + 10% fatal concoction = 45% so almost free brutality. It can be found in chests in OT. One fatal (oh the irony!) flaw: you can only carry one.

Manual of Carnage: it gives 5%, 10% and 15% pvp xp gain boost which speeds up leveling considerably. Make sure to carry no more than one because those can drop in world pvp (not in a minigame thou). Always have it running when pvping.

Minor Brews: rewards from quests in Khitai, can be also bought from factions. It gives small boost, but every bit counts. Go for +dex, +critical or +const.

Blue pots: A lot of players are bean counters - they will squeeze every penny and the thought of blowing 1g on a one time consumable is dreadful to them. In reality those are real battle turners that can and will change the outcome of pvp scenario. I would spend 1g on a pot if it ment winning a minigame, would you? Of course you should use them in EXTREME situations, but those will happen and you better be prepared. Blue stamina pots are amazing for flag running with accelerated: the weight of the flag will drain stamina pool very fast and the pot will make sure you are not out of steam until you have delivered the package.The healing pot is of course for healing.  You can also get those for useless tokens dropped by the mobs, in fact it the best way to spend those tokens.

Also don't forget to stack up on best food and healing pots (sold in guild city with 2m timer).

Special thanks goes to Lora from forums.assassinshideout.com.