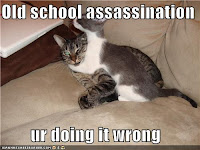 Recently I have tried doing Lotus/General for PVP and PVE. In PVP it was doing ok (far from what hybrid can achieve), but because of shard management it lost its Lotusy vibe.

In PVE I got my ass handed to me by mere 2-3 Chosain mobs (a laff for hybrid).


I do feel this strange nostalgy for old assassin and people claim it was the days of skill and fun. Was it really? I have a luxury of owning a blog where I can actually get my ass into time machine and see what 2008-2009 Slith thought of assassins:

I would NOT want to go back to that.

I do feel the nostalgy vibe creeping up on me (played for 3 days with Lotus/General last week), but speccing back to hybrid makes things fast, fun and bloody.I run from no man.

In 1.5 people specced Lotus because nothing else worked and this I how I felt about it: "It boils down to using EVERYTHING you have, whenever you can on whoever you can". My skill bars were non-stop on cooldowns and it was all about pre-loading GC for snare/debuff and pounding with SS rotation.

In 1.4 things were a little different, but again HYBRID reigned supreme.
If anything 1.4 HYBRID was biggest EZ-MODE we had so far:


1.4 hybrid was much more powerful, easy to play and noob friendly than even 1.6 assassin.

Allow me to remind you:

I have made pvp lvl4 by killing people in Keshatta while they were surrounded by several other players: assassins unholy armor, magic res, total immunity to magic (lotus overload without CD on proc!) and total immunity to CC (avatar + excellent balance) made it possible.

Nowadays if you charge into group of players you will get your skull split.


Playing since may 2008 I obviously enjoyed every incarnation of assassins (remember when GC did not have snare? I bet you don't, reroller :D), but assassin revamp and Rise of the Godslayer exp pack made things much more fun, interesting and compared to 1.4 hybrid: challenging.

1.5 was bland, boring, unimaginative gameplay with gimped class: the challenge was playing in a way that made obvious design flaws less severe. You got less for same amount of effort.


I will remember the best about 1.4-1.5 and hopefully forget the worst, but I fully embrace what the revamp brought to the assassin table: the only problem is that there is just not enough time to kill them all.
Posted by Slith at 12:34 PM