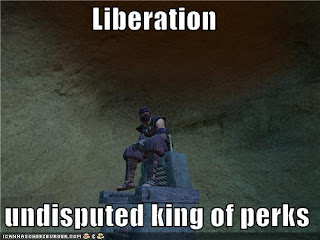 After the 1.6 patch which has brought assassin revamp the hybrid again reigned supreme after losing to lotus/general for patch (screw up) 1.5 period. Assassins have lost 2 factors that made 1.4 hybrid work so well even without any "dedicated" anti cc: avatar of death which gave total, global immunity to any form of CC (those were the days...) and unholy armor which made us so resistant to melee that CC lock down did not meant instant and gory death.

Lets forward to 1.6 and we have high damage, but low survivability class that relies heavily on dispatching the enemies while keeping them in lock down. It might not be a huge deal to guardian to be stunned for a couple of seconds, but 7s fear on assassin is a death wish.

The ROGS brought the AA system with it's perks.
Liberation perk which is granted to all rogues via archetype tree.

What makes liberation perk so great? Fully feated with 5/5 it grants:

Considering it's wide usage, damage buff and the fact that you don't have to gimp your damage/survivability by adding point to general tree in order to get escape artist/agile mind this is the KING of all anti ccs.

This is the first perk to get and max out. Period. There is just nothing in AA for assassins that would add as much as this perk does. I recommend spending one point in each of anti magic / anti cc perks until you can start adding points to liberation. Even with mere 1 point this perk still grants you all of it's anti cc abilities, but has a horrid, long cool down and low damage upgrade. Still it's great even with 1/5 so if you are aiming for other perks first ADD ONE POINT HERE!

There are 3 ways you can use this in pvp: preemptive anti cc, anti cc and damage buff.

Preemptive
Perhaps the most tricky and risky way of using liberation is taking advantage of that 5s window which is granted via immunity to snare or root. One of woes of fighting rangers are those damn traps which can also root you while charging with From The Darkness. If caught in FTD animation you will not only lose the element of "instantly-in-your-face", but also CD (FTD goes on cool down if stopped via cc) and the root that would be applied on your opponent. The 5s window is only good for that timed FTD, but it can secure you some kills.


Damage Buff
Most of the time the damage buff that will come with this perk will be just an "extra something", but do not hesitate using it also as damage upgrade: combine it with avatar of death for an added health leeching power.Of course liberation must stay as your main ani CC, but your goal is laying down a kill through whatever tools and means and only 2 m cool down on liberation encourages it's wide usage.

Backstab
Liberation won't break your stealth upon usage. When I found out that I did't really know what to make of it: why having anti cc be usable in stealth AND NOT ACCELERATED?
An old cutter Pumpkins pointed out in comments that it can serve as backstabb damage upgrade. It sure does! You can also use avatar of death in stealth and even stack both aod and liberation buffs for bone crushing backstab!


PVE usage
To my surprise liberation won't break the CCs applied by mobs. Tried it on stun and root (you can get root webbed a lot in Kara Korum), but it didn't shake off the CC. Still you can take advantage of great damage upgrade for full 15s.
Posted by Slith at 12:18 AM

I agree with you. All classes have this anti cc, and it's a great tool to have. You'll hate that others have it tho. Nothing is more dangerous than losing battlefield control, and I can see sins in a frenzy after placing the root just waiting for the anti cc to pop. =)

you can use liberation in hide too.
boost the damage from backstab.

Yeah, I found that yesterday

Chocking powder can be used in stealth but will break it.

Thats a good tip thou P, I will update the guide with it;

and avatar also can be used in hide without breaking it