[Guide] Fatality and YOU 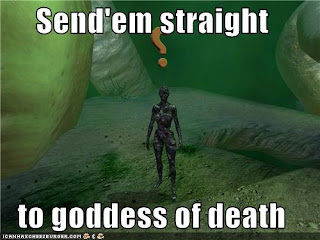 It is time for a little update to my old old brutality guide. Some things have changed, some are now better and of course you can enjoy the stunning visuals of dream world engine's zoom in on fatality.
What is fatality?
Fatality is an killing animation that procs on killing hits. Not only it is a signature move of Age of Conan mmo, but it's also very beneficial to your character: 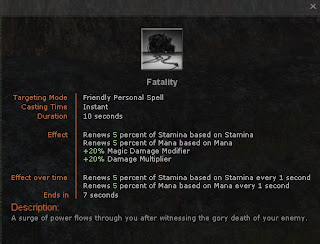 1. you cannot be harmed during the animation,
2. animation cannot be interrupted,
3. you are still healing/regenerating during animation (from pots, hots, etc.)
4. you are dealing AOE damage to mobs/players in close proximity to your victim,
5. you gain great +20% dmg buff for 10s and amazing stamina regen.
How do I gain fatality?
Fatality is a proc. It means that you have certain chance that your spell/combo will proc the animation.
There is but one catch: you combo, spell or miasma has to be a killing show. It means that the damage dealt is higher than your target's HP. High damage spike is preferable and more reliable. For some reason landing combos on the side of mob/players that has shields stacked will proc fatality less often.
Here is what can proc fatality for assassins:
1. All combos. Death Whirlwind and Grave Blossom are preferred for their great damage spike.
2. Spells. Soul detonation and Face stab + SDS/GC often proc fatality.
3. Pure miasma. Even pure Face Stab/Soul Strike can proc fatality.Lotus dart can do it too,but on chickens ;p
Are all fatalities the same?
No. Some animations are longer than others, while some finishers won't give you animations at all. Here is the breakdown:
1. All combo proced fatalities will give animation on human type MOBs and players
2. No combo proced fatalities will give animation on non-human, humanoids or animals.
3. No miasma or spell fatalities will give animation - regardless of target type.
Without animation you will only gain buff. You lose precious invulnerability time in animation and AOE damage, BUT you can use your the fatality buff longer and more actively because you are not locked in animation.
Is there cap/cool down on fatality?
No, you can proc them as many times in a row as you like. In fact fatality is most beneficial for its "chain-killing". You can get fatality, after fatality and by doing so you can take down LARGE amount of mobs which you wouldn't be able to kill otherwise because of your hit points.
How can I improve my fatality chance?
First of all your base fatality chance is 20%. That on it's own is pretty damn good. There are several means of upgrading your fatality chance:

1. fatality rating stat - utter crap. For example 40 fatality rating gives 1.1% fatality chance. Its a rare stat anyway. Do not sacrifice other stats for this.
2. brutality (feat, 3/3, +50% fatality chance) - you can read about it here. In current build hybrid reigns supreme and general tree is largely underpowered for assassins. Therefor brutality is hardly seen nowadays. If against your better judgement you are going deep into the general tree then pick up this gem. It is still worth it and stacking it with relish in death makes it better than ever.
3. relish in death (feat, 1/1, +15% fatality chance) - best feat you can get. If you are going with hybrid build I simply cannot imagine anyone skipping it. It upgrades your fatality chance to whooping 35% and you will REALLY notice the difference. It is passive, cheap and reliable. What else would you want? Mandatory for both solo PVE and PVP assassins. 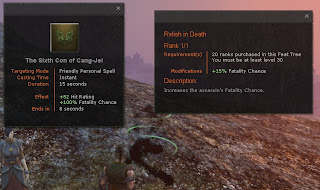 4. The sixth con of Cang-Jei (pet, +100% fatality chance, +82 hit rating) - the king and queen of fatality. Period. You can buy this pet for mere 30g and 800 MOAs at rank 4 from Shadows of Jade faction. This pet has 2m cool down and it does what is says: 100% fatality, like always, all the time. The buff lasts 15s so you can really chain-fatality the mobs. There are only 2 downsides to this gem: it cannot be combo molded and it's usable only in solo instances and open world (out side the Border Kingdoms).
1. combo mold - you cannot drop this pet during animation (unlike brutality). You can use it between combo steps thou.
2. open world - you won't abuse this in minigames or while doing Bori which is damn shame. It is however a great addition to your solo PVE and open world PVP.
Tips from brutality guide are applicable to this pet.
There is absolutely no reason not to get this pet. If you are going to buy JUST ONE Khitai pet make it this one.
Posted by Slith at 2:01 AM

Have been wondering about this.. thanks!

Fatality servers are one of the computer systems internet service company. On account of bigger place regarding people above the game play pick game titles does get ensnared and engaging. Now experts relinquish its awareness and then indulge his / her huge pleasure. However right now fatality servers happen to be below we could guarded and therefore lag-free game understanding at the best quotes. Someone can visit a internet site https://friendster.io/read-blog/1244_shocking-facts-about-fatality-servers-told-by-a-expert.html to get full tips relating to server hosting.