Age of Conan: things that really get under my skin 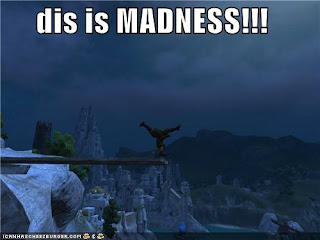 There are few things in Age of Conan that are driving me insane. I find myself SCREAMING at the monitor when those things happen. My head shrink (aka doctor) said it would be very therapeutic for me to vent those feelings on me blog and share it with the rest of you cutters. Who knows, perhaps some of this also drives YOU crazy?

Open world treasure chests - aoc had given "treasure" a new meaning: its worthless junk, hidden around the world. Would you call 1 esteem token and a daggamalt pot a treasure? Yeah, more like TURDsure (see what I did there?). Sometime I am wondering why am I even bothering to open those shit boxes.

Trader - aoc has to have most broken economy in all of mmos. With useless crafting, very rare recipes, drops being BOP and no world epic there is hardly anything on trader. Hell, you could have quit the game in may 2008 and come back now and you would see same crap being sold. It is hard to imagine that in some games trader or auction house is a minigame of itself: there is always something shiny to buy or sell.

Crafting - I have posted on this already so just a reminder: still here, still broken, still pissing me off. I love crafting, but what is being offered in aoc is 1990' MUD style crapfest.

Mob drops - one of the insanely addictive aspect of MMOS is that the very next mob could drop some amazing item. Not in aoc or to be honest: not in Khitai. While the old world mobs can spit out some blues their khitaian counter parts will only shower you with bags from which a shower of garbage will fall out. I have spent in Khitai like a year and during my solo PVE I have been getting around +10 bags a day (from drops and from digging in Kara Korum). To this day I got like 4 blue items out of it. There are some LEGEND of equally mythical few players that got an epic drop out of it, but I don't think I believe it.

Random vs Random minigame pvp - Seriously, pull you head out of your ass Funcom. I have QQed about it few months ago and its still here. I got an advertisement for your pvp FC, feel free to use it: experience epic randomness of minigames with people you don't know to create teams that you won't like.

CC - as of 2.2 CCs are back to being reasonable. Loving the change both in PVP and PVE

Faction progression and MOAS - another great change. It is no longer a living hell to progress through ranks and the MOA gains are great. It should have been like this since day 1.

What drives you nuts in AOC? Drop me a line in comments.
Posted by Slith at 2:08 AM

Guardians, and demos makes my scream and spile bile ;)

The crafting has been one of aoc's weakest points since launch, it is so unbelievably flat but it could be so so much more. Also, all of the paths should be removed from the game, with exception for path of asura.

dps classess getting much more xp in every group activity than anyone else.

Yeah the crafting in this game pisses me off beyond belief. But overall I'd say it's still a great game and worth the money. Great posts =) following! Check out my blog too

Polearm guardians (sins with plate + 18,000 HP). I'm full T2 and I get chopped down with two combos from certain guards.

PVP matchiups are beyond terrible. Bring back a premade queue and let me pug a group and balance it myself.

Lastly...the community. I want to tear my eyes out everytime I see a "nerf sin damage" post. It's OK for their class to drop 3K damage, but if a sin does it to them they want it nerfed. Ugh...

I would love FunCom if they introduced paragon creatures, just like in ultima online. A paragon in uo was a stronger version of any type of creature, and when mobs/animals etc respawned after having been killed there was always a small chance that they would spawn as paragons. The mightier the creature the bigger chance of an artifact dropping. It was always so rewarding getting an arty from a paragon rat;) I think the game needs world drops of the epic kind.

About this LEGENDARY epic drops in khitai - legends are true. Friend from my guild drops an epic dagger "Soulreaper", and gave it to me.

See my profile on yg: http://aoc.yg.com/profile?h=nnytw3rV

Pity that yg refreshes once a month or even less.

Keep posting your guides, I check your blog every day. You are doing a great job!