Dagger and a bowl of rice ep.7: Shadows of Jade 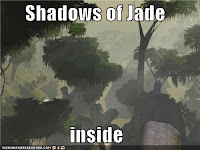 Recently I have been pretty dry on content to do. Yes, there are some epic items I want to buy with my rare tokens from Apostate runs (that's new solo instance), but lets get serious: it will be MONTHS before I will get 1 item (so far I have 50 tokens, WTB 100 more :X). That's hardly a content. I have made up my mind to do a crazy thing: I have ditched my rank 4 Brittle Blade (even thou I WANT their epic death's ward ring) and started Shadows of Jade. I remember how couple of months ago I have decided to go with Brittle Blade because Shadows didn't seem cool enough. Well they certainly have a little different vibe. First of all I have fallen in love with Shadow's gear. 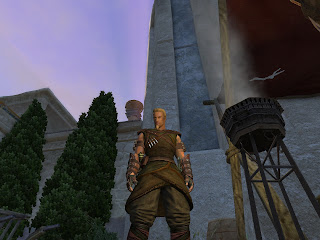 Honestly I have craved it ever since I have seen that youtube video showcasing Jade armor. It reminds me of good old armors from vanilla AOC: simple yet detailed, very assassiny. I have collected quite few pieces of Jade armor and looking forward to upgrade it further. Having very advanced BB set (2 epic items, 1 dungeon upgrade, full solo gear)  there is difference between performance (in favor of BB DPS monster of course), but its not game breaking. I like this armor so much that I will willing to have it on all the time when social tabs are introduced to the game (could it be SOOOON? Check out GD letter. Is it the big surprise? Hope so.). Beside for some reason I find thief vibe to suit my character better than his original class of assassin. Its like Garrett vs Altair. For me Garrett is just cooler.


I could NOT have done it. Period. I had to used like 70 of my veteran tokens to push myself through all the story. Good thing that the faction revamp is right around corner because I am 100% sure I wouldn't have leveled any faction to rank 4 the old fashioned way: through PAINFUL grind. The revamp in 2.2 will introduce 20h cool down on quests, but at the same time it will add a lot more MOA rewards (like instead of ...2 MOAS you will get 16 for same quest, sounds good eh?) and faction rep. I want to check the story from all perspectives which means leveling all the factions to rank 4.

Apart from great armor (at least visually) there are 2 things that I want from Shadows: the pet and the pots. The pet gives fatality chance (which is great to stack with +15% fatality chance from relish in death feat) and the pot is good for some pvp. I plan to stack up on both Tiger's and Shadow's pots before betraying them.

There you have it. Give this faction a chance is you are just starting out. A lot of people are running in Brittle Blade gear so it will give you that distinctive look too. 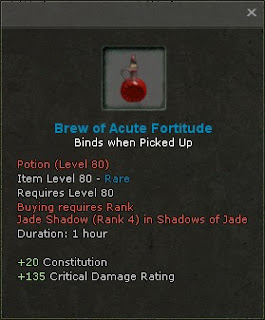 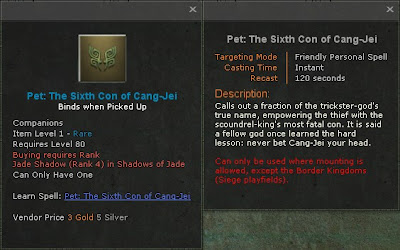