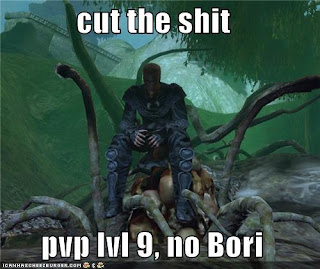 Ok so it is here: old school, purely minigame-grown pvp lvl 9. It is also the very first level in my Age of Conan gaming that didn't give me squat. Nada! I have no desire for Bori gear (the stats difference is marginal at best anyway) so there is absolutely no benefit for me for reaching this level. That's some damn good game design!

However I have noticed a MAJOR shift in minigames quality on Fury: much less ass-hats, less complaining, better team work.
I remember how horrified I was when for the first few days on Fury I have seen people going for kills and nothing else. Such is no longer the case.

Overall getting to pvp 9 was suprisingly easy and fast.For the duration of the last 20% I was using pvp xp books and cash-shop pvp pots, but the rest of the level was pretty much unbuffed.

Another thing was how pleasurable and more skill based the pvp has become after the CC changes. Honestly I cannot simply imagine how we could ever have played this game in any other way that with casting time and being able to knock back all the classes.

Even the dreadful SAG 12 vs 12 minigame got improved since its initial launch and it is no longer "rush center + keep that sucker".

It is all good, but sadly there is simply no carrot to be had in this scenario: I will push pvp lvl 10 eventually and it will be pretty much same as getting lvl 9 with no reward waiting for me in the end. Part of the fun in pushing the pvp level progression was getting that sweet, sweet piece of lootie and  non-Bori players are deprived of that "completion" feeling that was always associated with dining another pvp level.

overpower any player that hasn't been pvping since 2008, but how hard would it be to allow me to buy new hair style, tattoo, social cloak or a pvp mount (yeah, where are THOSE?). You know: all the fluffy stuff that makes your e-peen all that little bigger.

And last, but not least: the tournament mode. It was supposedly designed as "Premade vs Premade minigames for bragging rights". That "bragging rights" made me go "oh noes!". Yep, that is a key word for "it will suck".

Since patch went live I couldn't get A SINGLE game in the tournament mode.  Everytime there is a team signed you can bet its a Bori farmed pvp lvl 10s with pretty much perfect setup when it comes to class composition. In opposite corner we have: you and pvp lvl 3 friends and no tank. Enjoy! The rewards are also the same which says: more work, more preparation, harder fights for.... same reward. Totally makes sense. How come developers can think of "Hardmodes" with epic rewards for those that are willing to put in a little more effort, but the same rule cannot be applied to pvp. Remove hardmore tokens and epic items from Hardmodes and make them "for bragging rights" and see how many Pvers will flood those instances.

Bragging rights my ass!
Posted by Slith at 3:06 AM

Hi! Love your blog and I've been following since I randomly found a link in the AoC forums.

Your comments on the re-enabled premade queue has compelled me to respond. I'm glad the queue is back. Though it does not get much play, it is as it should be.

This is speculation on my part, but I believe Funcom originally disabled premades for two reasons: 1) Premades stomping pugs killed the minigame scene. 2) Some guilds were farming minigame tokens by trading wins to exploit the system.

Bringing back the premade queue with no rewards prevented both of these problems from re-occurring, while allowing those players to still engage in organized, competitive pvp.

It "is as it should be" because when you take away the exploiters, and the pug stompers that can't handle an even match, all that's left is a small group of people that want the toughest, most aggravating, most morale-crushing, yet most rewarding level of competition. Another use for the premade queue is to train players who are interested in learning, if they have friends who are willing to teach them.

Thanks for commenting. All the reasons you have listed are valid and resonable: compared to pug stopming the new random minis are a bliss.

I do, however, miss grouping up with friends for some guild vs guild action - that was the most fun I had in aoc.

Seems like without proper motivation in place the regular pvpers (just guys like us, without uber group with hand picked classes) just don't do premade vs premade.

If you had 1-2 hour to play in a evening (like me) would you put all that time and effort in order to have *a chance* at doing some group pvp or rather would go straight for randoms and hope for the best.

Seems like most people will rather try their luck with randoms saying: "bragging rights my ass".

There is hope: Game Director responded on twitter that they will consider some kind of fluff vanity items are the rewards. Thats something.

The real problem is that there are no rankings in place and no rankings means to place to weave your e-peen around. Being in servers top 3: now THATS a bragging right.

Rankings for premades would be pretty cool.

FUncom should give minigames played at tournament mode 5x more pvp xp. They are made for pvp levels 6+ , they should give them a reasonable reward - and thats something the most needed pvp xp - its really hard to level up without bori at this level and you have more than enough tokens from minis for gear. Now we have no rewards and thats the matter why minis in tournament mode arent so often going on.

Premade queue will never work taking in account best armoured and full AA players tend to gather together and there is low population. This queue could work with servers crowded, not in this moment.
As no-bori level 10 I felt the same when I hit lvl 9, anyway I continued fighting till reaching 10,5 and 5k pugs. The only reason was the fight itself, and the pride of fighting without those perks derived from Bori (armour and AA perks). All about fighting against buffed miners.
GL