Age of Conan: The God in the Moon 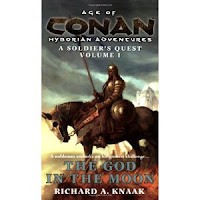 After reading all of REH Conan books I have been left hungry for more. Naturally I have turned to other, numerous Conan books, but quickly realized that those are poo (and by that I mean shit).

Not only the authors butchered Conan character (Conan praying to Crom? Me not think so!), but also continuously shown lack of basic knowledge about Hyboria.

Enter   Age of Conan: The God in the Moon by Richard A. Knaak.

The book is about Nermesa Klandes, young noble officer in the army of Aquilonia. The young lad idolizes Conan and joins the army to fight picts in the battlefields of the Westermarck.

First of all the story takes place in the pictish wilderness. I didn't enjoy this setting whole lot in the "Beyond the Black River" so I might be biased towards "The God in the Moon" because of that. Like Picts? Then you will digg this.

The story unfolds very, very slowly and for the most part of the first chapters its a yawn-fest. But then again Mr. Knaak did very well when describing the sword fights and battles. It's not REH, but still very dynamic style of writing.

The book's strong points is that it is very well researched. At first it seemed like the author is trying to put as many Hyborian words in the first chapters as possible (Bossonians, Gundermen, The Iron Tower etc.), but as the story unfolds it becomes more and more subtle. I have really enjoyed how old pict was talking about distant future when they bring down Aquilonia (check The Hyborian Age).

The author also did justice to Conan. The King makes short appearance, and pretty much acts as Conan. Zenobia also is portrayed in "The God..", but the author clearly drew his inspiration from Dark Horse comics, by showing that Conan threats her as his equal (which doesn't come up in REH story). Whatever, both Dark Horse and Marvel (King Conan series) did it so I guess it is ok.

The only thing that really annoyed me in this book was author overusing "blurry shadow leaped from the tree" motive. Seriously, if you were taking a shot of vodka every time someone jumped down from the tree you could get yourself pretty messed up.

Verdict: The book is entertaining in it's decency. Its decent at best, but it seems to be sufficient.

If you have finished up with all REH stuff give those books a try.
Posted by Slith at 12:19 PM

Buy "The Religion" by Tim Willocks. It will slake your thirst for a more robust read.