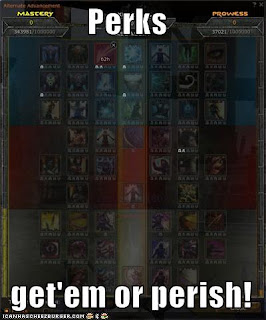 Keep in mind that this guide is geared towards solo pve / pvp. If you want to raid then it might not be the best choice (most certainly it won't). I haven't covered PVE perks that are related to raiding at all.

I will talk about MPs (main perks, aka those you put on your bar) and SPs (side perks, those that are passive).

If you are just starting out..

Here is what you need to know about AA system:

Perks is what you get by investing AA points. Feats are what you get from you class tree and put on your regular bars.Perks need to be put onto your special perk bar before either you can receive benefits from them (passive perks) or put those on your regular bar (some perks give abilities that can be used just as regular feats). Some passive perks doesn't need to be put onto perk bar to benefit you.

There are 3 main "trees" or segments in your AA window: general segment, archetype segment and class segment.

For example assassin can get perks from general segment (all classes can), rogue segments (barbs and rangers can get those too) and assassin segment (assassin exclusive).
When it comes to perks you can only use 2 of each segment at the same time. So for example: 2 from general, 2 from rogue and 2 from asssassin.

There are 3 types of perks: Gray, Silver and Golden. Gray ones are passive so you just add points to them and they are providing benefits. Silver ones has to be put onto perk bar and take up 1 slot. Golden ones are sorta "ultimates" supposedly powerful perks that take 2 slots on perk bar.

Right now there are pretty much two viable paths for assassin to take:

Damage Sin: specc based on providing constant, high damage while cutting through armor via high amounts of penetration.

Field of War - great source of damage. Upgrade to your pvp combat and magic damage ratings.

Precise Strikes - added penetration. It allows some of your attack to bypass armor/anti magic defences. Its a great addition to your Precise Strikes feat from corruption tree.

Liberation - anti CC and a source of damage. Pretty much the king of perks. Read up on this here.

Tainted Weapons - removes HOTs (heals of time) from your target. Mandatory for PVE, but also great in PVP.

Sins of Flesh - Costs 1 soul shard upon usage. I like this combo because it is better than Swift Strikes. If you use it on healer it also makes his healing less effective with it's debuff. What I also like about this is that you need just 1 point  in this (1/5) to get maximum damage out of it. Even if you are going to get other perks later on you can still get 1/5 in Sins of Flesh to have great replacement for Swift Strikes.

Castration - Grants 2 soul shards upon successful use. It replaces lethargy combo. Bit slow animation, but you have to fill that second slot with something anyway. When it crits this combo can do massive damage and getting two shards out of it saved my ass more than few times. Regardless of points put into you get same damage, but the chance to get shards if higher.

3/5 - it gets more reliable, also usable

4/5 - you must be very unlucky to not get the shards. Pretty much always works.

Critical Sin: this build relies heavily on dealing critical hits (with proper gear you can get it over 25% chance to crit) and then making those critics bypass enemy defences.

Pressing Strikes and Decisive Strikes - your bread and butter. It upgrades your crit chances and damage those crits do.

Liberation and Tainted Weapons - some perks are irreplaceable. See above.

Since the recent CC changes previous golden perk Choking Powder got changed and now it has casting time. It used to be great perk for Damage Sin build, but it seems like its no longer viable. You can still supplement Damage Sin build with Master Assassin perk if you don't like the combos.

Keep in mind that Master Assassin perk doesn't work in PVE at all.

And now which Side Perks to get:

All "Wards" perks - those are anti magic. Max them out.

All "Resistance" perks - those are anti CC. Max them out

All "Empowered" perks - those upgrade your damage with face stab/combos. Max them out.

Expanded Sidestep - gives extra evade. Check it out here.
Finely Honed - removes bubbles and shields (but only mage shield and bubbles gained via AA points). Mandatory for PVE and great for PVP. The only passive perk that gives ability that you can put on your bar without it taking up the slot on the perk bar.

Which Side Perks NOT to get:

Immeasurable Empowerment - gives good amount of all stats. Perhaps this is good for hybrid classes like BS and HOX but not for sin.

Empowered Momentum - gives damage if you stun someone with momentum (double tap forward to get "momentum" and attack to have a chance to stun). Fully upgraded it does 250 damage on Chosain Mob. Sucks beyond belief!

Arcane Plunder - gives magic immunity. Perhaps as we get more gear budget stats in further expansions it will make this interesting.

Dance of Death - upgrades Impede Life combo with hit rating debuff. The problem is that everyone has insane amount of hit rating so this does next to nothing.

Which Side Perks you MIGHT want at some point:

Extended Lethargy and Impede Life - makes debuff from those combos last longer. Very very bottom of your perk priority list. Might want to get it 2 years from now.

Chromatic Warding - gives insane amount of anti magic. Might be interesting for sieges.

Fortifying Empowerment - gives good amount of Health. Might be interesting for sieges.

Great guide, thanks a lot !

Avoid Entrapment is imo one of the best perks in archetype. Can't believe you don't appreciate it :O

you have to trade either tainted weapons for it, or liberation.

Not worth it for that reason alone.

Dance of Death is not that bad accually as it adds a miasma too that when it crits does great damage :)

Slith I disagree strongly with advocating the use of Field of War on an assassin. Critical hits are a key part of a pvp sin's life and Pressing and Decisive are much better perks for this. Constant damage is not as useful in pvp as big hits. I would take those feats over the so-called pvp perks any day.

I have presented two valid builds with both field of war and crita-sin. Feel free to pick one.

if you invest in critigetion general park, you also gain passiv critigetion, wituath point there, the t2$t3 Pvp armour is pretty worthless

Regardless of whether you are a "crita-sin" or going for flat out damage, you will get more damage from Decisive and Pressing than FOW and Precise. As far as advice for new assassins go, I would strongly advocate against those two perks. It is a lot of time training and you will get much more benefit in both PVP and PVE from Pressing and Decisive.