Dagger and a bowl of rice ep.8: Faction switch 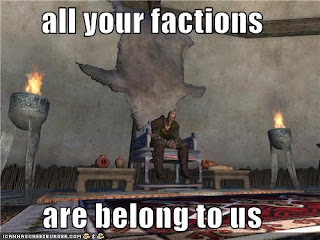 Can you tell who's chair I am sitting in this picture? Of course you can't. Let me give you a hint: its in Hyrkanians camp and this crappy pice of furniture used to accommodate some very important ass.
Used to, of course, before I slew the owner of this chair - the War Chief -  and by this blood letting I have fulfilled my vengance that I have sworn against the Hyrkanians (aka BULLSHIT faction). Today I have actually completed my total faction switch. That is right: after dinging all factions to rank 4 I have decided to check out every single opposite faction. This is done purely for the story because that is ROGS strong point.

For example I simply LOVE the clever use of lore in Children of Yag-Kosha quest text:

Here is what can be found in the "Tower of Elephant":

Let me be free of this cage of broken blind flesh, and I
will once more be Yogah of Yag, morning-crowned and shining, with
wings to fly, and feet to dance, and eyes to see, and hands to break.'

Quest giver asked me to kill some Yuns and although he hated this act of violence he told me that Yag has feet to dance, but also hands to break. Delicious! 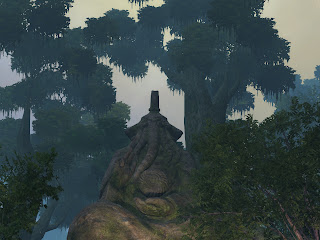 It gets even better: when ask why are they are praying to dead god the Children responded that their players are still working because the death of Yag is not the death of a man.


The life of man is not the life of Yag, nor is human death the
death of Yag. Let me be free of this cage of broken blind flesh, and I
will once more be Yogah of Yag.

I love how much lore Funcom writers were able to squize out of one mere story.

The Wolves are ruthless and it is a nice change from Hyrkanians which seems to be spending their time drag-racing on horses instead of fighting.

Scarlet Circle so far (rank 2) is a little disappointing. It is like the writer is trying too hard to make them look evil enough. I get it, they are evul!!

Since I have re-joined Brittle Blade (previously betraying them and getting rank 4 with Shadows) I have noticed an interesting thing: you cannot re-do the story. Once you have beaten certain faction you can only do the repeatable quests and not the main story. On one hand thats nice because some mundane, low level quests are best to be done once and forgotten, but at the same time I have been looking forward to meeting the Death Goddess again and asking her a question (probably something about next expansion).

I do have some hidden agenda too: right now I am actively looking for best faction quests to chain together into ultimate 55m minute run that will give MAX moas possible (I hope for something +300 moas and 2-3 rare tokens per run). Once I have discovered the route/factions set up I will be writing a guide on that. So far Children are proving to be great MOA generating faction, superior to all other.

I hope that next episode will include my total review of ROGS which I should have beaten by then. Damn, about time we have heard some stuff about next expansion!
Posted by Slith at 2:47 PM

I am a sin that mistakenly choosed wolves instead of hyrkanians. I wanted the wolf mound (acquired) and when I noticed to hyrkanian dagger was too late...

I did the hyrkanian redemption quest and I betraid wolves. Now wolves are hostile and hyrkanians yellow (neutral).

As far as I remember it takes about 40 minutes (1h if you have bad gear) of killing the mobs to reach enough rep.

Its not that bad. Certainly you don't need to reach 50.000 by killing wolves :D (as far as I know, I changed factions many times and it took about 40 minutes to do so).

p.s Hyrkanian daggers are pro :) and they have very nice design.

Thanks for your answer.