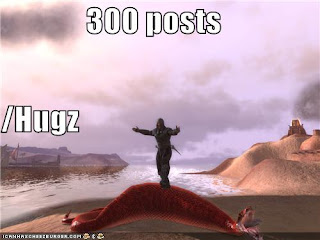 I have posted 300 times yesterday. Can you imagine this? I know I can't. Looking back at all those years it seems so unlikely that I would have stuck around for this long.
So how did it all begin? I remember back in the day I have been done with WoW for several months and been messing around with Starcraft. Honestly I have sucked at SC (since ever ;p) so I have been looking around for something to play in my pass time. One day I have found some random crap on Age of Conan. Age of freaking Conan? Uh? Conan? You mean like that movie?

The hype machine must have been switched to "Erling Ellingsen crazy" because AOC was popping up in almost every MMO site's post. I have decided to give it a shot when it comes out. I have even read some of the Dark Horse Conan comics. It was a amazing read. I remember those two very vividly: The halls of dead and The Book of Toth. Both great and those made me hungry for more.

While going through some other Dark Horse Conan stuff I have came across a name....Robert E.Howard. I have NEVER associated Conan character with books before. I was under impression that it was the movie that started it all. I have bought the very first Conan book, Lancer edition with stunning Frank Frazetta cover. It blew my mind. Even thou the books were translated to polish (very good translation BTW) the unique and energizing Howard's writing style poured from every single page. It was this very moment that I knew I have been bitten, that I came across something that will cherish till the end of my days. Indeed the black-haired, sullen-eyed barbarian and his brutal world of Hyboria captured my imagination beyond any of my expectations. During those 3 years I have bough and read all the original REH books both in polish and english coupled with a lot of comics (both Dark Horse and Marvel).

So before Age of Conan went live I have already went through couple of books and I could really appreciate Hyboria for what it was.

The start was very bumpy. Even thou I have never experienced anything game breaking with AOC client its been very sluggish. First I have bough new computer and then new video card and processor. If AOC does something right its getting my money.

I came across a lot of bullshit in this game. A LOT. There is no chance in hell I would have put up with even half of it if it wasn't for it's Hyborian setting.

Now the blog it self. It was my way to give back to the community that have provided me with so much. Back in the days of Mephs and other  AOC superstars forums were not filled with QQ and nerf requests, but rather helpful, insightful posts and even instructional videos. When the old school players quit I have decided to step up and re-distribute whatever knowledge of the game I have gained on my own and learned from others. That was my initial intention, but obviously it grew beyond that.
It became a place for me to share my ideas, hopes and yes, to vent some of my frustrations (a lot less of those as of late, this ain't 2009 ;p). Of course there were many times when I was like "fuck it, no one reads this" but I have pushed on. At last I have reached "critical mass" when I have poured enough of time and content into it and it became self propelling, a part of my life style and gaming. But it was always about the community. Friendly comments both on blog and in game kept me going because as it turns out I dig when people enjoy what I create. Furthermore the Hideout grew into a forum that apparently is more known that the blog itself since it got mentioned on massively.com.

It's been a fun ride and I can only wish I will be here for the years to come.

I would like to take this opportunity to thank YOU, teh read0rz : without you I would just be an angry weirdo talking to his iPhone on his way to work. It is you who make it "podcast done by angry weirdo" and this site an actual blog. Thank you, keep on readin' and I will keep posting.
Posted by Slith at 10:49 AM

i check ur blog every day and i enjoy it very much.

When will u make some more Bombay assasin movies ?


Munson ( the funniest assasin on mitra )

You do a great job Slith.
Keep it up!

Have anything happened with the advocate programme btw?

your wish is my command,