The Savage Coast of Turan - who are you, Ardashir?

Couple of weeks ago the "hidden" content has been discovered. It was the Turan zone and Ardashir.Now everyone knows Turan: it was very well penned out Rober E.Howard and featured in many Conan comics. The Turanian Empire is second to none in Hyboria and could rival the jewel of the west itself - Aquilonia. 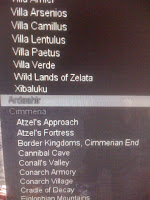 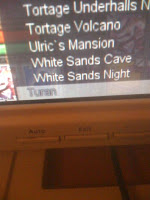 What about Ardashir? Well my first reaction was: find it on map! Is it there? Well, no. Damn. se. 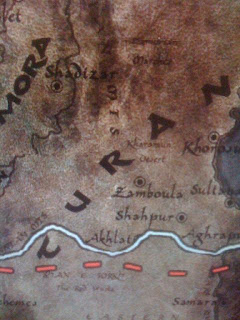 After doing a quick search on the Internets (all 3 of them) I have learned that Ardashir was featured in two issues of Marvel's King Conan (comics that are crappy ass hell, don't try it). Guess what...I went online and bought those two issues.

After couple of pages I have started to recognize the plot. The story in the comic was page-by-page Conan the Avenger by Björn Nyberg. Decent book. The story takes place shortly after the events from "The Hour of The Dragon" and Conan is already a King, traveling to.....far away Khitai!

Now the problem: Ardashir is a mere captain of Turanian army stationed in a lousy outpost in the desert.

We already know that the Savage Cost of Turan will take place 20 years after the events from the movie so if we have followed the time line Ardashir is still a mere captain in Age of Conan. I doubt there is a whole city dedicated to this sad slob.
Then came this announcement from FC:

Slated for an August release, ‘Conan the Barbarian’ tells the tale of Conan and his adventures across Hyboria. The new adventure pack launches players on exciting adventures, as they help Artus unravel the conspiracy and plots surrounding the city of Ardashir in Turan. 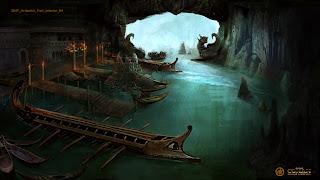 City of Ardashir? If you look closely on the artwork you will see that there is even Ardashir Fort.

So here you go, most likely Ardashir is made up by FC and not lore base at all.
Posted by Slith at 1:16 AM