PvP - on a stranger tides 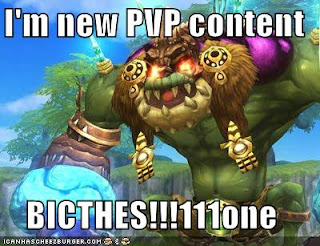 Monthly development update is in and, as foretold by Shaggy, it pretty much covers PvP additions/changes for the upcoming months. Let's go over these, shall we? (not that you have a choice).

Funcom already has proven that they are ready to take Age of Conan into a new, bold places and kick PVE in the nuts while doing so. Proof? The freaking CC changes. Thank you. Indeed there are many fixes and changes to be made in order to make more feats/perks viable choices in PvP. Rogue general tree would be such example and many, many other in Assassin tree. Good to hear that FC is willing to get down and dirty with most mundane of problems.

Resurrection system in mini-games
This one is pretty weird. Right now if you die you respawn and can re-joing the fray almost instantly. I would assume that FC will allow you only to respawn when every member of your team is dead? Sounds like slowing down the action....a lot. But on another hand it would enforce making tactical choices more meaningful. Example: the whole team bashing Priest of Mitra to a bloody pulp for 2 minutes only to find him re-joing the fight in less than 10s. Not with the proposed system. It would also make "kamikaze" style of play less effective (many assassins are guilty of this) because there would be penalty for dieng. I had my feel of this kind of game play when back on 1.6 on TL server assassins were losing all their shards upon death so it was very beneficial to last long in minis. It was a very different and intberesting experience. Honestly I can go both ways, bring it!

I would say it was most surprising and pleasing part of the letter. Both of those mechanics are CORE to the Age of Conan system and I would rather expect the Devs to roll back the game to 1.4 than to even touch that with a stick. And yet here we are. I find both of those features broken beyond belief and ruining open world pvp. Whatever changes we will get will be welcomed ones. One can only hope that the stealth changes will bring something new and interesting to assassin table. The stealth should be the name of OUR game, the rangers can keep some sort of nerfed tracking and the rest, I hope, will get shafted.
Animation and Combat updates

This will address the issue-we-are-not-speaking about. Oh wait, I am not on a forums right now? I meant the fucking combo skipping exploit. Some classes (like assassin) can literally shave-off good chunk of their combo animation while dealing same damage. Hell, assassins can skip the whole animation on Deaths Whirlwind, making the damage instant. On another hand some combo animations are so long that it really discourages the usage of such combos (Castration being one of those). The changes will make the combat more fluid, dynamic and above all: fair.


"These massive foes will spawn in locations in the Border Kingdoms, and will challenge players to organise to take them down. However, they will always appear in an open and unrestricted PVP setting, so anyone wishing to take them on will have to compete with their fellow players as well.

It also appealed on the nostalgia level, many of us on the team have fond memories of pitched battles over open world bosses or locations that you used to see in games like Anarchy Online and Dark Age of Camelot, and we want to try and reproduce that feeling for this addition.

So the next content addition will take the form of new PVP world bosses that will appear in the other Border Kingdoms."

Ok, I won't go "HOLY CRAP" on you and freak out (althou I would really like to). I have never experienced this kind of content in other games, however these are my 2 cents:

Like many I have full time job and family to take care of. I do only pvp/solo pve in MMOs for various reasons, but above all because this kind of content is always available to me regardless what time I log on. So rather making my schedule fit Age of Conan I have made Age of Conan fit my schedule.

On a side note: I am very much aware that people with same lives have also found a way to fit Age of Conan into their lives. We have, however, different approaches to this: I rather have small gaming time here and there and some enjoy having only 1-2 "raiding nights" during the week.

Back to the bosses:
Creating pvp content that can only be done in specific time frame ultimately will "force" me to show up at certain hour in order to participate in it.

This will not be an addition to pvp that I could enjoy on a daily basis. And we all know its all about ME (My Enjoyment).

It would be "ok" to have this kind of "PvP raid bosses" as a minor and just one of many pvp additions that will be made during the year. But it seems like this will not be a minor addition and nor one of many in 2011.

In other words: if this content is "time frame exclusive" I am stuck with same minigames for 4th year in a row.

I REALLY want to see this in action, but as many have suggested this content might be very hard to implement in a game without two opposing factions. What will stop the major guild from "sharing" the bosses, picking the days in a week when each of the guild downs the boss? Obviously we know very little about this content, but just having it "time frame exclusive" (and I cannot imagine FC going any other route) makes me go QQ. Time will tell (as it always does).
Posted by Slith at 12:24 AM

imo what fc means is that you'll have a random number of seconds that you'll be able to res if you die in mini and that its gonna be random where you'll respawm. At least that's whats going on in fps games as mention in the letter of the month.

There are FPS games when you stay dead till your team wins the round or every member dies. I think Counter Strike is like that, not sure thou