What mysteries do you guard, Wise Devil? 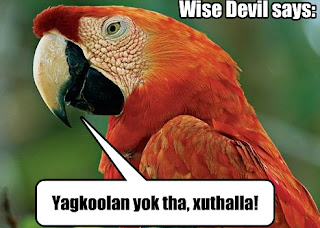 There are no screenshots for you in this post because of this:

The new content in this update, including everything in the Savage Coast of Turan, is considered to be protected under the EULA that you accept when you launch the game on Testlive. (See the section of the EULA quoted at the end of this post). If you upload any videos or screenshots of the new content on Testlive to any third party site, or if you link any posted video or screenshots on any other site, it will be considered a breach of the EULA and your accounts can be permanently

If you want to check the visuals then go to this thread on TL forums. No TL access? Sux2bUm8 and I guess you will have to settle for my mad, mad ramblings.

Welcome to the savage coast..

The Ardashir is a port city. It is by no means the capital of Turan nor one of it's major cities (such as Akif). By AOC game standards I would say the city itself is somewhat smaller than Khemi. Visually it very much resembles the architecture of Turkey or Emirates and it is what Turan should be. The city itself is "integrated" into the zone so it works very much as cities in Khitai: you can do quest/pvp inside city, but you can also, without any loading, go out side. Both new raid zone and group instance are close by and accessible. You can also go to the port and take one of the two boats (sadly "take" means "click on") to the new solo instances. The zone itself is quite massive with diverse landscape. Surprisingly you will have a chance to interact (one way or another) with some of the most famous "factions" (in traditional sense, not Khitai grind :X) in the Hyboria: the Black Seers of Yimsha (check People Of The Black Circle), the Red Brotherhood (Shadows In The Moonlight) and the Kozaki (A Witch Shall Be Born). Hell, even our good friends Children of Yag-Kosha from Khitai (far, far to the east, beyond the devil haunted towers of Zamora and wind toss waves of the Vilayet sea) make an appearance. Sadly it is a lvl50 zone when it comes to out door PVE. I myself can see several reasons for that decision:

I will defiantly give this instance a try. As I was typing this the www.mmorpg.com posted an exclusive on this. So far no word on the lootie, but I would be horribly horribly disappointed if it was lower on the power scale than whatever Khitai has to offer. Oh and there is a new type of tokens: "golden taurus" (seriously Funcom don't we have enough of those already?), but I firmly believe those will be for raiding.

The most interesting and bold content so far. Basically it is a "private" solo zone that will scale depending on your level. It is, however, by no means "a villa" type of place, but rather a large quest hub with several quest givers, main story line with a lot of side-stories. The island itself is very "moody" with dark clouds hanging above the pirate island. I am getting Tortuga vibe from it. I don't know the replay-a-bilitiy (is there such a word? Probably not) of this content, but it looks very cool.

The Isle of the Iron Statues

This one is very well done. It is a solo instance aimed at veterans. It has several bosses and it gives 2-3 rare tokens, some undisclosed items and social gear (I got some nice turban on my first run). First of all it is deeply rooted in the lore as it's an island from "Shadows In The Moonlight" story. Funcom, as always, does banging job with the immersion and the creative use of REH writing: when you take first step in this instance a parrot will fly by and scream: "Yagkoolan yok tha, xuthalla". Sounds familiar?

""Crom!" muttered the Cimmerian. "Here is the grandfather of all parrots. He must be a thousand years old! Look at the evil wisdom of his eyes. What mysteries do you guard, Wise Devil?" Abruptly the bird spread its flaming wings and, soaring from its perch, cried out harshly: "Yagkoolan yok tha, xuthalla!" and with a wild screech of horribly human laughter, rushed away through the trees to vanish in the opalescent shadows.".

Visually it is pleasing, but somewhat similar to "Dead Man's Hand" instance.

The Savage Coast looks like a pretty sweat addition to the Age of Conan and us actually watching the movie and knowing all the tie-ins can only make it sweeter. I can only hope that it is going to replace my Khitai questing routine (as I can barely stand that place anymore). I give my firm support to FC's idea of adventure packs: the more the packs the more Hyboria we will be given chance to see.

I am stoked about this!
I think they did the right thing by making it a lvl 50+ zone with instances for higher lvls.
We had a good amout of starter regions with Zelatas, Conalls and that, but when you hit 40 you have been pretty much stuck with cimmerian path. (Yeah yeah i know Nobles and Thunder... but not so big in level range really.)

I am deathly tired of Eggy mts! :P

I also think it is better to add adventure packs like this than go for big assed full-blown expansions as they can crank out more content at shorter intervals that way.

You should write moar >:O